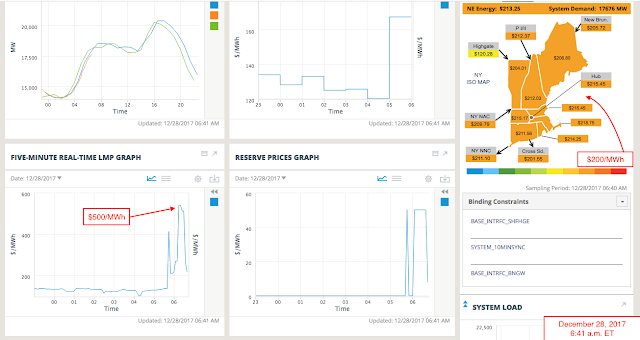 Earlier today, I posted this from a reader (this is the second time the reader has brought this to my attention; both times posted on the blog):

After posting, a reader made these observations:


The NE power situation this moment ...
Couple of observations ...
The nuke, coal and GAS fuel percentage has been 'flatlined' all day, potentially indicating the fuel/facilities are maxxed out.
Oil is currently providing 19% of the juice - approaching gas' contribution
Forecast calls for next ten days remaining below freezing (32) all day and night.
Those folks are not only facing catastrophic costs just as winter begins, I'm wondering how secure/reliable their oil supplies are if they are burning through it a such a high rate.

There is a fairly large oil burning plant in Maine that was one of the most vociferous critics to gas pipeline build out.
Easy, in these circumstances, to see why.

The reader noted, that by looking at the ISO New England charts (see below), nuclear, coal and natural gas had maxed out in New England. Having maxed out these sources of energy, what did New England turn to?  Petroleum.

Now today, Forbes has a story on exactly this: New England forsakes natural gas for petroleum.

New England has been at the forefront of converting its fossil fuel power plants to use cleaner burning natural gas. In fact, the region’s electricity generation is over 50% reliant on natural gas.

In addition, many New Englanders have gas lines in their homes and use natural gas for heating and cooking.

However, natural gas prices in New England are also the most expensive in the nation, because state and local governments have fought to keep out the pipelines needed to transport it into and around the region.

Natural gas prices across the United States dropped with the advent of fracking, and it would be easy and cheap to supply New England with natural gas from the nearby Marcellus shale region.

Several companies have tried to build pipelines to bring this gas to New England, but they were stymied by hostile local governments and ultimately by a 2016 ruling from the Supreme Judicial Court of Massachusetts that forbade utility companies from entering into long term natural gas deals with the intent of passing on charges to customers.

After the legal case was decided in Massachusetts, Kinder Morgan withdrew plans for a new pipeline.

Now New England has turned to petroleum, a source of great pollution and even greater expense, for electricity generation. Over the course of one day, December 27, 2017, petroleum use grew from less than 500MW to nearly 4,000MW.

Petroleum accounted for 22% of the electricity generation, just behind nuclear at 35% and natural gas at 24%.

It's not in the charts below, but if you go to the ISO New England link you can see how natural gas, coal, and nuclear all maxed out today, leaving New England reliant on oil for heating.

The one thing not mentioned in the Forbes article is the oil burning plant in Maine that is benefiting from the lack of natural gas pipelines coming into New England.

Looks like it's time to turn on the wind and solar farms. Link here. 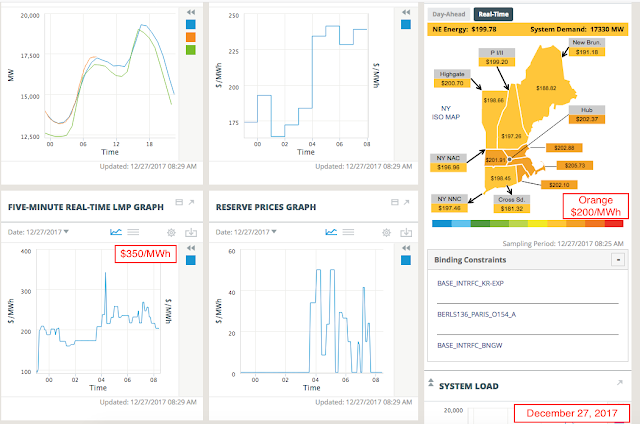