August 24, 2019: I was certainly duped, or suckered into this on. The article linked at the original post did not tell the whole story. Here's the rest of the story from a reader:

Japan is actually vigorously investing in the research, technology, and implementation of what is known as HELE ... High  Energy Low Emissions coal  burning for electricity generation.

Some of the particulars involve highly pulverizing the fuel, using an oxygen rich combustion environment, higher boiler pressures, and many other components.

They are so far advanced in this field that they are touting its buildout - under Japanese contracting - all around the world.

I should have looked at the source of the article. The source: Greenpeace.

Some will argue that there is no such thing as clean coal but that brings us to a whole new discussion for another day. Bottom line here: the bigger story here, as far as the blog is concerned, is not that Japan is still using coal, but that we  have yet another example of a type of "fake news."

Anyone who hasn't figured out the "global warming" issue is one big scam has not been paying attention.

For those who need yet another example, Don provided this link from The Diplomat, published last October, 2018, but most of us missed it, including me. 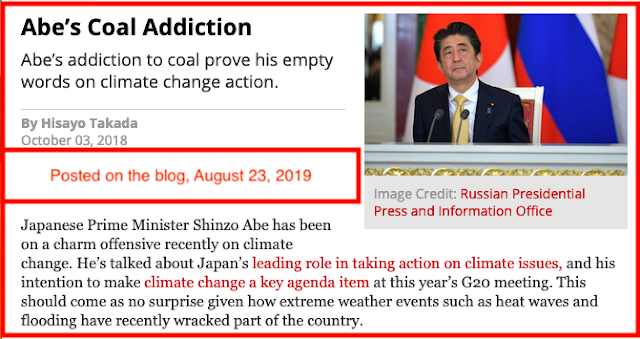 
Japanese Prime Minister Shinzo Abe has been on a charm offensive recently on climate change. He’s talked about Japan’s leading role in taking action on climate issues, and his intention to make climate change a key agenda item at this year’s G20 meeting. This should come as no surprise given how extreme weather events such as heat waves and flooding have recently wracked part of the country. [Fake news.]

But Abe’s addiction to coal shows that this charm offensive lacks substance, especially when it comes to Japan’s own energy policy. In Japan’s latest energy strategy published in June, coal remains a major part of the energy mix into the future. Currently, the coal fleet in Japan is growing, not decreasing: At the moment, 35 new coal power plant are in the pipeline all over Japan, adding to the around 100 coal plants already in operation. If all of these plants are built, 107.920 million tonnes of CO2 will be emitted annually, and according to analysis by Climate Analytics, Japan’s share of the Paris Agreement carbon budget would be exceeded by about three times.

Among G7 nations, Japan is also one of the biggest investors in coal power globally. Besides expanding the domestic coal fleet, Japan is subsidizing the export of coal-fired power plants to other countries like Indonesia and Vietnam.

Meanwhile, Abe’s stubborn push for an unrealistic amount of nuclear plant restarts is slowing the necessary large-scale phase in of renewable energy. Even though most of Japan’s nuclear plants remain out of operation and are unlikely to be brought online anytime soon due to safety issues, public opposition, and legal hurdles, the government has insisted on keeping the share of nuclear high in its 2030 energy scenario. This in turn translates to high uncertainty about future electricity generation capacity as well as hindering grid access for renewable developers.