Having just spent a couple of nights in an AirBNB this is quite cool. AirBNB is filing to go public.

You know how folks reserve a block of hotel rooms for family and friends for a family reunion, wedding, memorial service, or graduation. In an era of Chinese flu, the AirBNB concept is so much better.

With an AirBNB one rents the entire house, not just a single room. AirBNBs range from a single room (very, very rare) to dozens of rooms (rare, but more common than a single-room AirBNB.

I suppose the size of a typical AirBNB is four to seven rooms with capacity for eight to twenty-one folks. And in an urban area there will be more than several AirBNBs. So, next time you are hosting a family reunion, wedding, memorial service, or graduation, consider lining up one, two, three or as may AirBNBs as you might need. You will be rooming with your own family and your own friends, as opposed to who-knows-whom you will be sharing a hotel hallway if you book a wing of hotel rooms.

We just stayed in an AirBNB in Tucson, Arizona, the Wright House on 6th Avenue South. It was awesome. Five rooms. One to three people in each room. The wedding was held in the same house, and the reception was likewise held in the same house. Once we got there, no driving for 72 hours for this gala. And so much more ambience than a sterile Holiday Inn.

I don't know if AirBNB will be good investment but it will be fun to watch.

By the way, the only thing lacking at the AirBNB where we stayed in Tucson: no Keurig coffee machine in the downstairs kitchen / dining room area.

So, anonymously, I sent the hostess, Maja, a Keurig coffee machine. According to Amazon, it was delivered to the house on November 12, 2020. LOL. True story. Anonymously sent. She will love it. I included a note that suggested she market the Keurig as a free carton of coffee -- 72 K-cups -- any party that rents the AirBNB for two nights.

Wow, I love this technology. I posted the Keurig - AirBNB note about an hour or so ago.

The first piece of spam I get in my mailbox: 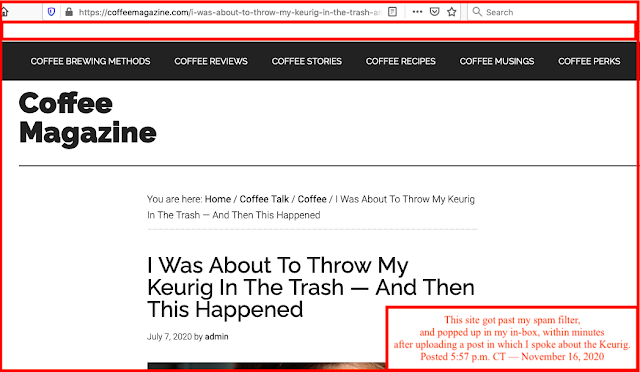 ****************
Good, bad, or indifferent, I have not received a targeted ad for Viagra in decades (?).  I would rather have targeted ads than randomly generated ads based on my gender, age, ethnicity. I would be getting a lot of ads for lefse grills. I don't need any more. I already have one.
By the way, that coffee ad above was perfect for me. I checked out Angelino's. They offer K-cups for 30 cents/cup. Starbucks is 83 cents/cup. Some well-known names offer K-cups for 29 cents each. It's easy to comparison shop on Amazon. All prices above were taken from the Amazon site. I always have Starbucks available because some guests expect Starbucks, but for me, I pay 29 cents/K-cup. Imagine -- less than 30 cents for a cup of coffee.
Posted by Bruce Oksol at 4:46 PM