February 20, 2018: oilprice.com talks about this also. And here we go again, Saudi Arabia is redefining "surplus" (as I noted below) and apparently getting ready to move the goal posts:


Other analysts have gone further. Citigroup and Goldman Sachs both estimate that the surplus has probably already been eliminated, meaning that the oil market has already reached the long-sought “balance” for which OPEC is aiming.

But as success draws near, oil prices are still not where OPEC wants them. The group is considering changing the way it measures “balance” in the market, for several reasons.

First, what constitutes the five-year average for inventories has changed significantly, with that period of time increasingly encompassing surplus years.

The level of inventories that was “average” for the period of 2011-2015 is substantially lower than the “average” for 2013-2017 — the latter period includes more than three years in which the market suffered from a glut.  [The "trillion-dollar-mistake" Saudi Arabia foisted on itself trying to break the US shale industry.]

In other words, the five-year average inventory level is a moving target, and because it has been rising quite a bit, bringing global inventories down to that threshold is not as impressive as it would be if using an older five-year period. [Exactly what I've been saying for quite some time.]

As a result, Saudi oil minister Khalid al-Falih suggested that OPEC would meet to discuss using a different metric. ["Move the goal posts.] One option would be to use the “forward demand cover,” Bloomberg reports, or the number of days that the current stock of inventories could supply the global market. This would arguably be a more accurate measurement because it would incorporate the fact that demand has climbed significantly in recent years.

Again, look at the range we're talking about -- it's pretty narrow -- between 60 and 65 days of inventory: 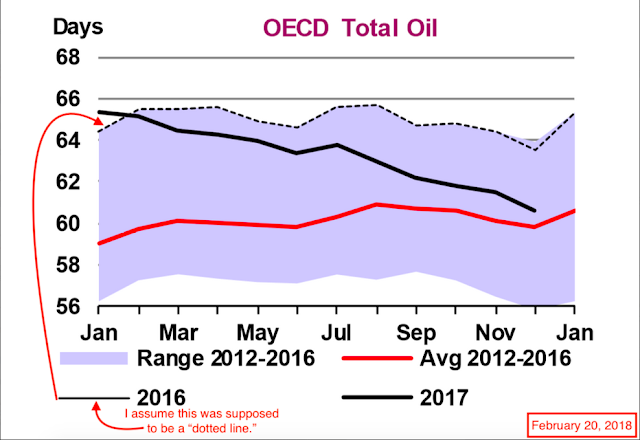 Disclaimer: in a long note like this there will be typographic and factual errors. I have not yet had the chance to double-check much of this. I often mis-read things. I often see things incorrectly. I often make simple arithmetic errors. I am inappropriately exuberant about the Bakken. I am inappropriately bullish when it comes to oil. If this is important to you, I would go to the source. Finally, the purpose of posting this is articulated in my welcome page/full disclaimer page, linked at the top of the blog. 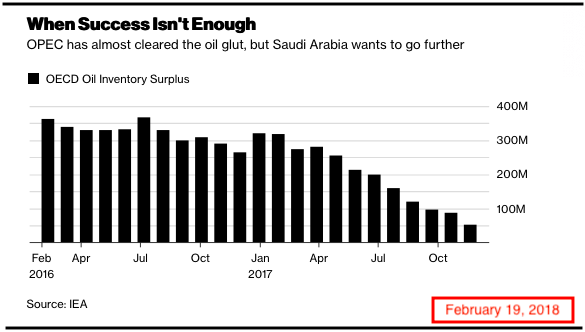 Yup, you guessed it. This is the first problem: the graph only shows the numerator. We don't have the denominator. All we have is the IEA telling us what that organization considers "surplus" or "glut." The denominator is the total amount of global oil sitting in storage. The graph doesn't provide that information, nor is there any other graph accompanying the article that provides that information. The x-axis is  from 0 to 400 million bbls. But does 400 million bbls represent 1% of total inventory or 10% or 50%? Does the 400 million bbls represent two days of global demand or ten days or fifty days. The graph tells me nothing except that the glut has dropped from 350 million bbls to 50 million bbls. But I still don't know how many days inventory the world has.

The second problem with the graph has already been intimated: it is simply the "surplus." But how is "surplus" defined?

But this is the most glaring problem with the chart. It only goes back to February 2016! Give me a break. That's two years and almost all of that time has been spent burning off the glut caused by the Saudi Surge, Saudi's "one-trillion-dollar mistake. They announced the surged in November, 2014; it really didn't star to take effect until March, 2015, and when the Saudis threw in the towel, announcing in November, 2016, they were going to cut back on production, it took until May, 2017, to really see the effect, and we still -- nine months later -- still have a surplus.

That graph is meaningless.

Fake news. Or rather, "incomplete data."

So, we will do the best with what we have.

From here on out, we're talking OECD inventories.

How much oil is currently in OECD inventories. About 3 billion bbls in round numbers (I'm sure you can find any number you want -- no matter what number you find, it's not very accurate. We've been through this before. But for our purposes, 3 billion bbls is good enough, in the graphic below, from this source:

Now, we have the numerator and the denominator.

100 million bbls / 3 billion bbls = 3%. I don't know about you, but for me 3% is practically a rounding error when the accuracy of the numerator and denominator are largely suspect. The law of large numbers probably helps us out.

I can't get my hands around big numbers. So when I come to stuff like this, I put in amounts I can understand. Let's say I was living on the margin and I only had $10 left in my pocket to get through the week. If I was lucky and found a dollar lying on the ground, I would have 10% more than I did a moment earlier. If I found only a quarter, I would have 2.5% more. Ten percent seems a lot more than 2.5% but in fact, my $11 isn't going to go much farther than $10.25.

So, that leads us to the next question. How far does 3 billion bbls (the total amount in OECD storage) take us?

Well, fortunately we have a graph for that. Not only that, but we have some projections from the EIA which I trust a whole lot more than the IEA (or OPEC or Saudi Arabia). Here's that graph. 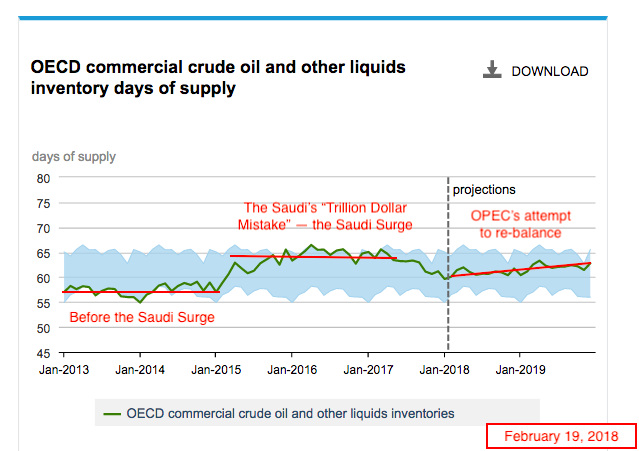 Note:
Finally, one more graph, saving the best to last. Look at the IEA graph again -- the "incomplete data" graph telling us there is only a 50-million-bbl inventory excess as of now.

Now look at this graph, from ycharts.com:

Holy baloney, Batman! For OPEC and the rest of the oil sector, the trend line is certainly going the right direction, but there's still a huge glut that needs to be burned off. What I find most interesting about this graph is that earlier we were talking about 3 billion bbls in OECD inventory, but this graph suggests as much as 4.5 billion bbls.

Again, this tells me no one really has a good handle on exactly how much crude oil there is in storage. There's a huge difference between 3 billion bbls and 4.5 billion bbls, especiall when the numerator is 50 million bbls. [I doubt all the crude oil in all the new pipelines across America has been tallied, just as one example.]

Lots of verbiage but the bottom line for me: the IEA graphic showing 60 days of supply is the most complete graphic and tends to be supported by the ycharts graph.

By the way, another interesting article from The Financial Times back on March 28, 2011: "OECD oil stocks data offer limited insight." Maybe the OECD data is better today than it was in 2011, but I have my doubts. It may be worse.
Posted by Bruce Oksol at 9:25 PM