RBN Energy: E&P profitability deteriorates despite higher oil prices, but what about 2018? 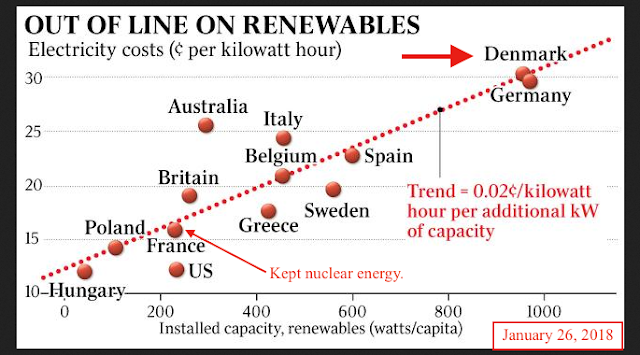 One year ago this was the "big news" for Denmark's energy sector:


Over at "the big stories," under US Energy Revolution, I update US LNG export stories.

UPI is reporting that the operator, Maersk Oil says it has not found an economic solution to continue production from the Tyra field. Wow.


Maersk Oil operates the Tyra natural gas field on behalf of a broader consortium that includes partnerships with energy majors like Royal Dutch Shell. Maersk said that, even after spending more than $140 million on reinforcing structures associated with production over the past 15 years, safety is becoming a clear factor.

The company said in a statement decommissioning of Tyra will proceed with the aim of ending production by October 2018. Starting next month, any resources now targeting reconstruction will go toward shutting the field down.

Today, GlobalData is reporting that Denmark had second thoughts. Denmark will not close Tyra field:

An agreement with the Danish government was approved by parliament and the final investment decision on the project was made by the Danish Underground Consortium (DUC) operated by Maersk Oil in December.

The project’s go ahead decision was influenced by the importance of Tyra as a hub in the Danish North Sea area, where the interruption of the production would have a significant negative impact in the country’s oil and gas production.

Faced with either redevelopment or early decommissioning, the Tyra fields present a level of expenditure not seen before in the Danish sector but the DUC and the Danish government are eager to execute the project.

The estimated remaining recoverable reserves of the fields under the 1/62 License contiguous area is nearly 900 million barrels of oil equivalent or 78 percent of total remaining reserves of Denmark.

If you need a link, here's one: http://www.maerskoil.com/media/press-releases/duc-partners-approve-the-largest-ever-danish-north-sea-investment.
Posted by Bruce Oksol at 6:06 AM