The highlights of the February, 2016, NDIC hearing dockets have been posted. We're starting to see a number of really huge spacing units at 5,120 acres, or eight (8) sections. I understand the need for overlapping units (to capture "orphan" oil along administrative spacing lines) but one could do that with 1280-spacing units, but that would be incredibly inefficient, so the more standard 2560-acre spacing units to solve the problem made all kinds of sense. I'm having trouble understanding why 5,120-acre spacing units are needed.

The other thing we're starting to see is an increased number of wells being placed in one spacing unit. This was expected and had the "Saudi surge/slump" not occurred, "we" would be much farther along in the manufacturing stage.

The northern two sections of the 2560-acre spacing unit: 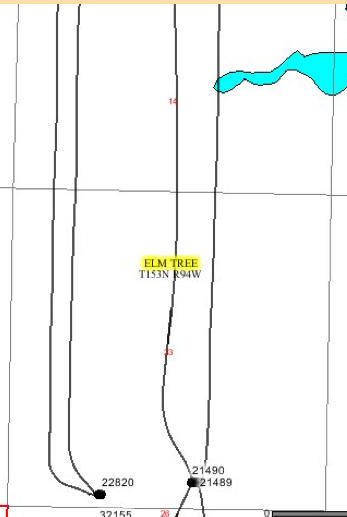 The southern two sections of the 2560-acre spacing unit, and, "no, I do not plan to correct the typographical error in the graphic below"): 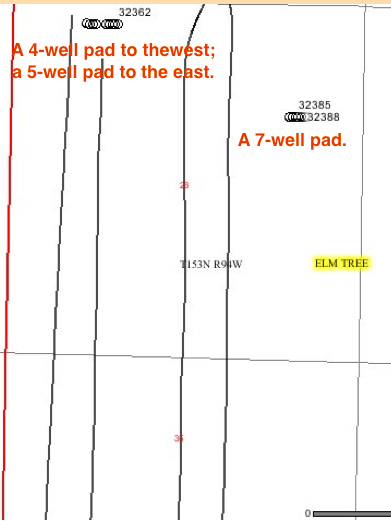 The wells will likely be long laterals, running through two sections. If so, there will be twenty-two new wells along the section line between sections 23 and 26, possibly with 12 of them north of the section line, and 10 of them below the section line, and CLR will probably drill them one at a time using one rig, sort of like they developed the Brooklyn oil field. Roughnecks can set up "home" for about two years drilling out these proposed 31 wells -- and that's why CLR can get accomplished with four (4) rigs when it used to take 20 rigs to get the same amount of work done: 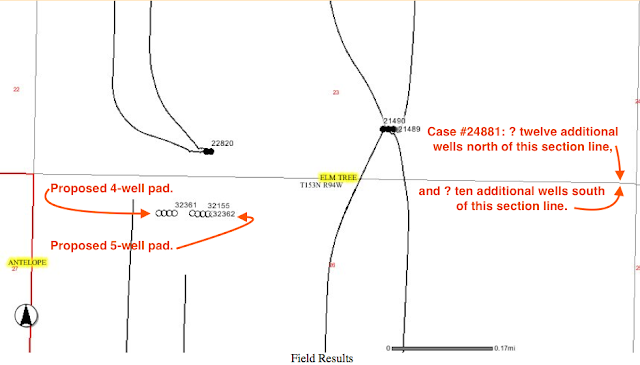 Back in early December, 2015, I highlighted a particularly active area in Elm Creek oil field.
Posted by Bruce Oksol at 6:18 AM