Commentary: price of oil -- since the 1970s, the rate of change in the price of oil is seldom  (almost never?) gradual one way or the other, and is almost completely unpredictable. Link here.

Perfect timing and in good company: yesterday I wrote --

In thirty-seven years of investing, I don't think I've ever been so excited to see earnings reports for 1Q21, and full year 2021 (we will have to wait quite awhile), and then the next several years after that, particularly E&P companies. I think one would have to go back to the years immediately after WWII to see something even remotely to what we're going to see over the next couple of years: coming out of a global lockdown, multiple stimulus bills, and then a multi-trillion-dollar infrastructure bill.

Today: Jamie Dimon said he's optimistic the pandemic will end with a US economic rebound; and the boom could easily run into 2023. Link here. 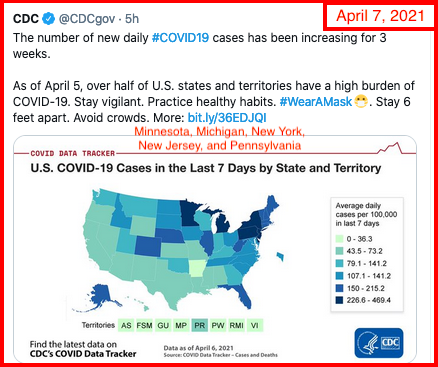 Perfect timing: yesterday a note about Neanderthals, Texas, and Covid-19 -- today this -- nearly half of all new virus infections are in just five states -- Texas -- called the Neanderthal state by the president is not one of them! Over at Yahoo!News:

The spike in cases has been especially pronounced in Michigan, where the seven-day average of daily new infections reached 6,719 cases Sunday — more than double what it was two weeks earlier. Only New York reported higher case numbers. And California and Texas, which have vastly larger populations than Michigan, are reporting less than half its number of daily infections.

Though Michigan has seen the highest rate of new infections in the past two weeks, Democratic Gov. Gretchen Whitmer has said she does not plan to tighten restrictions. She has blamed the virus surge on pandemic fatigue, which has people moving about more, as well as more contagious variants.

I wonder what her background in biology is?  There's a lot of "moving about" in California and Texas, and neither are on the five-state list.

Just one year ago, the onset of the COVID-19 pandemic plunged the energy industry’s exploration and production (E&P) sector — already reeling from a steep decline in oil prices in late 2019 — into a memorably brutal spring that threatened its survival. Demand cratered, price realizations fell to the lowest point in a decade, and cash flows dried up. Sure enough, E&P results for the first half of 2020 were a train wreck, with the three-dozen companies we track reporting a whopping $45 billion in losses, including impairments. But the dark clouds hovering over the industry began to clear in the second half of the year as the combination of production cutbacks and recovering demand triggered rising prices.  With the massive price-related impairments largely in the rear-view mirror, year-end 2020 results revealed that most E&Ps had clawed their way back to near-profitability. Today, we review their latest numbers and preview what we expect will be a sunny 2021 for the industry.