US economy on a tear: 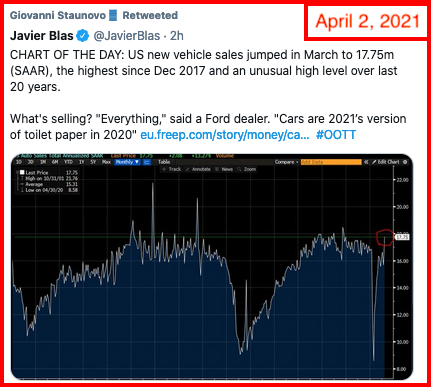 Semiconductors: huge US demand as US economy surges. What to do? The Taiwanese know! Link here. The big question: might TSMC look back twenty years from now and wish they had put new factories in a safe country like the US? Lots of talk about the Chinese and Taiwan relationship. Just saying. From the linked article:

Taiwan Semiconductor Manufacturing Co. , a major chip supplier to Apple Inc., said it would invest $100 billion over the next three years to increase production capacity as demand surges. The planned investment is a record for the world’s largest contract chip maker as well as the broader industry, analysts said, at a time when chips are in short supply around the world.

In a statement, the company said it expects strong demand over the next several years, a trend driven by growth in 5G and high computing capabilities and accelerated by the Covid-19 pandemic.

The pandemic accelerated 2020 - 2035 to 2020 - 2025, and fortunately the US has just the man in the White House to guide us through this high-velocity wind tunnel. Back to TSMC: $100 billion sounds like a lot of money but what's the denominator? What are they spending now? Here's the answer:

The $100 billion allocation for the next three years would be more than double what the company spent in the previous three years, according to New Street Research analyst Pierre Ferragu.

In January, TSMC announced a record capital-expenditure budget for 2021 of $25 billion to $28 billion to develop advanced chips and building plant capacity.

Now, who are the biggest customers? Automakers and Apple? I don't know. That's my first guess.