June 7, 2016: how big is the Indian energy story? Huge. The Wall Street Journal is reporting that a US company will be building six nuclear reactors in India.


The U.S. and India agreed to move forward with construction of six nuclear reactors in India by an American company, the first such move since the countries signed a landmark civil nuclear deal in 2008.

Under the agreement, Nuclear Power Corporation of India and Westinghouse Electric Co., a U.S. unit of Toshiba Corp., will begin engineering and site-design work for the reactors, though the final contract won’t be completed until June 2017, White House officials said. The deal marked a significant step in resolving obstacles to the sale of nuclear reactors and fuel to India.

Original Post
Summer has certainly started off with a bang. The market is showing some life, "oil" starts the day right at $50, and ... well, let's begin.

Yesterday, a reader alerted me to movement on the Dakota Access Pipeline in Iowa. Here's the link today from the Des Moines Register.

I started beating the drum on India some years ago, but the drumming has become increasingly louder over the past few days, much of it because of Al Troner's articles. Now, a headline story over at The Wall Street Journal -- 24 million new vehicles in India give oil prices a lift. Over at "The Big Stories" I have a link to "India: The New China" - first posted in April, 2016. That's how fast this story is moving.


“The big news in demand is growth in India, which now rivals China,” said Daniel Yergin, vice chairman of consulting firm IHS. “India really is seen as the growth market for oil.”

India is fueling a rapid economic expansion, with consumption hitting a record 4.35 million barrels of refined fuels a day during the first three months of the year, according to the International Energy Agency. That is up more than 10% from a year earlier and a big pickup from 2015’s pace.

CVX is making news over at Yahoo!Finance In-Play: Chevron extends solid early run near the upper end of its May trading range at around $103. Later, XOM began to move; XOM edged just slightly above its May peak at 90.46 to set a new 52-week high of $90.50. Later, near the end of the market day, it was noted that there were 198 issues that hit 52-week highs, and only 8 issues that hit 52-week lows. Some of those making 52-week highs today: Allete (again, at least 3rd day in a row); Black Hills (again); CenterPoint Energy (again); XOM (wow); ONEOK (again); QEP (again); Raytheon (again); TransCanada; and, UnitedHealth Group.

Perhaps the biggest news of the day: atmospheric CO2 barely budged month-over-month. It was "407.57" in April. For May, it hardly moved: 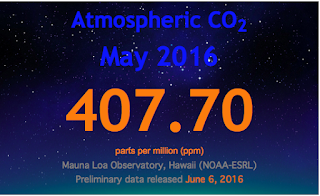 I can never get my hands around big numbers, but "407.70" is "parts per million." So if I gave Sophia one million dollars and asked for $407 back, she might not give it to me, but she would hardly notice.  From April to May, at a time when fossil fuel use is surging, atmospheric CO2, using the same million-dollar analogy, rose .... drum roll ... 13 cents over a million-dollar denominator.

As the Democratic presumptive nominee would say: what does it matter?


Operators in the Permian added five rigs to their active count during the week, in the latest demonstration that the basin is perhaps the most viable across the shale patch, with its low production costs and abundant reserves.

The Permian is enjoying a lot of attention from the energy industry and from private equity alike. Those with a presence in the basin are upbeat about the future, and those without are trying to step into it in order to share in the riches.