Later, 2:38 p.m. CT: a reader provides a bit of insight regarding the fact that "all" new Zavanna wells coming off the confidential list are going to DRL status. First, re-read this post from last fall: a new Zavanna natural gas processing plant seven miles northeast of Williston. Second, the reader sent me a scanned copy of a letter from Zavanna suggesting that Zavanna plans to frack a number of wells in Stockyard Creek (one of the best spots in the Bakken). These data points suggest to me that Zavanna is taking the new NDIC flaring rules seriously and is doing what it can to meet the requirements. The natural gas processing plant is near Springbrook, North Dakota, about 7 miles northeast of Williston; the website link is here. I don't know where the plant is located but most likely somewhere along County Highway 6 east of US Highway 85, north of Williston. Google maps indicate a lot of activity in this area. Be sure to note that the Flatirons site mentions "gas lift" -- be sure to check that out at wiki if you are unfamiliar with gas lift.

This is just idle chatter; no statistical analysis. It's just my impression, and my impression could be way off. Don't make any decisions based on my impressions; if this information is important to you, go to the source.

Reminder: this is not an investment site. Do not make any investment or financial decisions based on anything you read here or think you may have read here.

I think there was a story over the weekend, which I did not post, suggesting that oil production from Texas was steady or increasing despite laying down of rigs. Today, from Yahoo!In-Play:

On refining and light tight oil:

And another blurb from the EIA today:

A fairly useless statistic. And it's more than a year old; it's 2013 data. Auto manufacturers get their monthly sales data out the first day of the next month. There's trivia, and then there's EIA trivia.

This one caught me by surprise -- at least until I got into the article. The WSJ is reporting that low oil prices may curb domestic demand. Yes, it will take a fairly long article to explain that one.

This is an old, old story for long-time readers, but I'm not sure if newbies are aware of this issue: the Mideast consumes a lot of their own oil; they are consuming more; local consumption puts exports at risk.


The sharp drop in oil prices hasn’t been kind to the world’s petro-states, but it has provided an opening to address one of their most pressing economic problems: runaway domestic energy demand.

In the Middle East, the growth in demand is driven in part by expanding populations, as well as a deliberate move into energy-intensive industries such as aluminum and petrochemical production. But a big part stems from the region’s ubiquitous energy subsidies.

Voracious energy use in countries such as Saudi Arabia and Iran is threatening exports from the most oil-rich region in the world. Failing to restrain this galloping demand could leave global markets more volatile, pressure domestic budgets and eventually nudge prices back up.

As a group, OPEC members—mostly countries in the Middle East and Africa, plus Venezuela and Ecuador—now consume almost as much energy as China, with less than half its population. The Middle East, especially, is expected to account for a major chunk of future global demand growth. Saudi energy use is expected to grow at a 3.8% rate through 2020, according to the International Energy Agency. That’s slower than the country’s 5.7% annual average over the past six years, but well above the expected global average of 1.2%.

Consumption is “out of control,” said Steve Griffiths, an executive director at the Masdar Institute, an energy think tank in Abu Dhabi.

Nearly every country in the Middle East long ago embraced the notion that cheap fuel was essentially a birthright. As a result, energy is all but free in some places, such as Saudi Arabia, where a gallon of gasoline costs 45 cents. Governments pick up the rest of the tab, either paying for imports or forgoing income that could be earned by exporting domestic oil or gas rather than selling it for rock-bottom prices at home.

Most countries have realized that’s not sustainable. Some countries, such as Iran, Nigeria and Venezuela, have already hit that wall: They are unable to maintain their spending on imports to meet demand or balance their budgets without the export revenue they are forgoing to satiate consumers’ growing energy appetite. Iran has made some halting progress in raising prices closer to market levels; Nigeria and Venezuela haven’t.

Much more at the link. This graphic is from the linked article above: 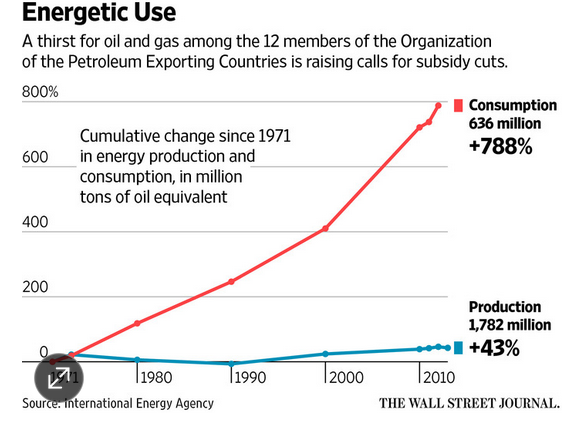 Last week the Greek prime minister was in France to visit the IMF. This week he travels to Moscow.

It's all for show. Russia has no money. The Greeks even said that -- it's not for money; it's for show.

From the print edition:

Instead, they said the visit is aimed at pleasing Greek voters with a show of defiance toward European creditors.

I've Been Everywhere, Johnny Cash
Posted by Bruce Oksol at 8:34 AM