Later, 10:13 a.m. CDT: the EIA weekly petroleum report has been released. Let's see if we can "guess" the critical number based on movement in the price of WTI? WTI, now: surges, up 2.5%; trading at $71; my hunch -- the EIA data corroborates the API data --

The data:
I think this metric was off everyone's radar for the past year. I certainly don't recall many mainstream business articles on global jet fuel demand. Peak oil demand in five years? Gonna be fun watching them build flying EVs that carry 500 passengers from Dubai to London. Just saying.

See also this story from Reuters: US crude oil stockpiles fall more than expected to below 400 million bbls.

For newbies: I followed the "EIA weekly crude oil inventories" for one full year until a) I got bored; and, b) I got a feeling for it. This is my 30-second elevator speech: US crude oil inventories historically fluctuated around 350 million bbls. During the  Saudi Surge -- their trillion-dollar mistake -- US crude oil inventories surged to 450 million bbls or higher -- I forget the number -- I don't know if it got to 470 million bbls but it seems it might have. Whatever. US shale oil companies were struggling; many thought the Saudis would end the US shale revolution. They did not, but they might have come closer than folks give them credit. Had their foreign reserves not plummeted the Saudis might have hung in there and the story might have ended differently. Be that as it may, Saudi Arabia, OPEC, Russia, US shale operators were desperate to get the price of oil up, but that would only happen if the global inventories in storage were drawn down. Wow, it took a long time. I did not think they could do it. I suggested that the "350-million-bbl threshold" was now "400-million-bbls" to reflect the new world order/the new economy/the expanding economy/etc.

It helped that Libya continued to remain being Libya -- one step forward, three steps back; that Venezuela imploded; that Trump restored the original sanctions on Iran (you know, the ones Obama lifted after the entire world reluctantly agreed to his harsh sanctions in the first place); that Canadian oil remains landlocked and Trudeau can't close a deal or build a pipeline (in fact, he famously killed the predecessor to the Trans Mountain, the Enbridge Northern Gateway.

The gasoline demand graphic has been posted.

The "NG fill rate" will be released tomorrow. 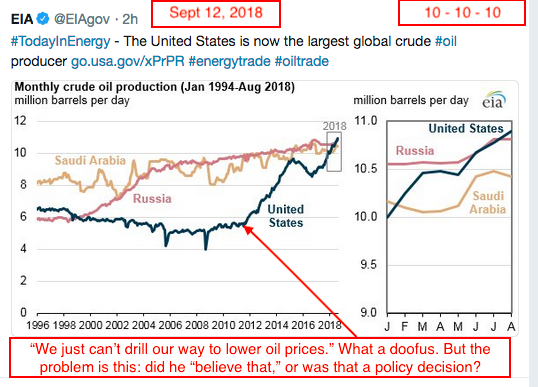 
The late-August decision by Canada’s Federal Court of Appeal to overturn the Canadian government’s approval of the Trans Mountain Expansion Project will delay the project’s completion to at least 2021 or 2022. And — who knows? — the unanimous ruling may ultimately lead to TMX’s undoing, despite the Canadian government’s acquisition of the existing Trans Mountain Pipeline and the expansion project and its commitment to get TMX built. As producers in the Western Canadian Sedimentary Basin (WCSB) know all too well, TMX’s 590 Mb/d of incremental pipeline capacity would help to resolve ever-worsening pipeline takeaway constraints out of the Alberta oil sands and other production areas in the WCSB. These constraints are having a major economic impact every day — as evidenced by price differentials wide enough to run a locomotive through. Speaking of trains, crude-by-rail exports out of Western Canada reached a record 205 Mb/d in June, an 86% increase from the same month last year, and with WCSB production rising as new oil sands capacity comes online and with only limited relief likely on the pipeline capacity front from the Enbridge Line 3 Replacement Project in late 2019, many producers will need to depend on rail shipments of crude well into the 2020s. Today, we discuss the recent court ruling and what it means for Western Canadian producers, price spreads and the future of crude-by-rail.

We didn’t expect to revisit the related issues of Western Canadian differentials and crude-by-rail so soon - we provided an update just a few weeks ago, in Revival. But the Federal Court of Appeal’s’ 3-0 ruling on August 30 was a major blow to the TMX project, which producers have been hoping would increase pipeline takeaway capacity out of the WCSB and allow them to significantly expand sales to markets in the Pacific Rim.

Two years ago (or thereabouts) I did not renew my subscription to The New Yorker. The pro-Hillary / anti-Trump finally got to me. I still read it -- or page through it -- every week at the library. The editor(s) still suffer from Trump Derangement Syndrome.

A few months ago I received my last issue of The New York Review of Books. For the same reason.

My dilemma: The London Review of Books. Just when I think I'm ready to give up on it, an incredibly good issue is produced. I hadn't received a copy of TLROB in several weeks -- I thought the subscription had expired, but today there it was in my mailbox.

Wow, maybe sixteen essays and twelve of them seem to be "must-read" articles. This is like watching championship golf in which the leader has ten birdies and an eagle going into the final three holes.


JD Vance begins Hillbilly Elegy, his memoir of growing up poor in the American Midwest, with a confession:

"I'll be the first to admit that I've accomplished nothing great in my life, certainly nothing that would justify a complete stranger paying money to read about it ... I wrote this book because I've achieved something quite ordinary, which doesn't happen to most kids who grow up like me."

Vance was raised in a "hillbilly" family.

According to Vance, hillbillies have a lot to recommend them -- they're patriotic, loyal, family-oriented, 'the toughest goddamned people on this earth' -- but they're also pessimistic, isolated, suspicious of outsiders, and, these days, prone to drug abuse and despair.

A kid 'with a grim future,' Vance could have easily ended up dead of an opioid overdose; instead he graduated from Yale Law School, the 'coolest thing I've done."

He attributes his success to old-fashioned self-discipline, which he learned at the feet of his grandmother, Mamaw, and perfected in the marines.

Unlike those in his hometown who had kids young, or who were worn down by menial jobs, he fulfilled what he calls the American Dream. By the end of the book, he has a house, a happy marriage, two dogs, a job at a venture capital firm -- and distance from his humble origins.

I can hardly wait to read more.

In the essay, Maggie Doherty reviews seven books, including, Kids These Days: Human Capital and the Making of Millennials, Malcolm Harris, c 2018.