Using its high-intensity design, EOG drilled and completed a well—Riverview #102-32H—in its Antelope field area that produced 200,000 barrels of oil in its first 91 days for an average daily production total of roughly 2,200 bopd.

Although the well is still on confidential status, Thomas said the well’s results are “definitely repeatable.” The horizontal was drilled at only 4,600 feet, only half of the typical length for most Williston Basin wells.

According to Thomas, the new approach generates 8 to 10 times the number of fractures within 1,000 feet when compared to the old method. Containing fracture events closer to the wellbore is crucial for EOG.

EOG now works to keep fractures within 200 to 300 feet of the well bore.

“It allows us to downspace and drill wells closer and closer together,” he said. In addition to wellbore proximity for fractures, the drilling teams are working to keep the bit within a 20 to 30 foot window instead of the traditionally accepted 100 to 150 foot drilling window.


From a sundry form: EOG is selling this crude oil to Shell Trading (US) Company at the lease. Shell will use Prairie Field Service as the crude transporter. Effective October 1, 2015.

From a sundry form: EOG is selling this crude oil to Enterprise at the lease. Enterprise will use Big Lease Trucking to transport the crude. Effective November 1, 2015.

There was vegetation fire in the area; well was shut in during a few days in August, 2015.

From a sundry form: "In order to increase frac volumes, EOG respectfully requests authorization to increase the hole size and lay 5 1/2" liner as described in the Preferred Option.

September 21, 2015: the other well on the 2-well pad with #30286:
September 18, 2015: I'm going to quit blogging! I have seen something so incredible, I cannot even get my hands around it as they say. This is so incredible. I thought I was overly exuberant about the Bakken, but I have been overly conservative. A reader brought this to my attention. This well is still on confidential status but look at the production in the first full month (for newbies, a well that produced 50,000 bbls in the first year back in 2007 was considered a good Bakken well. This well produced almost 100,000 bbls in the first month -- okay, a little hyperbole but 87,531 bbls of oil in the first full month of production.

Note: this was a short lateral. I don't agree completely, but some folks feel that, all things being equal, a long lateral (two sections) should double the production of a short lateral (one section), which this one was. If so, this would have produced in excess of 150,000 bbls the first full month.

But I'm kidding. I will keep blogging. But it seems I've been way too conservative in my estimates of what the Bakken can do. I hope the roughnecks and frackers were rewarded for this incredible well. The well is still on confidential list so we don't know the completion history.

Also at Bakken Magazine.com: EOG calls this their best well to date.

From the NDIC file, the scout ticket: 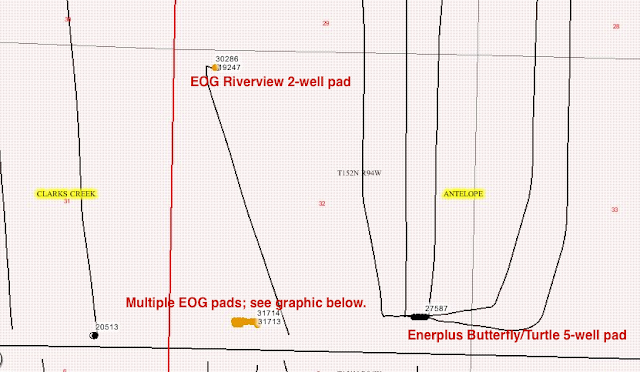 See this post for the Enerplus Monarch well on Enerplus' butterfly/turtle 5-well pad above, in the southeast corner of section 32:

While we're on this page, let's look at the legal names of the EOG wells in the southwest quadrant. The important data point in the legal name is in bold, red (these wells are on confidential; the running directions are assumptioins based on the legal name, and could be wrong):