My Thoughts Exactly: The Build Was Unexpected, And Other Thoughts; Say What You Want: I Dare You To Find Any Data Points That Reflect US Economy Better Than These Two Data Points -- February 18, 2016

Stocks have risen nearly 22 million barrels over the last six reporting periods, pushing inventories into record-high territory. At 504.105 million barrels, crude stocks sit 36.3% above the five-year average for this time of year.

Crude runs increased 338,000 b/d to 15.848 million b/d, helping offset the size of last week's build. It was the first time the amount of crude processed by refiners rose on a week-on-week basis since late December, raising the possibility that facilities have returned from performing seasonal maintenance.

On the U.S. Gulf Coast, home to more than half of U.S. operable crude distillation capacity, refinery utilization increased 3.1 percentage points to 87.8%.

This is quite incredible. There had been expectations that the global crude oil glut could be "burned off" within this calendar year and things would turn a bit "better" by the end of the year. This has to be particularly bad news for everyone but perhaps Saudi Arabia has to be most concerned.

Venezuela would be concerned but that country appears to be as bad off as Puerto Rico, if not worse. And, Puerto Rico has no oil.

I still think this is the most important data point for tracking health of the US economy: 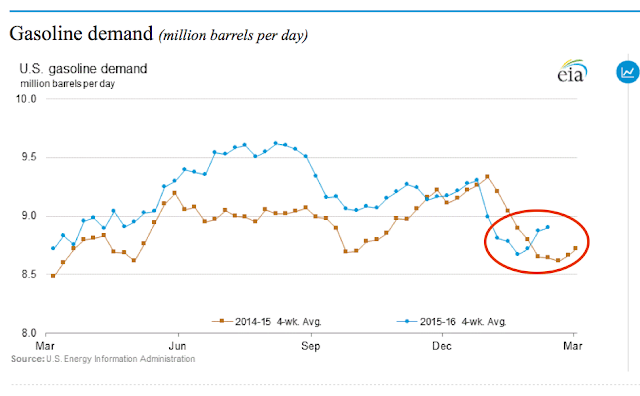 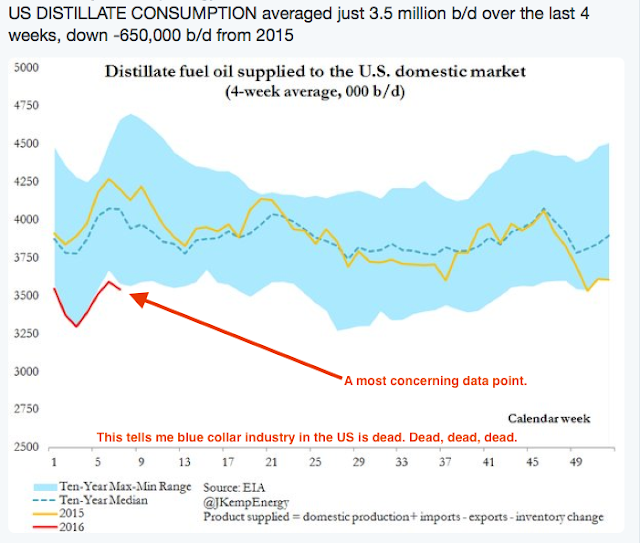 Perhaps there won't be a recession in the US within the next year, but those folks who work in the world of diesel fuel are already in a recession, if not a depression. The third most important data point to reflect the health of the US economy might be the sales of cheap beer.

I am surprised that we haven't seen any reports that Zika may be related to global warming. My hunch: just a matter of time.


The global public health emergency involving deformed babies emerged in 2015, the hottest year in the historical record, with an outbreak in Brazil of a disease transmitted by heat-loving mosquitoes. Can that be a coincidence?

Scientists say it will take them years to figure that out, and pointed to other factors that may have played a larger role in starting the crisis. But these same experts added that the Zika epidemic, as well as the related spread of a disease called dengue that is sickening as many as 100 million people a year and killing thousands, should be interpreted as warnings.

Over the coming decades, global warming is likely to increase the range and speed the life cycle of the particular mosquitoes carrying these viruses, encouraging their spread deeper into temperate countries like the United States.]

Right Side
Left Side