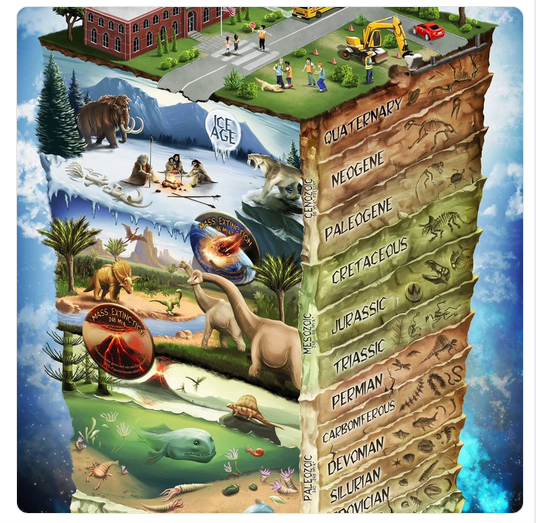 Corresponding to eons, eras, periods, epochs and ages, the terms "eonothem", "erathem", "system", "series", "stage" are used to refer to the layers of rock that belong to these stretches of geologic time in Earth's history.

Geologists qualify these units as "early", "mid", and "late" when referring to time, and "lower", "middle", and "upper" when referring to the corresponding rocks. For example, the Lower Jurassic Series in chronostratigraphy corresponds to the Early Jurassic Epoch in geochronology. The adjectives are capitalized when the subdivision is formally recognized, and lower case when not; thus "early Miocene" but "Early Jurassic."


Nothing to do with the Bakken. Link here.

Geologist's summary of the Ordovician Black Island formation, a PDF, undated, but sources include a 2010 reference.  This is a dry gas formation, found only in North Dakota and Saskatchewan, and producing only from vertical wells to date:


The total cumulative oil production from these 18 wells is little more than 200,000 barrels. The cumulative gas production, however, is over 115 BCF of dry gas (Table 1). Converting the gas to barrels of oil equivalent (BOE), assuming 5,620 cubic feet of dry gas (methane) equals 1 barrel of oil, over 17 million BOE have been produced from wells that have completed and produced from the Black Island Formation, while the water production total is ~450,000 barrels. Overall, the average Black Island well has cumulatively produced 960,463 BOE with only 24,960 barrels of water. Even after 15+ years of production, Black Island completions produce very little water.

See also this blog post on the Ordovician (Winnepeg Group).

Consulting geologist's evaluation of the Red River, 2011, a PDF.

Monograph on oil potential in eastern North Dakota, 1963, but remains relevant, a PDF.

Williston Basin Geology with an emphasis on the Bakken Pool.

The "Bakken Pool" is an administrative term that includes the Bakken formation and the Three Forks formations. In some areas, the Three Forks is referred to as the Three Forks Sanish. The Pronghorn Sand(s) was first talked about around 2011, delineated by Whiting, and in southwest North Dakota.

During the "Bakken boom," there seems to be confusion with "Three Forks Sanish." Early on, that was how it was referred to: the "Three Forks Sanish." Over time, the "Sanish" was dropped, and it was simply "Three Forks." But on file reports, especially Whiting file reports, one sees "Sanish" standing alone. According to the "Petroleum Geology of North Dakota's Williston Basin (linked above also), "Sanish" was another name for the Bakken formation (Table 1, 1977).  Further down in the article, it states that the Three Forks overlies the Birdbear formation; and, in turn, the Three Forks overlies the Bakken. (So, there is still a bit of confusion between the geologists and the NDIC administrative nomenclature.)  According to the report at the link, the "Sanish" is an "informal unit," Sanish sandstone which overlies the Sanish itself.

The Bakken is a "world class source rock." Click here for a comprehensive 2007 study/report of this source rock.

How and where the "sweet spot" of the Bakken was formed.

A collection of articles / internet sources on the Bakken / Three Forks.

Early review of the Bakken (PDF), undated, probably published about 1993; geologic review up to that time

The Pronghorn Member of The Bakken Formation

I have posted this several times: there is confusion over "Bakken" vs "Three Forks Sanish." This is the best answer I have seen: the NDIC and the USGS consider the oil coming from the "Bakken" and the "Three Forks Sanish" to be coming from the "Bakken Pool." That's why on the daily activity report, the pool is always listed as "Bakken" when the well targets the Bakken formation or the TFS formation.

And that's the key: "formation." The Bakken formation is composed of the Upper, Middle, and Lower Bakken members/units, all separate strata. Likewise, the Upper TFS and the Lower TFS are separate strata.

On the other hand, "Bakken Pool" is an administrative term. The USGS and the NDIC prefer to lump these five (5) formations together as one pool (see below -- it makes sense).

The five formations can be very, very thin in some areas, and it is very possible a) the geologist is not 100% sure which formation the tip of the drill is in; b) a long lateral may pierce more than one formation; and/or, c) the administrative paperwork to date may not always be "perfect," and it might be difficult, expensive, and even unnecessary to sort out exactly what formation the lateral is in, especially when the formations may communicate in some localities.

Source rock: source rocks are not necessarily reservoir rocks. It is where oil and gas are generated.

Reservoir rock: rock that is more like a sponge. It has a lot of interconnected holes.

Why oil and not gas? "Most of the deposited hydrocarbon rock around the world is gas-bearing rather than oil-bearing. It takes significantly more pressure and temperature to turn oil into gas, and in the Bakken in North Dakota it is not deep enough to produce as much gas. Other formations around the world are around 14,000 to 18,000 feet; the Bakken is only 10,000 feet the Williston Basin, so it is still in what they call the oil window." -- Julie Lefever, source linked below, paraphrased short phrases. If I paraphrased her correctly she talked about pressure necessary to produce gas, and yet the Niobrara formation produces gas and it is very, very shallow, 1,000 to 2,000 feet.

Is the Bakken unique? "The thing that makes the Bakken unique and has been of interest for study academically as well as by oil companies is that it can have as much as 30 percent organize material, which is what changes into and creates the oil. We have three layers to the Bakken: a lower member, which is high in organics; a middle member....a little bit of organics but it's really not considered a source rock; and, then an upper shale, which again isn't very thick generally. The upper shale was the target during the late 80s; early 90s, the original horizontal play. But it's also high in organics, up to 30 percent in organic material. That's really rich for what they call a source rock, something that can generate oil, termed a world-class source rock." -- Julie Lefever, source linked below.

The stratigraphic nomenclature varies, for example:

South Dakota
Stratigraphic map
*****
Of course, the next question that arises is this: at the NDIC website, cumulative oil production is broken down by "formation" on one of the pages. The NDIC has broken out two "formations" as 1) the Bakken; and 2) the Bakken/TFS.  It appears for North Dakota this is logical: as noted above, the "Bakken Pool" group is composed of the Bakken formation and the Three Forks Formation. But it is confusing that they label it as the "Bakken/TFS." They don't do that with other formations, such as the Red River which is part of the Madison Group.

Excellent lecture, Q & A by Julie Lefever, undated, cluttered with ads, but still a very good original source. She references 20 rigs in North Dakota so this much have been before 2007.  She references some early work by EOG in the Parshall area.

Here's another recent discussion regarding this issue; the discussion begins well down into the thread once you get there.

So, there you have it. Within the "Bakken," it sounds like there could be five formations: Upper, Middle, and Lower Bakken; and, the Upper and Lower Three Forks Sanish (more correctly referred to as unit 1- 6).