82a. What do you mean by Bakken 2.0? See this post. Important data points:

Example: I was trying to find a website that I had discovered some nights ago, but was unable to find it. Then I recalled that I likely linked it somewhere on the Bakken blog. It turns out I had, and I found the site I was looking for.

I am living in an insulated world: I live in an apartment complex in a somewhat upper middle-class neighborhood where the emphasis is clearly on good education opportunities for toddlers through high school. I am not affected directly by any of the current events in Seattle, Minneapolis, etc. I further insulate myself by not watching the news, and surfing only that part of the internet that I am interested in following. Likewise, I don't subscribe to any mainstream newspapers or magazines. I subscribe to periodicals like the New York Review of Books and The London Review of Books, very clearly with an editorial slant different than my own, but I enjoy good writing. I can pick and choose the essays to read.

So, having said all that, I have no dog in that fight in Seattle or Minneapolis. I am strictly a spectator. I actually think that CHAZ is somewhat comical if it weren't so serious. I think it will have profound effects on what it means to be an "urban" center in the United States these days. I see autonomous zones in Seattle and, perhaps Minneapolis, and perhaps even Portland, as "one-offs." I can't imagine Chicago, NYC, or even San Francisco allowing this to happen.

I think most sane Americans were initially outraged by what as happening in Seattle and Minneapolis (if they were paying attention) but now have this attitude: fine, if the city of Seattle wants to cede the downtown area to a motley crew, then let Seattle do it. It will be a wake-up call to the rest of the country. If more autonomous zones sprout, at least city councils can't say they weren't warned.

It will be interesting to see how Seattle city council sorts this one out.

For me, and most Americans, I suppose, we have so many more diversions that if this is how the members of Seattle city council want to spend their days and nights, that's fine with me, grappling with a bunch of self-centered malcontents. I'm going to enjoy music, reading, travel, grandchildren, -- I guess the pursuit of happiness and watching out for the grandchildren.

Books. These should download as PDFs on your desktop.

EIA: trends in costs, March, 2016: EIA white paper on trends in US oil and natural gas upstream costs, published in March, 2016, might be of interest. The link will take you to a 141-page PDF. Here is the link itself: https://www.eia.gov/analysis/studies/drilling/pdf/upstream.pdf.

[Note: my goal is to post not less than five new posts each day as well as update as many as ten old posts. When reading today's most recent posting, be sure to scroll down to see all postings for that day. Readers should assume data is only as current as of the date originally posted, but updates are often provided, and production data is updated on old posts when I find them.]


This is NOT an investment site. Do not use this site to make investment decisions.

This site is entirely about the oil industry in North Dakota (with occasional political commentary). There is an oil boom going on in the state of North Dakota. It started about 2004 following incredible results in eastern Montana in 2000.

My only agenda with regard to this site is education.  The original intent was not to include news about investing and investments, but that is absolutely impossible to do when talking for an extended period of time on the oil industry. So, over time, the site has morphed to include thoughts on investments not only in the Bakken but all oil-producing formations in the Williston Basin. Right now it's subtitled "All Bakken All The Time" but it's very likely that may have to change over time as more formations become more exciting.

I generally post anywhere from three to five stand-alone postings each day, so it is important to scroll down to check out all the news for the day. I also update another five to ten (sometimes more) articles linked on the sidebar at the right or at one of the pages tabbed at the top. 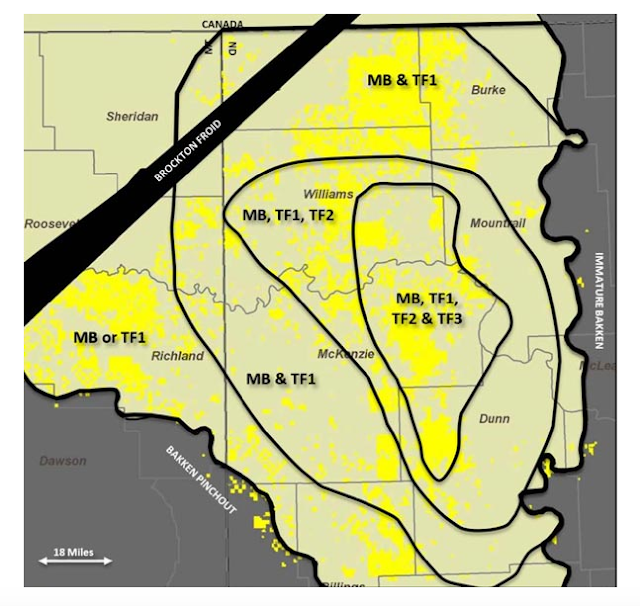 
Update on the Tyler and the Pronghorn Sand. Link here for two in-depth articles, July, 2017.

Goldman Sachs on the transformation of the oil industry, "lower for longer," 2017.

US tight oil production up against its limits, Hart Energy/EnergyPost -- May 16, 2016; archived here;

An upbeat assessment of the Bakken / Eagle Ford during a horrendous slump in oil prices, May 19, 2015.

Bakken regains position as largest shale play in the US, EIA, December 6, 2014

Perhaps the best and most recent up to this point (2013). Google: Geologic assessment of technically recoverable oil in the Devonian; the first hit should provide a link to a PDF.

Is the Bakken over-hyped?

Overview of the Petroleum Geology of The North Dakota Williston Basin, Heck, LeFever, Fischer, LeFever, undated, probably 2000; data up through 1999

UND, Julie LeFever, the Bakken/TFS, May, 2010 (no longer available at that source); possibly an alternate here (PDF for 2010 TFS assessment; when you get to this link, download it; your computer may automatically "unzip" it; if it does, scroll to the pdf)

Video of drilling and fracturing, March, 2010.

The main purpose of this site is educational. Over time, investment analysis has increased (see above). This site is an attempt to provide information about "the Bakken" and to direct folks to the news stories coming out of the North Dakota oil industry. It is very, very superficial in scope. I probably understand about 1 percent of all that goes on in the industry (if that much). I have a poor memory and often make simple mistakes, but will correct them when I become aware of them. I find myself making more typographical errors as the years go by.

I grew up in Williston, in the heart of the Williston Oil Basin (WOB) and have followed the oil industry my entire life, in a very general way. I invest in publicly traded companies through the stock market, but my investments in WOB are trivial compared to my overall investment portfolio. I own no mineral rights, and have no inside information regarding the WOB. I do talk with people who live there and occasionally receive information second- and third-hand. I do not subscribe to any newsletters. I began subscribing to the NDIC basic subscription service in late 2010.

I enjoy following the activity in the WOB, but am not sure that investing in the oil companies in the WOB is the best way to go; there are many other opportunities in the stock market that might be better. At the current time, of the  Williston Oil Basin-related companies, I am invested in the following, as well as others: BR (COP), CLR, ENB, EEP, and SLB. (I am currently not holding shares in MDU, one of my favorite long-term holdings. I no longer have shares in my favorite company, BNI, because Warren Buffet bought it in 2010. I sold all my NOG during the "bear raid" of 2011.) I trade in and out of these companies with others in the WOB. I would never recommend any companies because  everyone's investment styles are different. I am often accused of being too exuberant about the WOB, and I admit it. I find the oil activity in North Dakota very interesting. It's easy to be negative about things in life, so I tend to over-compensate in some areas by being too optimistic when it comes to the oil industry.

I am definitely a novice at all this, so if something I say doesn't seem correct, it may not be. There are many ways on the web to cross-check "facts."
The largest continuous oil reservoir in the continental United States.
Additional Information

This site should not be used to make investment decisions, although it may be one of several data points to lead you in certain directions. Much of what I write can look factual, when in fact it is opinion or my general understanding of the issue. Over time, I assume this site will evolve, based on reader feedback. As expected, it was hard not to have op-ed pieces, and some have already been added.

About the site's name. The friends of my "old" Million Dollar Way blog know that the name of the site has nothing to do with money -- at least not directly in terms of me or investing. When I was growing up, the road leading out of Williston was known as the "Million Dollar Way" because of the automobile dealerships and businesses related to the oil industry.


Lorin is the only son of Henry O. Bakken. The Bakken formation — the pool of oil that lies beneath western North Dakota, northeast Montana and part of Canada — is named for the well drilled in 1951 and 1952 on the Henry O. Bakken farm northeast of Tioga.

While Lorin Bakken, 59, says he feels honored, he avoids the attention he could easily draw to himself. He still lives in Tioga, but he keeps such a low profile that many people don’t know he’s connected to the Bakken boom.

He lives in a modest house, doesn’t own a car and hasn’t worked since he stopped working on his family’s farm in 1992. He primarily keeps to himself, although he regularly attends Zion Lutheran Church, eats lunch twice a week at the senior center and does errands in downtown Tioga.

Lorin said he was private before his name became famous, and he hasn’t changed.


Climate change in the West North Central Region, ND-SD-MT-WY, a PDF file. It's fairly long and will take a moment to download.


Undated, But References the 2008 Oil Boom and Record Low Unemployment

On January 14, 2013, I received this comment: "Of all the Bakken blogs yours is the most political." I did not know if that was a compliment or a complaint. Of course, it is not true. To the best of my knowledge, the "Bakken blog" that is most political is Teegue's water cooler. The last post for the water cooler was dated August 24, 2012.

Actually, I don't know if the water cooler discussion group is moderated by "Teegue," but it is an offshoot of the Bakken Shale Discussion Group which allows no political discussion whatsoever. More than one infraction and you will be kicked out of the discussion group. Teegue is also on record that no one is to mention the "Million Dollar Way" blogspot on his discussion group.

But the comment about the Million Dollar Way being the most political of all Bakken blogs gave me an opportunity to google "Bakken blogs." And this is what showed up at 9:00 p.m. EST, January 14, 2013:

#1: Bakken Blog: "oil patch coverage since 2007." It started out as a blog about Mountrail County only but has since expanded to include the entire Bakken and Three Forks oil play.  Without other sites about the energy industry, this blog's information provides no perspective on what is going on elsewhere.

#6: Mineral Rights Forum: the name says it all, and is probably the best forum for mineral rights owners anywhere in the states.

#11:  True Conservatives on Twitter. I can't make this stuff up. That would be all political.

#13: The Bakken: the posts are undated. General information. Tell me if you prefer it to any other blog on the Bakken. Probably not.

#15: Drilling. The blog covers many plays. The last Bakken-related post was dated November 16, 2012.

#18: Teegue's Bakken Shale Discussion Group, linked above. It used to be one of the best forums for Bakken oil discussion. When googling "Bakken blog" it now pops up #18.

#19: another repeat of one of the above