A Random Update Of the CLR Hartman Wells In Chimney Butte -- March 5, 2015

July 8, 2018: production data as been updated; the graphic of this area has not changed.


There hasn't been much news about benches 2 and 3 lately. Note that Hartman wells in Dunn county as part of a density test by CLR where they placed 6 new wells next to 2 existing wells. The two 3rd bench wells represent the last time I looked: a total bust with one and the second 3rd bench well was the most productive of the 6 new wells with the other. Go figure?

That third bench well that was "a bust" has been abandoned. There is nothing in the file report to explain why it might have been a bust. Doesn't make sense.

March 13, 2015: a reader, Dan, who follows these wells very closely sent me the original information below. Today, he follows up on those initial thoughts:


I looked at CLR's most recent presentation and saw the graphic of update on enhanced recovery techniques in McKenzie and Williams counties (slide 10) so I was curious how the Hartman MB wells along with the two Bice wells stacked up after 90 days of production.

I was surprised to see the older wells with less frac effort as pretty comparable with the baseline wells in the graphic.

The 3-28H and 10-28 exceeded the slick water comparison which especially with the 3-28 surprised me.

You can see in the attached file I listed the 5 MB wells in the order they were drilled in a spreadsheet. Some interesting decline curves with these wells. Interesting production rates based on frac effort. Clearly the well that stands out the most is the Hartman 10-28. Its peak production month was less than 3-28H but when you look at the last month of the 90 day calculation the daily average was way above any of the others.

In the next couple months it will be very interesting to see what the decline rate does. The obvious difference with 10-28 is the frac effort. The more subtle difference is the fact that 10-28 is sitting atop an irregular pyramid of lower bench wells with an H1, H3, and H2 within 477' to the left and an H2 and H3 within 318' to the right (based on your distance shown previously and I averaged).

I see CLR has taken out another stand-alone MB permit for the Hartman unit. I wonder if that well will be drilled as a mirror frac effort of the 10-28 to try get a feel for how much impact the "composite effect" is having? 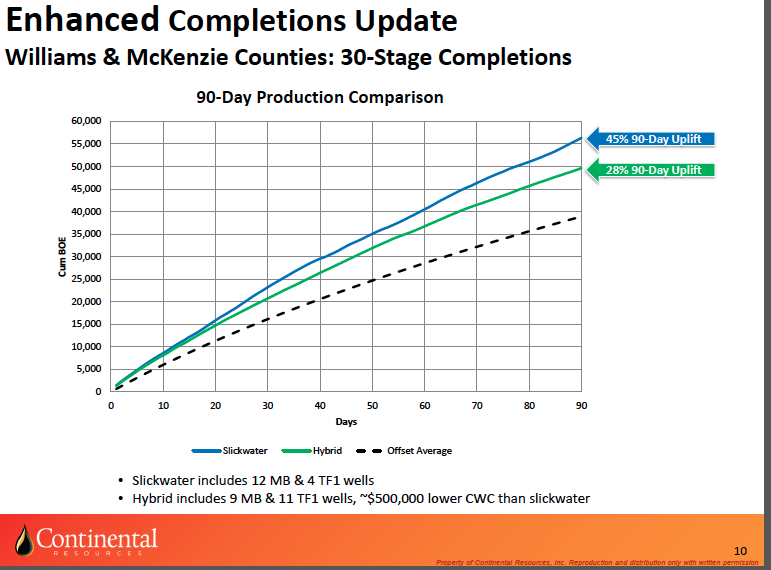 One last thought, if the two new wells remain as hardly worth pumping I wonder if it would be a good time for CLR to turn these wells into injection wells and attempt to replicate their success of fire flood secondary recover which they have perfected in the Cedar Hills field in Bowman County? Some years ago I can remember hearing the officers making the comment in a conference call that they intended to use their Red River success in Cedar Hills as a model for their efforts in the Bakken.

A reader was kind enough to send a production update of the CLR Hartman wells in Chimney Butte, section 28-146-95: 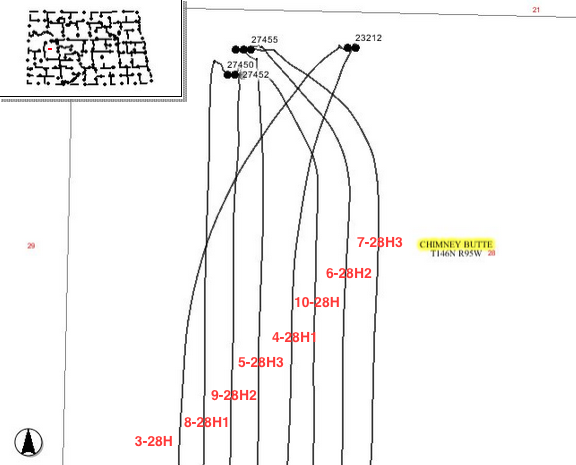 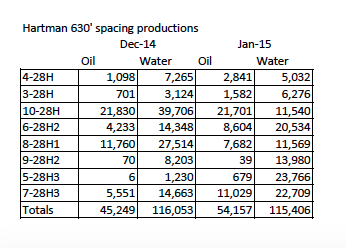 The reader noted:
The Hartman wells in section 28-146-95:
Other Hartman wells to the east in the same section:
Production profiles (production data will be update above, and not necessarily repeated below):


Comments:
General comments, mostly for newbies (these are my opinions; they may be completely off-base; maybe no one agrees; I have no background or formal training in the oil and gas industry; take these opinions for what they are worth; they are free, so perhaps worth about that much) :
Having said that, the majority of new permits being issued during this period of severe drop in oil prices are for 6 - 8 wells in the same location which may include more than just the MB and TF1.
Posted by Bruce Oksol at 3:27 PM