This is really cool and why a change in administration was desperately needed.

Under the Trump administration, the NY Times was reporting that "immunity" to Covid-19 was fleeting and it appeared that despite having Covid-19 once, it was likely that you were still highly susceptible to follow-on infections. That, of course, would make this an extremely unique virus. "Seasonal flu" virus seems to be quite unique in migrating strains year-after-year, but that's another story for another time.

But now, with a change in administration looming, the NY Times is reporting that, in fact, once you've had Covid-19, it's likely you will have immunity for many years. Well, how 'bout that?

It's just a party. 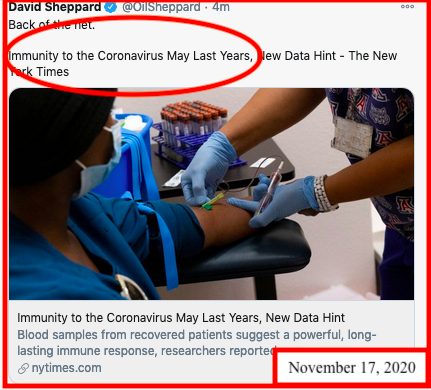 I'm in my Nabokov Lolita phase. It started when I saw "Lolita" on TCM some weeks ago, starring James Mason, Shelley WInters, and Sue Lyon, directed by Stanley Kubrick. As mentioned earlier I had tried reading the novel but couldn't understand it and found it tedious. I don't think I got past the first five pages.

But after seeing the movie, my curiosity was piqued again. I read about 25% of the novel before I got side-tracked. I came across a review of a book written about the "real" Lolita. I found it on Amazon, available through a third party seller, ordered it and after a delay of about two weeks, it arrived today. I had forgotten I had ordered it.

It is a hardcover, obviously "used" but it doesn't appear to ever having been read.

I normally don't go in for this genre, "crime stories," but this looks to be absolutely fascinating.

The Real Lolita: The Kidnapping of Sally Horner and the Novel That Scandalized the World, Sarah Weinman, c. 2018.

I tell crime stories for a living. That means I read a great deal about, and immerse myself in, bad things happening to people, good or otherwise. Crime stories grapple with what causes people to topple over from sanity to madness, from decency to psychopathy, from love to rage. They ignite within me the twinned sense of obsession and compulsion. If these feelings persist, I know the story is mine to tell.

Several years ago I stumbled upon what happened to Sally Horner while looking for a new story to tell. It was my habit then, and remains so now, to plumb obscure corners of the Internet for ideas. I gravitate toward the mid-twentieth century because that period is well documented by newspapers, radio, even early television, yet just outside the bounds of memory. Court records still exist, but require extra rounds of effort to uncover. There are people still alive who remember what happened, but few enough that their recollections are on the cusp of vanishing.  Here, in that liminal space where the contemporary meets the past, are stories crying out for greater context and understanding.

Sally Horner caught my attention with particular urgency. Here was a young girl, victimized over a twenty-one-month odyssey from new Jersey to California, by an opportunistic child molester. Here was a girl who figured out a way to survive away from home against her will, who acted in ways that baffled her friends and relatives of the time. We better comprehend those means of survival now because of more recent accounts of girls and women in captivity. Here was a girl who survived her ordeal when so many others, snatched away from their lives, do not. Then for her to die so soon after her rescue, her story subsumed by a novel, of of the most iconic, important works of the twentieth century? Sally Horner got under my skin in a way that few stores ever have.

I dug for the details of Sally's life and its connections to Lolita throughout 2014 for a feature published that fall by the Canadian online magazine Hazlitt. Even after chasing down court documents, taking to family members, visiting some of the places she had lived -- and some of the places where La Salle took her -- and writing the piece, I knew I wasn't finished with Sally Horner. Or, more accurately, she was not finished with me.

Sally Horner was kidnapped at age twelve. Rescued about two years later, she died two years after her rescue.