This is far beyond what I can comprehend -- at least for now. A reader sent me the link. The reader is very, very knowledgeable about the industry but says he has not heard of "spark spreads" before.

The link takes you to a February 8, 2013, EIA article: an introduction to spark spreads.

A limitation of the spark spread calculation is that it does not take into consideration other costs associated with the generation of electricity, such as pipeline costs or fuel-related finance charges, and other variable costs (like operations and maintenance costs), taxes, or fixed expenses. In that sense, a spark spread is an indicator of market conditions, but it is not necessarily an exact measure of profitability for any one specific generator.

I don't know -- can't recall -- if I've ever read -- completely -- a work by Charles Dickens. Over the Christmas break I decided to tackle Charles Dickens' A Tale of Two Cities. I got off to a slow start.

After three weeks, I have just completed the first two chapters. LOL.

Wow. Tough sledding. I have to get into the rhythm of Dickens' writing. I read the first chapter three or four times and there are still phrases / idioms which I cannot "decipher." But I moved on to the second chapter. It's starting to move along and I'm getting into the rhythm.

I've decided that I will read the book the way the book was first read when it came out. Dickens' released the book one chapter at a time, one chapter every week, beginning on April 30, 1859.  I will  read one chapter every night or so before I go to bed. It is likely I will have to read each chapter two or three times before moving to the next chapter, although with time, as I get into the rhythm and writing style of Dickens, I expect it will go faster.

This was an incredibly tumultuous period in western civilization: coming just before the American Civil War.

But last night, while reading the second chapter for the third time, and really, really reading very, closely, reading every word, it just dawned on me. Wow, Dickens sounds just like Mark Twain. Or Mark Twain sounds just like Charles Dickens. In fact, my first impression: Dickens is better at "doing" Mark Twain than Twain himself.

I knew not one thing about their corresponding timelines, if they were even alive at the same time. I wasn't even thinking about that.

So, the google search: charles dickens reads like mark twain. 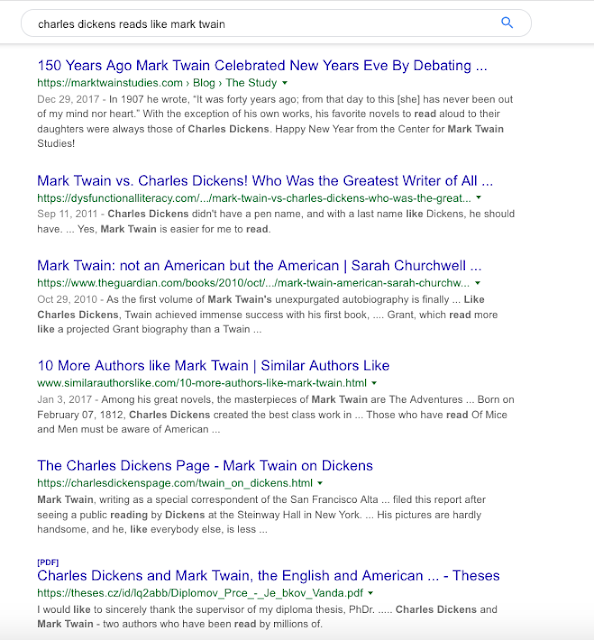 I wonder how many thousands of high school / college term papers have been written comparing Mark Twain with Charles Dickens.

The first chapter or two also reminded me of the early chapters of JRR Tolkien's Lord of the Rings. In fact one of the first characters in A Tale of Two Cities is named Tom.

Anyone remember Tom Bombadil?
Posted by Bruce Oksol at 6:19 AM