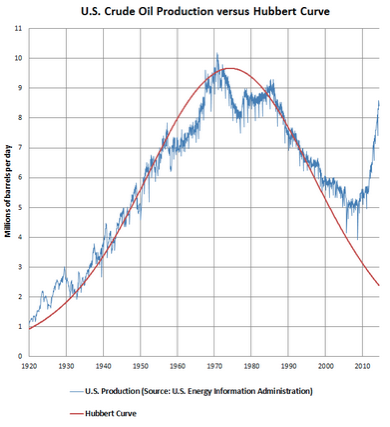 But, like global warming, the discussion on Peak Oil is closed.

And now there's so much oil being produced, the oil industry is voluntarily cutting back production -- because the price is too low.


U.S. average regular gasoline retail prices have increased for six consecutive weeks to $2.49/gal as of March 9, after falling to $2.04/gal on January 26, the lowest price in EIA's weekly survey of Monday prices since April 6, 2009. Rising crude oil prices, along with several outages at refineries on the West Coast, have contributed to the recent increase in retail gasoline prices.

In February, monthly average regional gasoline retail prices ranged from a low of $1.96/gal in Petroleum Administration for Defense District (PADD) 4, the Rocky Mountain region, to a high of $2.55/gal in PADD 5 along the West Coast. EIA expects U.S. retail gasoline prices to average $2.26/gal during the first quarter of 2015 and $2.39/gal for the full year, $0.13/gal and $0.05/gal higher than in last month's STEO, respectively.

Meanwhile, in California, self-proclaimed watchdogs are asserting that the industry is orchestrating the increase in gasoline prices in California. KION is reporting:


A consumer watchdog report says California oil refineries have about half as much gasoline on hand compared to the rest of the country. Tuesday a consumer advocate told a Senate committee the situation has lead to a spike in gasoline prices for Californians.
They say when refineries go down, gasoline prices go up.  And California is the worst case scenario.
The report further explains how Californians paid $47 billion extra, or $13 million per day more for gasoline compared to the rest of America over the last ten years.

Jamie Court, President of Consumer Watchdog says, "There is about an .84 difference in gas prices with the rest of America right now. Crude oil costs the same in California. This is really oil companies making big profits. The Senate committee agrees with our report that all of this extra money, the .84 per gallon is going right back into the pockets of the oil refinery and this committee is going to be discussing what can we do to change that."

Court says his group and other advocates plan to urge the governor and the Legislature to require oil refiners to keep another week of gasoline inventory on hand to avoid gasoline price spikes in the third largest gasoline consuming economy in the world.
Court was asked what he'd do to change the status quo, " First of all, we don't have enough real time information. We did a report showing that over 10 years we've had about  10.7 days worth of supply on hand in California compared to 18 in America. So we have always been behind in supplies. So we need real time data about when refineries go down and why. And we need information as to what days the supply is on hand, that's transparency."