Four-Week Jobless Claims Average -- Lowest Since 1969 -- Making America Great -- And Keeping Yet Another Campaign Promise; Hillary's Campaign Promise: Putting A Lot Of Miners Out Of Work

Earlier this evening when it was noted that Denmark became a net importer of oil for the first time, I wrote:


So, How Did That Renewable Energy Plan Work Out? Europe May Be The Only CONTINENT In The Universe To Depend On Imported Energy.

Backtrack to: Europe At A Tipping Point, one of "the big stories" that I have been following since the beginning of the blog.

Now this, which I think is a portent of the future:

And then this screenshot from the Drudge Report -- great juxtaposition: 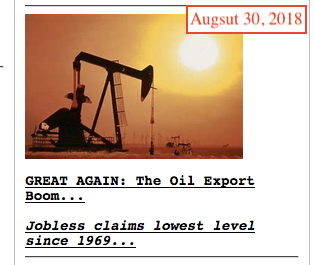 
New claims rose by just 3,000 to a seasonally adjusted 213,000 last week. After three consecutive weeks of declines, economists had forecast a rise to 214,000, according to Bloomberg.

Jobless claims are an indication of layoffs and have been closely watched this year for signs that trade disputes might weigh on the U.S. labor market. So far, there are no signs that tariffs have cost the U.S. economy any jobs.

The four-week moving average of claims, which smooths out weekly volatility and is considered by many economists to be a more reliable gauge of conditions, fell by 1,500 to 212,250. That is the lowest level since December 1969, according to the US Labor Department.

Other than one's family, shelter and food, I'm trying to think of one thing that is more important than being employed.
Posted by Bruce Oksol at 11:52 PM