Who Got To Governor Jerry Brown? -- July 25, 2018; Saipem With Almost $1 Billion In Pipeline Contracts On Four Continents

Saipem: an Italian oil and gas industry contractor. It was a subsidiary of Italian energy company Eni, which owned approximately 30% of Saipem's shares until 2016.[2] Saipem has been contracted for designing and constructing several pipelines, including Blue Stream, Greenstream, Nord Stream and South Stream.

Saudi Aramco has awarded Saipem a procurement and construction contract for its South Gas Compression Plant Pipelines project tied to the development of the Haradh gas plant (HdGP) in eastern Saudi Arabia. Saudi Aramco stated that the program as an initiative for “improving and sustaining gas production from Haradh and Hawiyah fields by reducing choke pressure at the wellhead to 300 pounds per square inch gauge.” The company added that the program will extend plateau life of both fields by two decades while maintaining production rates.

Also on Wednesday, Saipem stated that it received a contract from ExxonMobil Iraq Limited for the DS6 project in the West Qurna field in southeastern Iraq. The 23-month project calls on Saipem to optimize a plant to boost its overall capacity and will be executed primarily from Saipem’s Rumahila fabrication yard.

Outside of Asia, Saipem – through its Saimexicana unit – secured a contract from Pemex for work on its Miguel Hidalgo refinery, which is located in Tula de Hallende north of Mexico City.

Saipem also announced that it obtained contracts for the following projects in Africa and Europe:

Trying something new while my wife is out of town for a couple of weeks. Salmon filet on the right. Huge artichoke (boiled first, and then grilled). Same with potatoes. 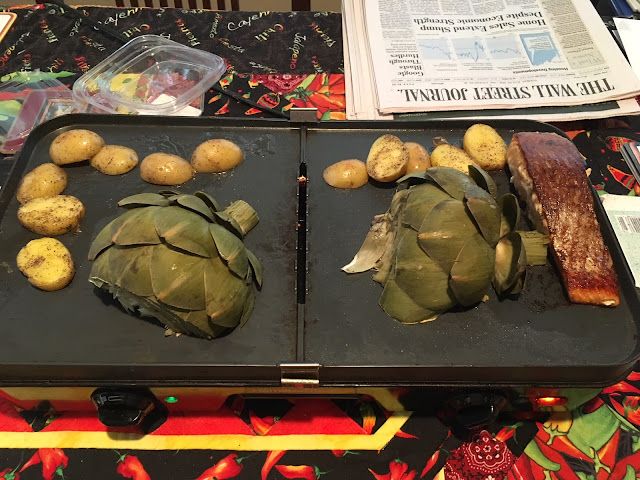 Note: the Wall Street Journals are stacking up, being saved for my wife. I no longer read the hard copy. I only read the digital copy and not much of that either.