The Road To New England Gets Curiouser And Curiouser -- January 2, 2018 -- And, Yes, One Reason Why I Love To Blog

Some of you may have seen this over at the Drudge Report. I saw it but did not click on the links. I wish I had. An alert reader did. 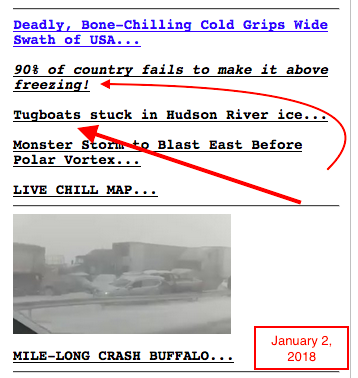 This is what he sent me:

Regarding New England's energy situation ... I was curious as to how stable the oil supply was to restock the fuel being burned to generate electricity (the author of the Forbes article was aghast that 4,000 Mwh worth was oil-derived the other day.

Anyway, a guy mentioned that a couple of tugs/barges delivering fuel oil got stuck in the frozen Hudson the other day and the Coast Guard had to be called in.

Google news has the stories with great pictures.

There have been several smaller pipelines proposed to run from Albany to the NJ refineries and back to deliver Bakken crude (arriving at Albany via CBR) and get the refined product back upstate so frozen barges would not be an issue.

Surprise! Opposition has been preventing the build out.

If you haven't been following the story, you can check the tag, "Road_To_New_England," and check out the ISO New England website.