In a recent post, thirteen (13) areas were delineated in the Williston Basin Bakken:

A reader sent me a presentation from the premier oil and gas industry consulting firm that also breaks the Williston Basin Bakken into three areas:

There appears to be only one difference between the two groups: one analyst breaks Parshall and Sanish into two areas; the other analyst combines them. Both groups total thirteen. So, what is the "new" group in that second analysis? The Montana Frontier.

The analyst includes an incredible "heat map" of the Williston Basin Bakken.  The "heat map" is color coded, ranging from blue - through green - yellow - orange - red (the ROYGBIV rainbow) with "red" as the best ("hottest") plays.

In 2014, areas that are predominantly red:

Significant portions of the following areas are also red:

Areas with red along the river:

Surprisingly, even a small area in the far north of Divide County, area 1, has some red. 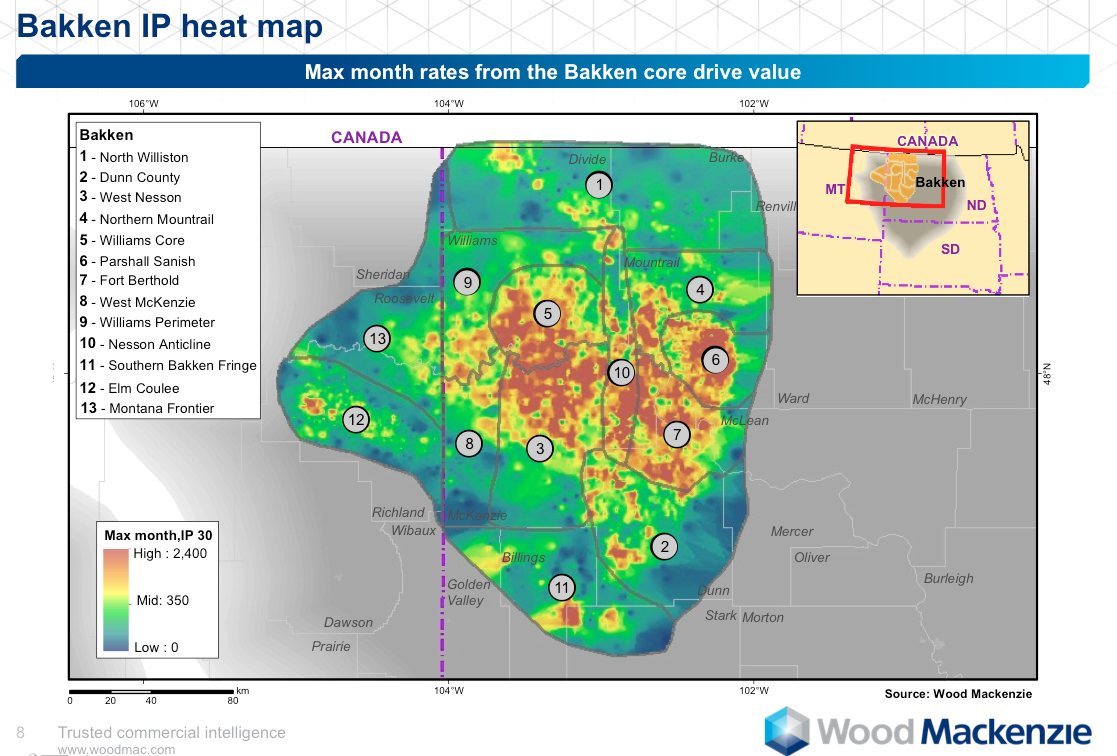 The presentation was undated (as far as I could tell, but the URL suggested it was a December, 2014, presentation. The slide in oil prices began in October, 2014.

The very next slide in that presentation is a "heat map" of the Eagle Ford. In the Bakken slide above, the "heat" goes up to 2,400 bopd for first 30-day IP.

In the Eagle Ford slide, the "heat" goes up to 3,000+ of boepd per month. The legend does not specify 30-day month, and it is clearly a condensate play, though one area has evolved into an oil play, the Hawkville Condensate to the far southwest.

Two observations with regard to the Eagle Ford heat map:
The Permian, of course, is a n oil play, but its horizontal component is "high cost" compared to the Bakken.
Posted by Bruce Oksol at 11:23 AM