Random Graphic Of Stratigraphic View Of The "Pronghorn"

[See comments: a reader has simplified this, and has also provided a link to a pdf.  It's really quite a great link: 173 pages with great graphics, and very, very recent (2013); Colorado School of Mines.]

In the process of looking up something else, I came across this nice graphic showing where the Pronghorn formation is, sitting between the Lower Bakken and the Three Forks.

See comments below. One of the comments:


Some operators (Continental comes to mind) appear to be calling the Sanish/ Pronghorn 'TF1'. If one compares the TVD/ target depth of their TF1 wells to offsetting well logs they are often targeting within 30' of the basal Lower Bakken Shale- which would be in the Pronghorn. The September Investor Presentation illustrates this on page 14.

I haven't compared the geologic presence of the Pronghorn to the number of Three Forks target intervals in Continental's experimental high-density areas, but perhaps they are drilling fewer wells per pad where this formation is absent.

From an OXY USA report in the Manning oil field, general area of Whiting's Pronghorn prospect: 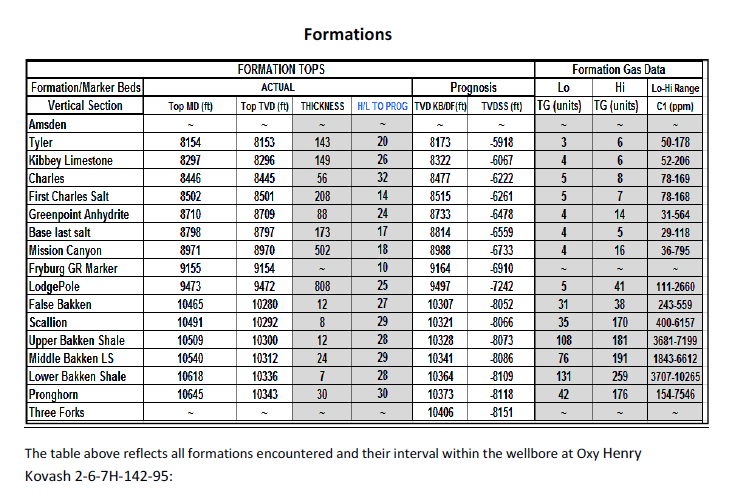 This might be a good time to review the geology of the Bakken (for newbies).

The following is taken from the geologist's report for #27139:

End of this report; the target was the middle Bakken.

The following is taken from the geologist's report for #24694:

Carbon shows: the highest gas recorded in this well in the middle Bakken porosity was 5,000 units.

Target zone was 13 feet to 23 feet below the lowest Bakken shale, about 10 feet thick.