June 11, 2015: an individual who has lived in Bowman area all his life noted this yesterday morning:


I just drove past the Powell well this morning and they were set up with a workover rig and I'm sure they were drilling the laterals for the well to be fracked. It sure appeared that way.

May 4, 2014: personal correspondence -- MRO's next Tyler wildcat will be in section 29-134-104. That makes sense. That is in one of the first four drilling units MRO requested for testing the Tyler. MRO has drilled two of the first four units: a Rundle Trust well and a Powell well. The first Rundle Trust well has come off the confidential list; MRO is still studying the geology and core samples. The Powell is yet to come off the confidential list. Section 29-134-104 is northwest of Rhame, North Dakota. [To see a graphic of the area: the June, 2013, dockets when first noted MRO Tyler interest and four 1280-acre unit locations.]

May 3, 2014: I'm still trying to sort this out, and I think I have it. Could be wrong. In the June, 2013, dockets, MRO identified four separate 1280-acre units to test the Tyler with one well in each drilling unit. In those four drilling units, they drilled two Rundle Trust wells and one Powell well. Due to problems with one of the Rundle Trust wells, they abandoned it, and immediately drilled another. So, for all practical purposes: MRO drilled two Rundle Trust wells and one Powell well, so far, of the four originally planned wells. In the May, 2014, dockets, MRO revealed their intent to drill two more Tyler wildcat wells in the same general area.


The Rundle Trust well that Marathon reported as "plugged or producing" is the well that is plugged.

The well that has a wellhead and production battery is not actually producing yet.

Marathon is waiting to frac that well and I would guess the Powell well as well until the weather warms up.  Because of the thickness of Tyler formation oil when cold, all of the flowback equipment would have to be heated for the oil to flow even half way decently.

I was told that it would be at least March or so before they fracked those wells.  I also found out second hand that they are considering fracking those wells using diesel to try to thin the oil out more.  It will be interesting to see how it all works out.

February 8, 2014: update on the MRO-Tyler-Powell well south of the Rundle Trust wells.

A reader points out that MRO permitted another Tyler well yesterday:
See this post back on June 2, 2013, for background. 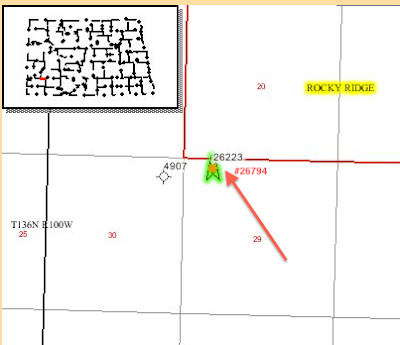 The reader and I both find it interesting that MRO would place two wildcats right next to each other if the company was in the process of "exploring" or "delineating" the Tyler formation in this area. In addition, the application (based on the NDIC docket agenda) suggested there would be just one horizontal in this drilling unit.

The individual who alerted me to this new well is hoping some reader might have insight on MRO's decision for two wildcats right next to each other. One going north/one going south? A problem with #26223 and will try again from same pad?

[Udate: two folks have now written, asking the same question.]
Posted by Bruce Oksol at 8:55 AM