Note: in a long note like this, there will be content and typographical errors. If this information is important to you, go to the source.

Number of new permits by year:

Email ThisBlogThis!Share to TwitterShare to FacebookShare to Pinterest
Labels: Permits_2020

First things first. This is really cool. When the NDIC Director's Cut came out in mid-December with October, 2020, data, the preliminary numbers suggested that month-over-month there was a slight decline in North Dakota crude oil production, October/September.

My "blog title" at the time: October production exceeded that of September. I was pretty sure that when the official figures came out later the "newer" / revised numbers would show that increase. And, in fact, they did, according to the EIA 914 for October, 2020.

The preliminary data at that time, from the NDIC Director's Cut:

Over at the sidebar at the right, I asked, somewhat tongue-in-cheek, which would survive the meltdown best -- the Bakken or the Permian.

In the big scheme of things, the Permian did better through the slowdown, but at least for the most recent production numbers, North Dakota proved more resilient, up 0.5% m/m vs 01% for Texas.

But I'll give "it" to the Permian.

Anything else of note in the most recent EIA figures? Month-over-month, change:

Okay: this blog is closed. Comments will be accepted but no more updates. Enough is enough. Time to move on.

Later, 1:53 p.m. CT: first it was the buskers about six months ago; now, through Emmylou Harris, it's "the basket houses": a cafe or similar establishment where musical performances are given and the performers are then paid with money placed in a basket by members of the audience.

Later, 1:24 p.m. CT: more on Doug Sahm (and Charlie Pride, and Bob Dylan). Some may recognize Doug's backup vocalist on this song:

Later, 1:12 p.m. CT: flashback: when Sir Doug died in New Mexico. From that link, provided by the reader who started this whole digression from the Bakken:

In the 1970s [Doug Sahm] became an icon of the ``Cosmic Cowboy'' scene in Austin, along with Willie Nelson and Jerry Jeff Walker.

In 1973 he recorded an album called Doug Sahm & Band, which featured appearances by Bob Dylan, Dr. John and Flaco Jimenez.

In the late 1980s Sahm teamed up with Freddy Fender, Jimenez and Meyers to form the Tex-Mex super group The Texas Tornados, which had hits with songs such as "Who Were You Thinking Of ?" and "Hey Baby Que Paso?"

We lived in San Antonio, TX, for over ten years before moving to north Texas in 2013 (during those ten years or so we also spent much time visiting and living in Portsmouth, NH; Summerville (Charleston), SC; and Boston, MA). But we have huge emotional ties to San Antonio, TX.

A reader sent me links to two Flaco Jiménez videos -- one of them on this page. My reply to the reader after watching the videos:

So much could be written.
1. Sir Arthur Conan Doyle's detective Sherlock Holmes was famous for identifying the geographical origin of an individual based on accent, dialect, whatever. Well, I about fell off my chair listening to Flaco Jiménez -- he sounded exactly like my father-in-law. Flaco was born/raised in San Antonio. My father-in-law was born / raised in Beeville, a small town just south of San Antonio.
2. I had forgotten all about Freddy Fender and the Texas Tornados. I used to listen to them frequently; don't recall if I've ever posted anything by them on the blog.

3. Finally, all that blue. Let's call it indigo. You can read about it on the blog when I get it posted later this morning.

Okay, so here's the video:

Look at all that blue. Let's call it indigo. 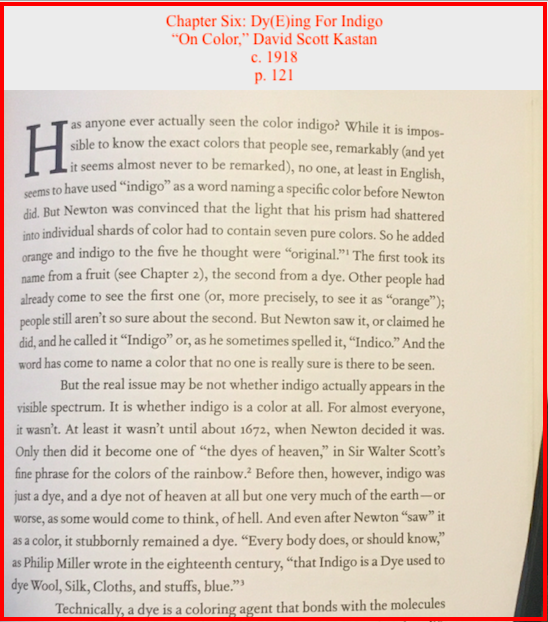 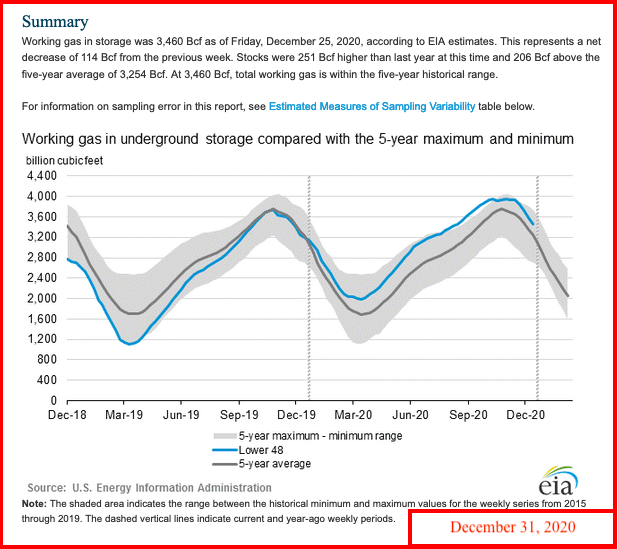 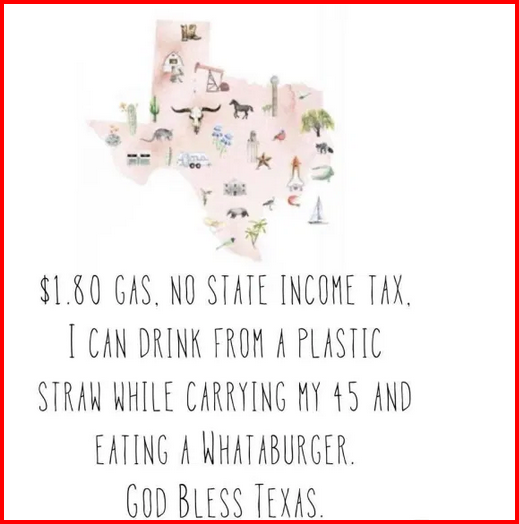 That about says it all.

Last night, I watched two classic Hitchcock movies and a third of the same genre, all back to back. Absolutely outstanding. I had seen all three in bits and pieces over the years but do not recall ever having watched them from start to finish.

I remember, the first time I saw some early scenes in Cape Fear. I was unable to "handle" the terror -- Robert Mitchum -- wow -- and so I quit watching early in the film. But last night I was ready for it and watched the movie in its entirety.

I had never noticed all the "bird" stuff in Psycho which foreshadowed The Birds.

The Birds: I'm glad I finally watched the entire movie, but have no desire to ever see it again. I could watch Psycho again. Cape Fear? Probably not.

Restaurant closures: A nice overview, albeit superficial, of the number of restaurant sites that are being closed among the top chains.

The pandemic simply expedited the closure of a lot of marginal restaurant locations. Worse than most years but in the big scheme of things, not that big of a deal.

Twenty-eight restaurant chains listed. Number 28 on the list was Benihana. In 2019 and 2020, it announced only one Benihana that was closing, the one in Sacramento, CA, but then this: "the company this year announced plans to expand in the U.S. and develop franchises in the Caribbean, Central America and South America.

JCP CEO: broke through the glass ceiling only to fall through the sky light. CEO out after two years of failure. Harsh.

Amazon gets bigger: swallows up podcast startup Wondery. Link at The Wall Street Journal. Paywall but I'm sure the story is everywhere.

Minot AFB:  B-52s flying over Mideast are from Minot AFB, ND. A nice way to spend the winter, in sunny Saudi Arabia or from wherever they are based. Probably not landing / taking off from aircraft carriers, but nothing surprises me any more when it comes to the B-52. LOL.  Just kidding. Can you imagine the size of the a/c carrier to support a B-52 or two? 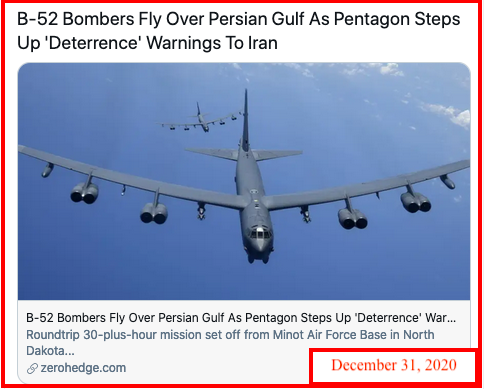 Energy: from a few days ago -- the largest energy bill in a decade was just passed. You can guess what's in it. Savvy investors will take note. I'm thinking distribution transformers.

Colleges: finally cutting tuition. And along with severe revenue cuts from athletic programs, one can imagine a number of universities / colleges in financial panic. Again, for the archives; I'm not interested.

Just asking for a friend: 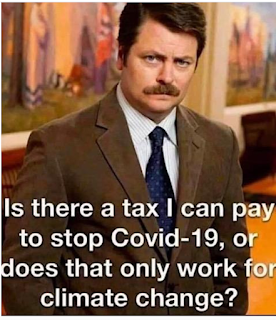 No Wells Coming Off Confidential List To Be Reported Today -- RBN With Top Ten Blogs This Past Year -- December 31, 2020

No wells coming off the confidential list (there was no June 31 six months ago).

Well, here we are. The last day of 2020. We are tempted to say “unprecedented” to describe the year. But the word is so overused — there’s been an unprecedented use of the word “unprecedented” — let’s just say it will be good riddance to have this one behind us. After all, we’ve seen a collapse in transportation fuel demand, an oil price war between major producers, negative $37/bbl crude prices, massive LNG cargo cancellations — the list goes on — all in the context of a global pandemic and much of the world committed to weaning itself off fossil fuels over the next few decades. How do you make sense of all that? How do you anticipate when it’s going to be “all right” again? Well, one thing we can do is to heed the events and trends that captured the market’s attention during all this chaos. In other words, to put a spotlight on the things that the market considers top priority — crowd-sourced market intelligence, if you will. Well, at RBN we have one way to do that. We scrupulously monitor the website hit rate of the RBN blogs that are fired off to over 30,000 people each day and, at the end of each year, we look back to see which topics generated the most interest from you, our readers. That hit rate reveals a lot about major market trends. So, once again, we look into the rear-view mirror to check out the Top 10 blogs of the year based on the number of rbnenergy.com website hits.

As you might expect, this year’s Top 10 has absolutely nothing in common with 2019’s. Back in that long-gone era, it was all about supply — too much of it. The market needed more pipelines, more export docks, more petchem plants, more gas-processing plants, more of just about anything infrastructure-related. By April 2020, that world was a distant memory. This year the Top 10 is mostly related to demand — not enough of it. COVID whacked demand for all things hydrocarbon, which crushed prices, prompting well shut-ins and drilling cutbacks, which slashed production, leaving much of the infrastructure developed in the pre-COVID world well short of enough throughput to fill capacity. Given this new reality, let’s see what the top blogs of 2020 can tell us about how the market dealt with the meltdown, why some market segments have recovered faster than others, and what we might expect in the coming year. Just like any year-end Top 10 list, we’ll start with #10 and work our way up to #1. 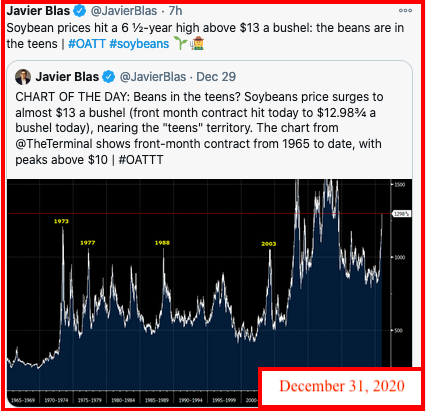