Color coding for this map needs to be updated, look at the legend for active cases:

And why is it not "per capita"? 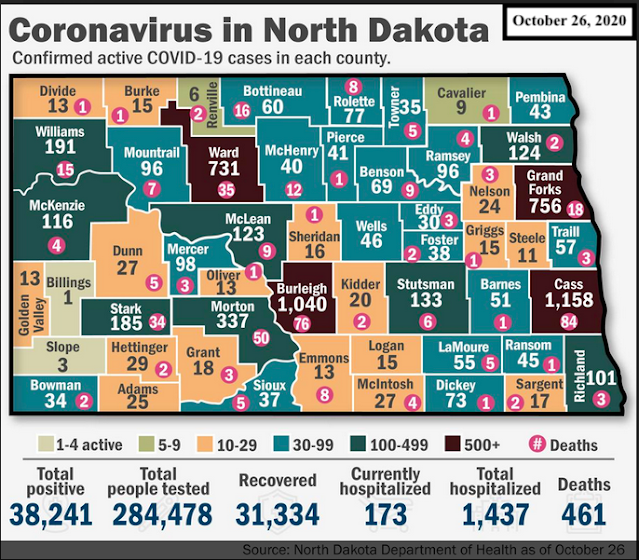 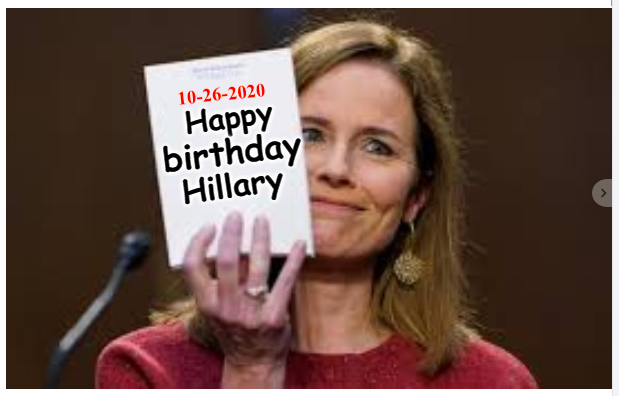 One "cartoon" pretty much encapsulates eight years of politics.

These are no longer atypical wells in the Bakken. If they were atypical we would be seeing headlines in The Bismarck Tribune and comments from Lynn Helms regarding these wells. In fact, crickets.

These are the type of wells that have Saudi Arabia and Russia concerned.

Vladimir Putin gave it away when he recently pointed out North Dakota by name, talking about how good the wells in North Dakota are -- but noting that the shale revolution is temporary. It is. Probably lasting about one hundred years in North Dakota, longer in the Permian.

These wells all had moderate fracks.

These were reported today:

From the November NDIC hearing dockets, a case, not a permit:

There are currently seven producing wells in that drilling unit. 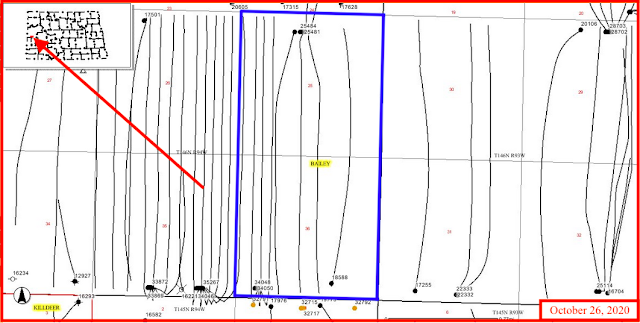 Our six-year-old granddaughter Sophia spends  lot of time on the iPad. In addition to remote learning on an iPad, she takes piano lessons using an iPad app, as well as Spanish lessons.

But she has a lot of non-screen activities: she loves to paint; she has a huge Barbie doll collection (I find them incredibly affordable compared to so many other things these days); she loves Legos; and, we are building quite a collection of Hot Wheels.

Prize collection for me, of course, the Beatles Hot Wheel vans. 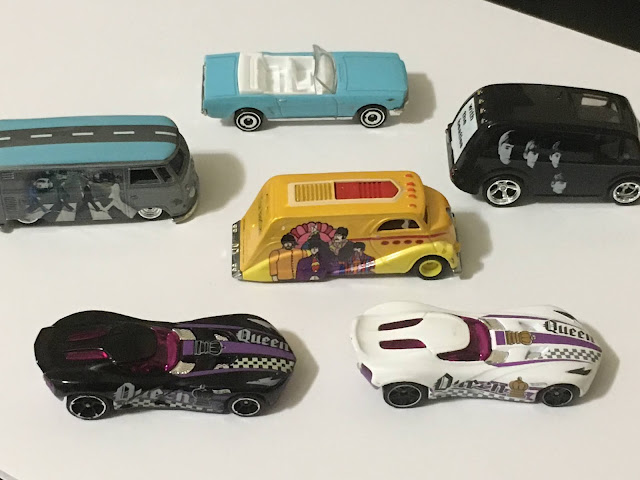 From the linked WSJ article:

Add Barbie to the list of the pandemic’s biggest winners.

Mattel Inc.’s flagship doll posted a 29% sales increase in the third quarter, leading the toy company to 10% revenue growth in the period.

It was the largest quarterly increase posted by Barbie going back at least two decades. “The brand is more relevant than ever at 62 years old,” Mattel Chief Executive Ynon Kreiz said in an interview Thursday.

After years of struggles and rising competition from other dolls, Mattel sought to reinvigorate the Barbie brand by introducing new body sizes, skin tones, hair colors and career paths. Recently, Barbie has also been boosted by hits like a “Color Reveal” product where you dip a doll into water to disclose what kind it is.

The pandemic has helped, too. Parents say they are looking for ways to entertain their children that don’t involve a screen and many are gravitating to familiar toys.

PSA: if your state's department of natural resources wants to visit your land for some reason, here's a suggested response. From a reader. Thank you.

Politics: I'm not following the news, and I don't watch network or cable television except for sports and old movies, but what little I see on twitter suggests more going on behind the scenes than being reported. First of all, in this clip, Jill Biden seems resigned to the fact her husband is "losing it." I may be wrong, but she certainly seems tired and/or uninterested. Remember, this is a political ad or a political event of some sort and she should be showing incredible enthusiasm. Second, where is Hillary? No matter how angry she is about how this all played out, she detests Trump and one would think she would be on the campaign trail doing her best to defeat him. And, finally, the former president? Belatedly, he finally did one ad for Joe Biden. And that was it.

Probably the same story in the US: trucking provides rare boost to Europe oil demand. Link at Bloomberg via Rigzone:

Europe may still be mired in a deep economic slump, but the region’s truck drivers are hauling bumper volumes of goods across the continent as online shopping surges, offering a rare boost to oil demand.

Girteka Logistics, owner of Europe’s largest fleet of trucks, said it will deliver about 800,000 full loads this year, up about 10% on 2019. The company has more than 7,000 vehicles, moving everything from ice cream to electronics.

The freight surge is being driven by a boom in e-commerce during the coronavirus outbreak, said Kristian Kaas Mortensen, director of strategic partnerships at Girteka. While individuals have had their movement limited by virus restrictions, the Vilnius, Lithuania-based firm has been hauling bumper volumes of consumer goods, food and pharmaceuticals, often for home consumption.

“The money that is not going to Spain on vacation, or on a business trip, is going to another spending,” said Mortensen. “That happens to be a spending that benefits the transport patterns we are operating in.”

Third world state: PG&E cuts power to hundreds of thousands. Again. Link at The WSJ. Hard to charge your Teslas with no electricity. By the way, hard to fill your gasoline tanks when the electric pumps aren't working.

PG&E Corp. said it was pre-emptively cutting power to about 361,000 customers in northern and central California in an effort to prevent wildfires, marking the largest such shut-off it has reported this year.

The San Francisco-based utility started the shut-offs Sunday morning by de-energizing electrical lines in the Northern Sierra region, and then continued in other areas ranging from the San Francisco suburbs to wine country to small rural towns. The blackouts affect customers in portions of 36 counties where a forecast windstorm and dry humidity levels pose a high risk of causing active power lines to spark catastrophic wildfires.

PG&E said it would check its power lines for damage and begin turning power back on after the storm subsides, with service expected to be restored for most customers within 12 daylight hours after the severe weather ends.

ATT: over at SeekingAlpha.

Shale on his mind: how big a deal is the Bakken? For Vladimir? A pretty big deal -- Bakken -- living rent-free in Putin's mind. LOL: 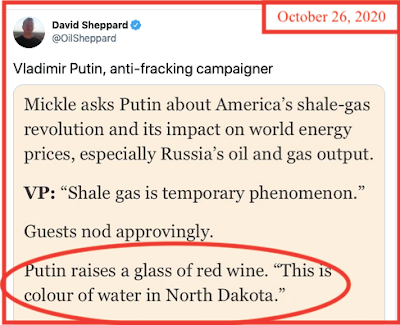 RBN Energy: keepin' up with the daily twists and turns of volatile, Covid-era energy markets.

Down to only two months left in 2020. Whew! We’ll all be relieved to see this one disappear in the rear-view mirror. It’s been an extreme roller coaster ride for oil and gas — from the onset of the COVID pandemic and the crude price collapse in the spring, to withering demand for transportation fuels, to one hurricane after another, to chaotic swings in natural gas prices. And being thrashed about by all this turmoil are the natural gas liquids, with each NGL product taking its own wild ride through erratic market conditions. It’s been a challenge just keeping up with what is going on. At RBN, we’ve been working on a new app to address this challenge, and today we are rolling it out to you, as a reader of our daily blog. We are talking about access to everything from spot and futures prices, to market statistics, to reports on intra-day pricing, and to market alerts as they happen. Sound interesting? If so, hang on to your hat and read on in this RBN product advertorial.

We call our new app ClusterX. It’s available today for you to test drive, either on your mobile device or any PC or Mac web browser. If this seems vaguely familiar, it’s because we discussed a friends-and-family release of ClusterX for some of our subscribers a few months back. And, in recent weeks, we’ve had pre-release ads on the website. Today, we are rolling out the real thing.