Global oil prices: something is happening -- note the increase in Brent and OPEC basket, as well as the differential between WTI and overseas blends:


A wave of new oil refineries coming online in the Middle East and China will knock others offline, ushering in a period of consolidation, according to a new report from Goldman Sachs.

Global oil demand has taken an enormous hit from the Covid-19 pandemic. Depending on who you ask, demand may recover swiftly, or it may take a few years, or demand may actually never recover to levels seen prior to the pandemic.

DNV just published a report that estimates that oil demand may have peaked in 2019, although it warned that demand in 2050 will still be about where it is today. Improvements in energy intensity offset economic growth, but because demand is mostly flat for the next few decades, the world makes little progress on climate targets in this scenario.

Email ThisBlogThis!Share to TwitterShare to FacebookShare to Pinterest
Labels: NG_Fill_Rate_2019_2020

I'm not quite sure if we are ready to move into Bakken 5.0. We'll talk about that later. 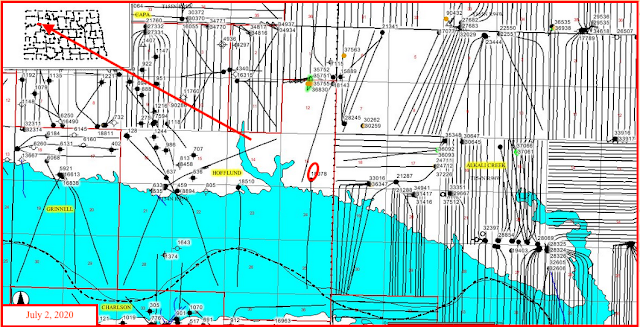 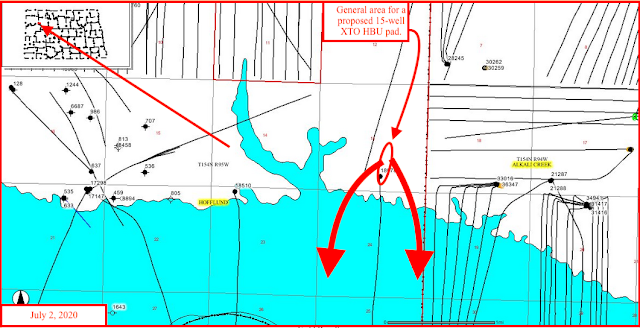 This was posted here.

82a. What do you mean by Bakken 2.0? See this post. Important data points:


"New" and very common well designations started appearing just as we went to Bakken 4.0: SI/A; F/A; F/NC. Link here for examples. SI/A are wells that have been completed, have come off the confidential list, but are immediately shut in, sometimes with no production or very minimal production (less than 500 bbls) but often 15 days of great production, such as 17K bbls crude oil over 14 days. I didn't know whether to highlight them in "red" or "blue," but because they came off confidential list "on time," had been completed and had production following a frack, I highlighted them in "red." F/A; F/NC were wells that producing wells (DUCs) reported as completed. It appears that in Bakken 4.0 we will have wells that come off the confidential list, or the SI/NC list, but are immediately shut in or choked back significantly. See this post, dated March 26, 2020, first time I tagged a post with "Bakken_4.0."

After reading several recent file reports and comparing them with countless file reports over the years, it appears that this is the typical drilling history for a Bakken/Three Forks well:
They then shut up shop again while waiting for the other wells on the pad to be drilled. Depending on any number of factors, they may go back in and complete (frack) the well soon after the big rig is moved off site, or they may come back months or one year later to frack/complete the well.

The fracking spread is probably on the pad for ten days, plus or minus depending on the number of wells to frack.

I think if they "had to," they could drill and complete a four-well pad in about 30 days. Two big rigs on the pad, and in ten days have all four holes drilled to depth. Then frack the four wells "simultaneously" over 10 - 20 days With infrastructure in place in most Tier 1 areas by now, once completed, the well would be recording runs pretty quickly.
Posted by Bruce Oksol at 3:58 PM No comments:

A Closer Look At The Two Most Recent CLR Wells Reporting From The Brooklyn Oil Field -- July 2, 2020

From the file reports:

Corona virus: the fake numbers story -- pending -- update: I'm not going to post anything on corona virus now -- I've lost interest -- I'll do it later. The numbers are so questionable. If one just thinks through the process, one knows how questionable the numbers are.

Sorry: prominent climate activist apologizes for "alarmism." Speaking of which: I watched another episode in a continuing PBS series on paleontology last night (I couldn't bear watching another airing of "Singing in the Rain" on TCM).


It's always amazing to see scientists question every bit of dogma we've been taught over the past three decades, but when it comes to global warming, the science is settled. The "star" paleontologist -- a charming young woman -- lost all credibility when she said the "science was settled." Wow. Another empty head, it appears.

Rumors: new portrait on "Aunt Jemima" syrup -- George Floyd. Personally, I think "Uncle Floyd's Slightly Off-White Rice" would be a much better fit. Log Cabin syrup. LOL. That name ain't gonna change. It's a favorite in San Francisco. And, so, we will have "Uncle George" syrup. 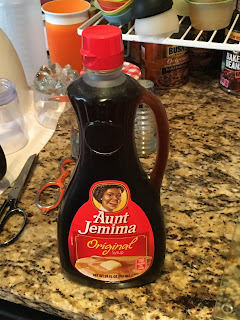 Syrup: by the way -- of the three major widely available pancake syrups out there, Aunt Jemima is the least "messy" when pouring. I don't know how "they" do it, but there is no dripping after pouring Aunt Jemima syrup. Just saying.

Not being reported in MSM: I haven't seen a copy of the NYT ever since Starbucks quit selling newspapers, but my hunch is the the NYT is not reporting the jobs story today.

Not fake news: both parties and both candidates reported record amounts of "cash" donations 2Q20. DNC and Biden took in more than the RNC and Trump, but the latter still has a much, much better balance sheet.
Posted by Bruce Oksol at 9:18 AM No comments:

Reasons Why The Market Is Up; Three Wells Coming Off Confidential List Today -- July 2, 2020 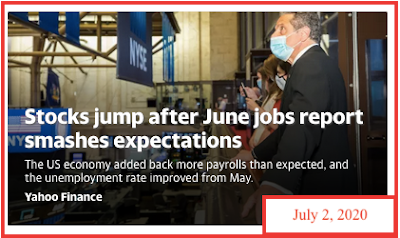 Report: US employers added almost 5 million jobs in June. That's more job creation than any president in history. Five million jobs added in one month. President Trump able to claim all-time new employment records. LOL. It's amazing how bandanas were the answer. If we had only known.

The wall: Mexico now has the 6th-deadliest outbreak, passing Spain. This is a great Covid-19 update. Great weekend reading. Finding and posting this link is worth the price of the subscription to the blog.

They're reading the blog. We talked about this yesterday: 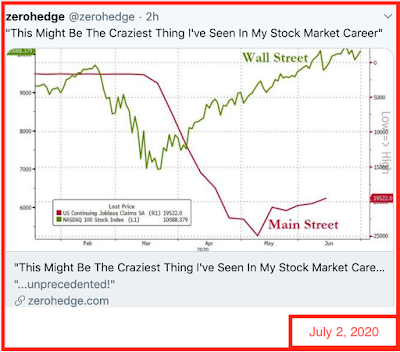 Futures: the Dow is up almost 300 points in pre-market trading. Who wudda thought? Prepare for lots of volatility today. LOL. I love it: the headlines that tell us in ten words or less why the market is up, down, or flat. Today: the market is up in anticipation of a great jobs report. Some alternative headlines:
Looking at the Dow components, I can't get excited about any of them. LOL. Even AAPL is hardly moving.

Motley Fool: could the new iPhone 12 propel AAPL to $500? Sure. Just not any time soon. Click bait.

OPEC basket:wow, wow, wow -- it looks like Prince MbS has quit playing games. OPEC basket surges -- hits $42.66. Link here. The rise is remarkable. This is stunning to say the least. Oilprice doesn't reflect the surge. WTI is barely above $40, but if OPEC basket number is real, one would expect WTI to follow. We'll see. 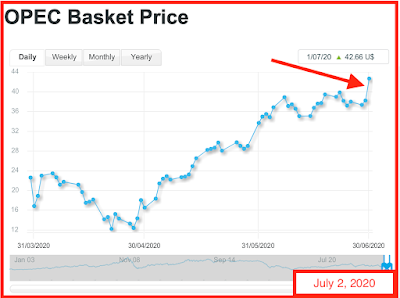 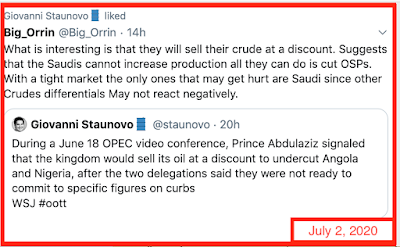 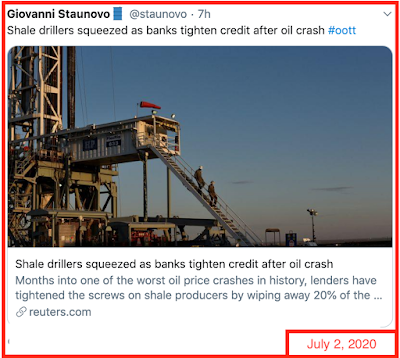 Permits coming off the confidential list today -- Thursday, July 2, 2020: 9 for the month; 9 for the quarter, 454 for the year:
RBN Energy: Texas solar ramps up at expense of coal, no natural gas. Dog bites man.


Solar photovoltaic projects accounted for an impressive 40% of all the new electric generating capacity installed in the U.S. in 2019 — the third time since 2015 that solar additions outpaced installations of natural-gas capacity. And the early 2020s are shaping up as another good period for solar, especially in states that offer both intense sun and the broad expanses of land required for large-scale solar projects. Texas is a case in point; some 8,000 megawatts (MW) of new solar capacity is expected to be added there in the 2020-22 period. Solar power, like wind power before it, has come to be so prolific in the Lone Star State that you’d think it would be having a significant impact on how much gas-fired generation is needed day to day, right? Today, we discuss the increasing role of solar generation in the second-largest state and its impact on the demand for traditional power plant fuels.

While rig counts and production have been sagging in the Permian Basin and other plays as producers and their financial backers cut back on investments, there’s a surge under way in capital spending on renewables, especially in West Texas but also in other parts of the state. Though Texas has long been the U.S.’s leader in wind generation, with almost 30,000 MW of wind farms now online, the state’s grid has been getting even greener via new growth in solar generation — a sector historically associated more with California and the desert Southwest than hydrocarbon-centric Texas.

Posted by Bruce Oksol at 7:15 AM No comments: