The well:
The Rath Federal wells are tracked here.
Posted by Bruce Oksol at 8:59 PM No comments:

The Slawson Periscope Federal Wells Have Been Updated -- April 10, 2020

Look at how incredible the Slawson Periscope Federal wells -- just two or three of them -- the rest are still on conf list.

See this post. That post has not been completed; I hope to complete it later this weekend.

This provides a bit more background to the surge in production that never happened.

The headline is focused on Mexico but the article talks about the deal that was apparently agreed to with or without Mexico and in the end, Mexico agreed to a 100,000-bbl/month cut in production vs the 400,000 bbls that Saudi Arabia was "demanding."

It was a sideshow.

But it was a huge story for Mexico.

By the way, Mexico is not a formal member of OPEC+. Mexico has been invited and regularly attends OPEC+ meetings as an "observer." 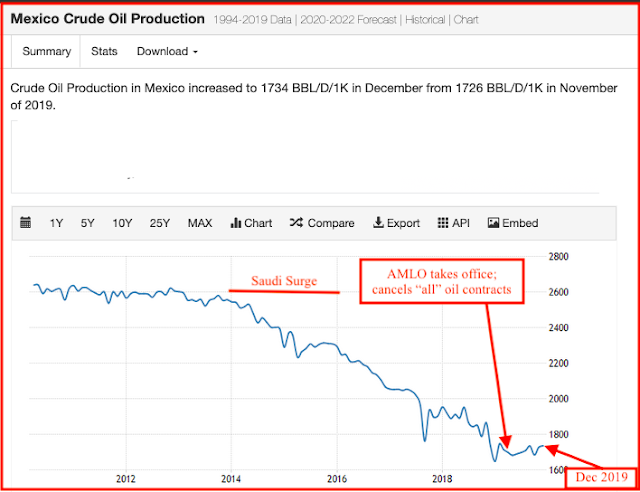 The production surge that never happened. The quota agreement was to end March 31, 2020. OPEC+ had not come to an agreement what to do next. Saudi threatened to open their spigots if Russia did not cut production. Russia blinked first by at least agreeing not to increase production after April 1, 2020, but Saudi said that was not enough and "went ahead with flooding the world with oil." But they never did that by increasing production. They did it by emptying their storage tanks -- putting oil that was in storage, costing them nothing to store it, to placing it in ULCCs / VLCCs for upwards of $50,000/day at highly inflated day rates.

Meanwhile, there was more and more talk that US shale companies were going to fail.

That's the background for this post which was interrupted before it was completed. It's now been completed.

Note: this post is not ready for prime time. It has not been completed. I will complete it later. In a long note like this there will be content and typographical errors. The note, so far, still in progress, has not been proofread.

This was sent to me late last night by a reader (thank you very, very much).

Since there won't be much to talk about for the next three days, I'm curious what readers have to think about the article.

Questions:
But this is what interests me: how folks are "reading" the story.

I often misread things, and the reason I did not comment on it last night after getting the link, I was worn out mentally, and had to take a rest.

I often misread things, and it is very, very likely that I've misread this story also, but here goes.

First: I firmly believe that the Russia-Saudi Arabia fight is about three things:
Folks can disagree me on point #2 above but that's fine.

A week ago, the tea leaves suggested there was no way that Russia and Saudi Arabia would agree to a production cut deal.

Two days ago the EIA released its short-term energy outlook (STEO) stating it was based on prediction that Russia-OPEC would:
In fact,
By the way, even after the cut was announced, WTI trended lower. My first thoughts on that were wrong; now it makes sense why WTI traded lower even after the cuts were announced (more on that later).

So, the big question is why did OPEC and Russia agree so quickly to a production cut. And it was quick:


First, there has been no production surge. The quotas were to end March 31, 2020, and Saudi promised a huge surge as of April 1, 2020. Russia actually cut production during this time period (based on what little I could find on this) and Saudi Arabia simply cleared / cleaned out its storage tanks to store oil in VLCCs and ULCCs offshore, but there was not production surge for export. Remember: the Saudis always increase production in the spring to start preparing for summer domestic requirements (e.g., air conditioning).

Second, the agreement was made within the first week of April. Remember: the quotas / production limitations were to end March 31, 2020, anyway. Like all good political stories, the parties simply waited to the last minute to decide.

Wow, there are so many story lines that come out of this.


The amount of storage capacity that Saudi has is around 200 million bbls of oil (it's probably closer to 150 million bbls than 250 million bbls but the exact number is unimportant). Storage facilities around the world are full. Saudi, even at normal production levels, not to mention a surge i production, was going to out-strip what little storage Saudi had left. It was literally impossible for Saudi to increase production. What were they going to do with all that oil? Dump it in the ocean? There were no more tankers available, and Saudi itself had run out of storage. I assume the very same for Russia. It's clearly a problem here in the states.

So, that's the end of this.

Actually there is more, much more.

At least two more story lines:
Why did Saudi Arabia empty its storage tanks instead of just cutting production. Answer:
their storage tanks were full;
Why didn't they just choke back their wells, shut them in?

A long, long time ago, I believe I recall a reader telling me that -- in fact, I believe Lynn Helms has said the same thing -- there is a risk to shutting in a well. Apparently there is a risk the borehole could collapse. It's hard to find much on the internet on that phenomenon, but here was one source. 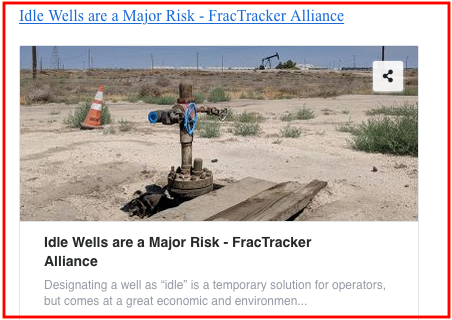 Based on what I've seen in the Bakken, shutting in a well for up to two years is a non-problem for a Bakken well. They generally come back about where they were when they were shut in and many come back much, much stronger. Readers have opined why that is true.

On the other hand, there is talk that the old, old conventional wells in Saudi Arabia are much, much more fragile. I don't know. But the fact that Saudi chose to empty storage tanks instead of choking back / shutting in their wells, speaks volumes.

I'm curious if readers can provide any insight.

But there has to be a reason that Saudis chose to store oil in very, very expensive VLCCs / ULCCs rather than just shut down production.

By the way, I think they were surprised that no one wanted their oil, even at $20/bbl.

A derivative of that, of course, Saudi knew that US shale operators can shut in their wells for up to two years without bad things happening. Saudi knew they could not survive six months on $20 oil, much less two years.

And, finally that brings us to the final question, where we started this whole post?

We go back to that Reuters article linked above.

First of all, I think the Reuters headline was a bit of hysteria, using the word seize, as in "the banks would seize energy assets." It gets your attention and it sounds a lot like what "Venezuelans" would do -- where countries, not banks, seize private property.

Banks aren't going to seize anything. Banks would have to go through a process to take "control" of energy assets (and, oh by the way, there's a lot of "stuff" suggesting that wasn't going to be easy -- on so many levels).

Another interesting point: the Reuters article says the banks were on the hook for $200 billion. Give me a break. $200 billion? If that's even accurate (and I bet it is fairly accurate), that's trivial. Schwab alone has over $3 trillion in assets under management. That $200 billion is spread across many banks and they could slice and dice their risks. Take a look at the "subprime mortgage crisis" that occurred between 2007 and 2010 --

The shale story pales in comparison. In case you missed it: U.S. household net worth declined by nearly $13 trillion. Somehow, a story that US banks are at risk of losing part of $200 billion due to companies going bankrupt seems to be less concerning.

As one goes through this, one almost gets the feeling that Reuters wants to divert our attention from the real problem: the ill-advised shutting down of the entire global economy.

After posting that story about "banks seizing energy assets," a reader sent me this note:


When a bank takes property in lieu of payment on a loan, they have to first write-off the difference between the loan amount and the value of the property received. The property is then held as a classified asset with zero value in making the capitalization test. In other words, the banks really to not want to hold such property on their books any longer than necessary.

If the property taken is an operating business, I can see the bank forming a subsidiary to hold and operate the company, Many reasons, liability restrictions, clarity when explain the balance sheet to the fed and state regulators, etc. That said, I believe the bank will sell the company assets off as quickly as can be done for reasonable value. As has happened in every one of these cycles, the losers will be absorbed by those still standing who will raise capital at the right time to swoop in for the buy.

I really don't think the banks have a long-term desire to be in the oil business.

By the way, after all this happened, the price of oil actually fell quite suddenly even though OPEC+ agreed to 10 million bbls in cuts.

Why did the price of oil fall? Many reasons:

First one: buy on the rumor, sell on the news.

The early rumors were that OPEC+ might cut by as much as 20 million bbls; in fact, their cuts came to 10 million bbls.

That was bad enough, but close reading of the reports that OPEC+ would cut by 10 million bbls suggests nothing of the sort. Close reading suggest that OPEC+ will pretty much produce what they've been producing all along, and in fact, many OPEC+ countries will give lip-service to the agreement.

If the 10-million-bbl cut was really noteworthy, it's unlikely Mexico would have held up the deal over a disagreement whether to cut further. Look at what Saudi Arabia was asking Mexico to do -- that was clearly beyond the pale. As it is, Mexico is going to fail before the US shale sector, but that's  another story for another time.

That's why the price of oil trended downward even after the deal was announced.

EOG to report two monster wells. They come off the confidential list over the four-day Easter weekend, so we won't know the specifics until next Monday or so. But here's what we have so far, and these are huge wells:

Production for these two wells:

These two wells are on an 8-well pad; the other sites are all on loc status.

Neighboring wells, assuming the two wells above run to the north --
Let's check out that meme that daughter wells are significantly worse than parent wells in shale plays. This is the initial production for two earlier wells, one to the east, and one to the west of the new wells:


Wells coming off the confidential list over the next four days --


RBN Energy: no new blog posted.
Posted by Bruce Oksol at 8:01 AM No comments: