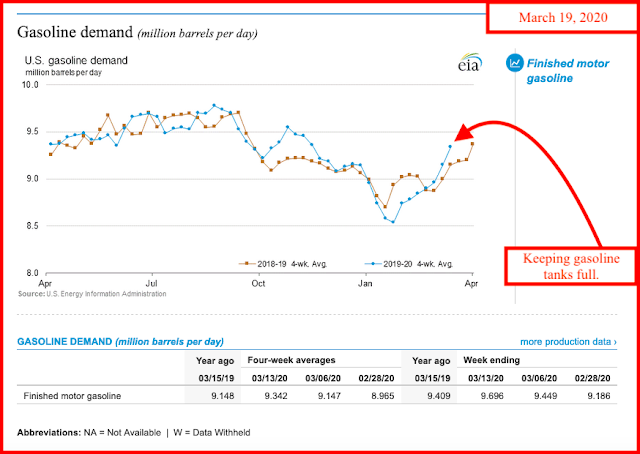 Posted by Bruce Oksol at 8:41 PM No comments: Links to this post

Posted by Bruce Oksol at 6:53 PM No comments: Links to this post 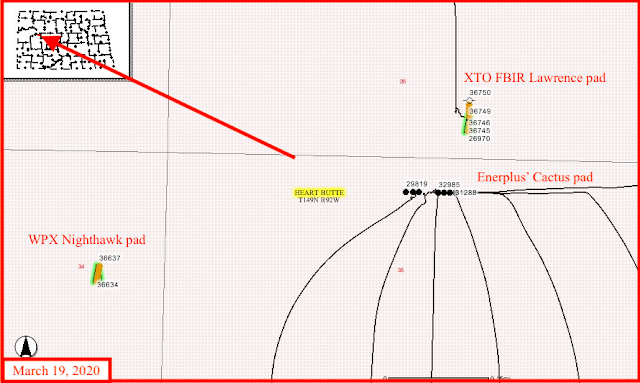 Posted by Bruce Oksol at 6:40 PM No comments: Links to this post

Posted by Bruce Oksol at 5:14 PM No comments: Links to this post

Random notes from the Bakken:

Posted by Bruce Oksol at 3:37 PM No comments: Links to this post

This may or may not mean anything but it got my attention. This well has just come off-line:
Recent production:


Looking at the map, there is a four-well pad of WPX Wolverine wells out to the west in DRL status with a rig-on-site. The wells are:

Posted by Bruce Oksol at 3:27 PM No comments: Links to this post

Coronavirus is officially an epidemic in many countries. Enough countries have declared coronavirus an epidemic that the disease it causes is now called a pandemic.

What is the definition of an epidemic in this country: for seasonal flu if the percentage of deaths attributed to pneumonia and influenza is 7.3% or greater, then by definition it's an epidemic.

I do not recall when "we" last exceeded the threshold for seasonal flu. For the past few months, when I've actually looked at the data (I really was not interested), I noted that the the percentage of deaths due to pneumonia and influenza as reported by the CDC was running pretty consistently, week-in and week-out at 6.9%.

In the most recent CDC weekly flu update, the number has jumped "significantly" (layman's terms) and is now at 7.1%. If it hits 7.3%, it's an epidemic.

Interestingly, for infants and children, it is an epidemic in the US but no one is talking about that. Another eight influenza-associated pediatric deaths occurring during the 2019 - 2020 season were reported this week. The total for the season is 144, which I believe has set a modern day record, and, if not, is coming close.

I assume that eventually we will see more childhood deaths due to coronavirus, but even in Italy, last time I checked, there had been no pediatric deaths.

Later: it never made sense to me why why children have been under-reported with coronavirus compared to adults, but now we're starting to get reports. Youngest is two years old, reported in Ohio: https://www.foxnews.com/health/coronavirus-infects-ohio-2-year-old-the-youngest-in-the-state-to-contract-the-illness-to-date.

Another link between the disease and Italy: Gucci.

A reader sent me this link.


It is also interesting that one of the biggest US sectors outside of nursing homes? Hollywood. And who is more "fashion" than Hollywood?

But again, it's the 300,000 Chinese in northern Italy that probably is the best explanation: purses don't kill people, people carrying Wuhan flu do.

A reader sent me this recipe to take my mind off things, telling me it would cure almost any malady.
Posted by Bruce Oksol at 9:50 AM No comments: Links to this post

Airlines: most of the world's airlines could by bankrupt by May, 2020. I did not read the story or check the source. 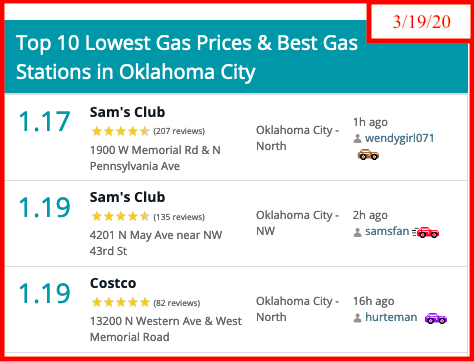 Jobless claims, link here:
We'll have to go back to the Obama-day charts for comparisons. This is bad; not that this was unexpected but that the analysts so misread this. This is quite amazing they were so wrong on the "low" side -- I would have been less surprised had they been wrong on the "high" side. Makes me wonder about their tools?


Well, now we all know how it feels when the bottom falls out. In fact, it seems there is no bottom, with WTI crude at Cushing settling on Wednesday at $20.37/bbl, down $6.58/bbl.

There is no point in belaboring the sad story here.

You can read about pandemics, OPEC price wars and collapsed markets in every periodical on the planet. Likewise, there is no point in trying to predict what will happen next. Any pundit who tries to predict future prices in this environment is picking numbers out of the air at best.

But at RBN, we are energy market analysts. As such, we are compelled to analyze something. And in these market conditions, there is one thing we can hang our hat on: No matter how bad things get, hope springs eternal.

Thus, the market consensus is that things will be better a year from now, and even better a year after that. The implication? In a flash, crude is in steep contango, and that has repercussions for pipeline flows, regional price differentials and for storage — in production areas, at refineries, in VLCCs on the water, and especially at Cushing, OK, the king of oil storage hubs. Today, we examine one aspect of the chaos that now envelopes all aspects of energy markets.

Seventeen days ago — eons in COVID-19 time — we noted that CME/NYMEX WTI Cushing crude oil for April 2020 delivery had closed at $44.76/bbl, a decline of more than $16/bbl, or about 27%, since New Year’s Day. Well, prices have done a lot more free-falling since then. Figure 1 puts the earlier decline and more recent nosedive in historical context, showing daily WTI front-month futures prices since 1998.

Posted by Bruce Oksol at 8:04 AM 2 comments: Links to this post