Not transparent: The Bismarck Tribune used to post, almost daily, on twitter, North Dakota deaths associated with coronavirus. After we began posting "something screwy going on in Fargo," those updates have disappeared. Apparently, the data didn't fit the narrative. The surge in deaths in North Dakota is in Fargo, not in the Bakken. 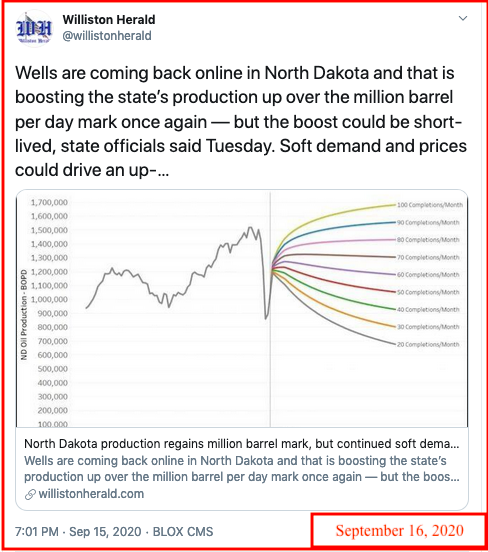 Wells are coming back on line: Williston Herald.

Holy mackerel: analysts expected a reading of 6 -- instead 13.3 points. Link here. And here.

The New York Fed’s Empire State business conditions index rose 13.3 points to 17 in September, the regional Fed bank said Tuesday. Economists had expected a reading of 6, according to a survey by Econoday. The gain reverses a 14 point decline in the prior month. This is the third consecutive positive reading in the index. Any reading above zero indicates improving conditions. The new-orders index climbed 8.8 points to 7.1 in September while shipments rose 7.4 points to 14.1.

Today's retail spending numbers not as good as forecast. Correlates with end of federal "stimulus" checks.

Say what? Bubba Wallace -- after all that support and exposure says he won't be returning to Richard Petty Motorsports -- RPM -- next year (2021). New driver for car 43 not yet announced. Unless I missed it, the article did not say where Bubba was headed. One reader suggested: Uber. If you recall, RPM had offered partial ownership to Bubba Wallace back in August.

The FedEx story is incredible. Expects record-after-record leading up to and through the holiday season. Stock surges.

Facebook: how does Facebook get broken up? This story will pass, too. Jim Cramer has it right. For "small business," best bang for the buck: Facebook.