Focus on fracking: weekly edition posted.  Lede and other data points:
Atmospheric CO2: on May 4, 2020, I noted there was little (no?) association between atmospheric CO2 and human activity.  Over the weekend the same was being reported over at Watts Up With That.

No deal: Total SA backs out of deal to buy OXY assets in Ghana. As recently as May 5, 2020, the deal was still on. 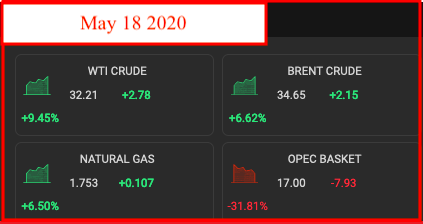 
Back in late March and early April, U.S. refineries responded to the sudden falloff in demand for jet fuel and motor gasoline by quickly ramping down their operations. Similarly, E&Ps in recent weeks have reacted to sharply lower demand for crude oil by slowing — or even suspending — their drilling activity and shutting in wells. Midstream companies’ actions have generally been more muted, though. While many midstreamers have ratcheted back their planned 2020 capital spending plans, the bulk of their major crude oil, natural gas and NGL projects already under construction are staying on-plan. Most of the rest are only being delayed by a few months, and a handful are either being reworked or deferred indefinitely. Today, we consider the midstream sector’s seemingly modest response to the crashes in crude oil prices and demand.