Looks Like Iran Wants To Escalate; It Wasn't Enough To Shoot Down A Commercial Aircraft -- January 12, 2020

Data points, from multiple sources:
WTI: not trading; last trade before the weekend -- closed at $59.04.

Trudeau: news report says he will attend a vigil with those who lost family members in the Ukrainian a/c shoot-down.


All that hand-wringing and depressing articles about Trump's tariffs, global warming, and the effect it had on US farmers?

The U.S. Department of Agriculture said Friday that it expects U.S. farmers to reap 13.69 billion bushels of corn from last year’s crop and 3.56 billion bushels of soybeans. Analysts had expected corn production of around 13.49 billion bushels and soybean production of 3.52 billion bushels.> That is welcome news for farmers who spent 2019 contending with the effects of harsh weather at home and trade disruptions abroad. Record rainfall last spring slowed or prevented many farmers from planting their crops. Cold temperatures and early snowfall last fall stunted some crops and hindered some farmers from getting grain out of their fields. 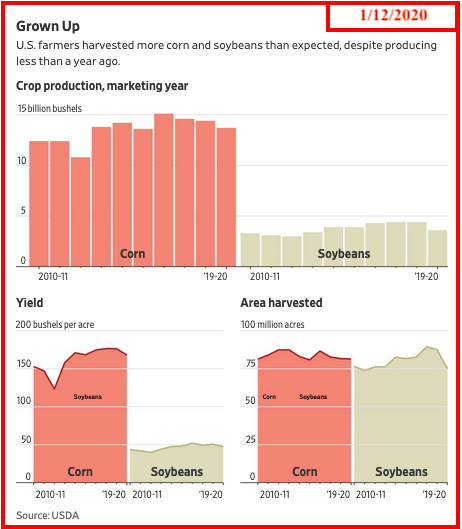 China has pledged to restart purchases of U.S. farm goods, and officials from the two countries are expected to sign an interim trade deal next week. U.S. officials have said China will purchase $40 billion to $50 billion of U.S. farm goods annually for the next two years as part of the deal. That would be much larger than purchases China has made in any previous year. Grain traders say whether those purchases bear out will guide crop prices this year.

Richard Bong: remains, to this day, the Pacific War Ace of Aces. Tommy McGuire was second, only to Bong.

Of the six, only MacDonald survived the war going on to a successful military career.

Three of the six were shot down in aerial combat during the war: McGuire, Kearby, and Lynch.

Bong died flight testing a new fighter jet, in California, on the day the atomic bomb was dropped on Hiroshima.

Johnson died a month later after the Japanese surrender when his B-25 ran into horrid weather over Japan, becoming hopelessly lost and without radio contact. The bailout order was given after the plane ran dangerously low on fuel, but two passengers had not brought their parachutes aboard. Johnson and his co-pilot gave their chutes to the passengers and perished trying to find a place to land.
Posted by Bruce Oksol at 12:08 PM