Love him or hate him, he usually calls it correctly (I could provide a list of "16 calls that Trump got right":).

This time -- remember when he told farmers to go out and buy "bigger" tractors?

Google it: he first said that in October, 2019. Love him or hate him, you have to listen to him.

DE: pulled back a bit last week but still trading near all-time highs. 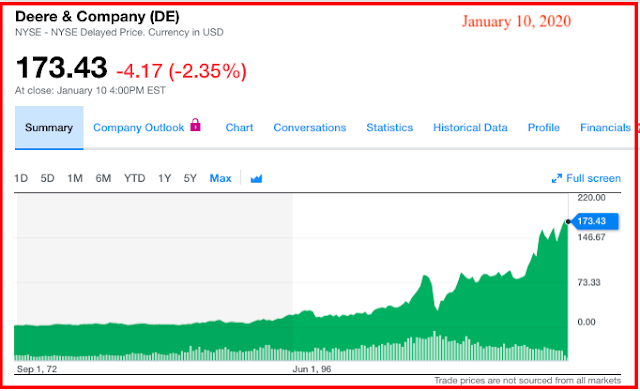 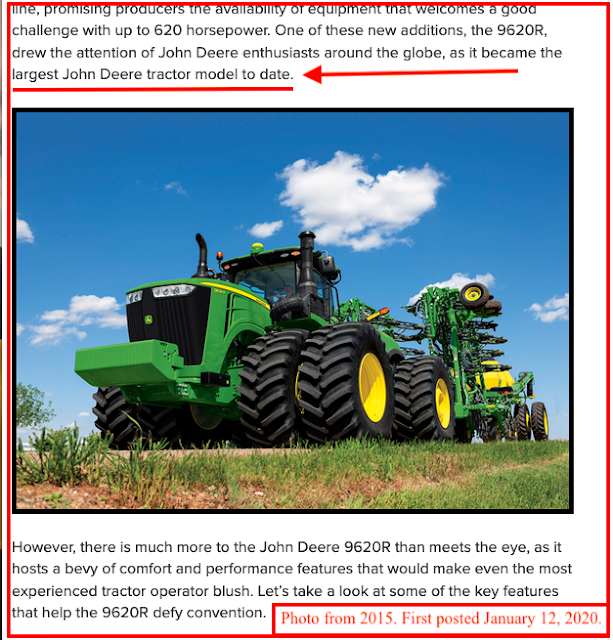 Let's re-post something from an earlier post (this is just a small bit of it), from an article in which The WSJ were going to have a great year after all:

That is welcome news for farmers who spent 2019 contending with the effects of harsh weather at home and trade disruptions abroad. Record rainfall last spring slowed or prevented many farmers from planting their crops. Cold temperatures and early snowfall last fall stunted some crops and hindered some farmers from getting grain out of their fields.

Again, this is from The WSJ in the weekend edition. Note:
That paragraph is a big hard to read, so hopefully I have it correct. If not, it doesn't change the story line.

And from The WSJ:


That is welcome news for farmers.

I don't know if the article said how much money from tariffs that Trump sent to the farmers, but it was a huge amount. Sort of like the money that Obama sent the Iranians.

I like "Sixteen Reasons" by Connie Stevens but "my" personal theme song for Trump:

I Will Follow Him, Little Peggy March
Excuse, it seems I have something in my eye. LOL.

And now the cherry on top:

She became the youngest ever female at barely 15 to have a US No. 1 Hit. She has held onto this title in the Guinness World Records for an incredible 57 years.

To celebrate this iconic song, Peggy went into the studios and recorded a new version complete with a video in honour of her 50 years in show business.

Okay, as long as we've gone this far, we need a song for Nancy. Simply substitute "Nancy" for "Judy" and the chorus: "Articles Of Impeachment, Will Never Come Back To Me." Yeah, I know.


Judy's Turn To Cry, Leslie Gore
If anyone can find a better blog about the Bakken, let me know. The "milliondollarway" is like box of chocolates ... one never knows ...