IPO: ever since it was announced I was highly skeptical the IPO would ever see the light of day (one post here, back on February 19, 2018). The IPO was delayed at the last minute earlier this week and now news is trickling out why that occurred (hint: not enough interest). Today there is a story that Saudi Arabia is issuing $250 billion in bonds to shore up its foreign reserves assets. I was going to post a "tea leaves suggest" that the IPO is not going to happen, or if it does, it's going to be watered down to something very, very small and listed only on some obscure Mideast bourse. But zerohedge beat me to it and probably did a better job than I would have:


Saudi Aramco’s IPO looks doomed to failure as it targets a $2 trillion flotation.

Tepid oil prices, the fraught politics of the Middle East and the demonization of fossil fuel producers in response to climate change fears have all made the initial public offering (IPO) a mission impossible.

The kingdom had looked poised to list up to 2 percent of its shares on its domestic market within weeks. But the long-delayed partial privatization of the world’s largest state-owned oil company now faces another indefinite postponement after the devastating attacks last month on some of its most important facilities at Abqaiq and Khurais in the Eastern Province of Saudi Arabia.

The market, before the opening --
Ex-Div today: 53 (filtered from 80 today entries) -- nothing of interest.

So much is packed into this article, and there's even a tie-in with Fargo, ND, over at wiki:


The HESCO MIL is a modern gabion primarily used for flood control and military fortifications. It is made of a collapsible wire mesh container and heavy duty fabric liner, and used as a temporary to semi-permanent levee or blast wall against explosions or small-arms. It has seen considerable use in Iraq and Afghanistan. It was developed in the late 1980s by a British company of the same name.

Originally designed for use on beaches and marshes for erosion and flood control, the HESCO MIL quickly became a popular security device in the 1990s.

HESCO barriers continue to be used for their original purpose. They were used in 2005 to reinforce levees around New Orleans in the few days between Hurricane Katrina and Hurricane Rita. During the June 2008 Midwest floods 9,000 yd of HESCO barrier wall were shipped to Iowa.

Specifically, the brand name for the barrier is "Concertainer" (a portmanteau of "concertina" and "container"), with HESCO Bastion being the company that produces it.

I was reading The Ancient Celts, Barry Cunliffe, c. 2018, page 329, when the author discusses Caesar's use of the word oppidum, briefly, a large Celtic settlement in Gaul in the middle of the first century BC.

Oppidum was distinguished from:
The author considers oppidum to be a portmanteau word but I don't see that. Latin op might be construed to mean "work/works" such as a settlement, but that's a stretch. And the Latin pid doesn't exist except as a derivation of ped, feet, or similar.

Oppida were not Celtic capitals. There were too many of them to be capitals, although they may have had "regional authority."

There really is no connection between the HESCO MIL and oppidum but simply due to the peculiarities of a google search, the former popped up which then led to gabion.
Posted by Bruce Oksol at 9:05 AM No comments:

With these eleven sites, almost halfway there: 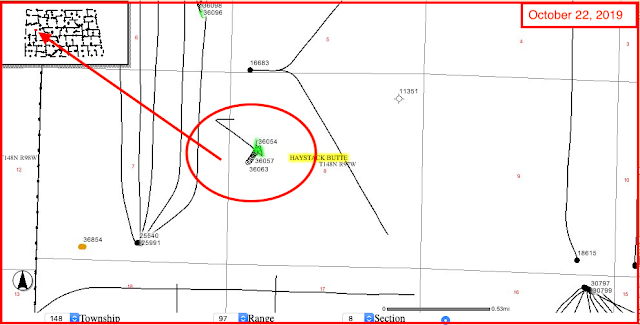 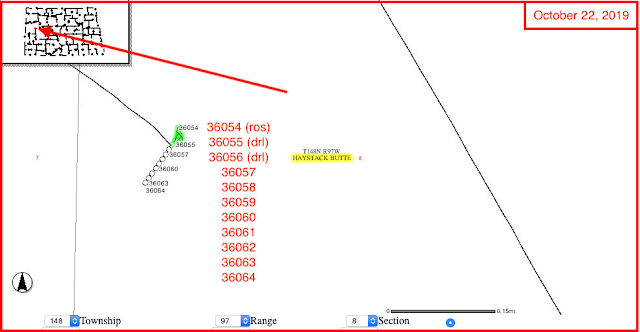 Williston Basin International Airport -- Off To A Great Start -- October 22, 2019

Larger planes to serve XWA soon: from KUMV-TV, both Delta and United will soon replace their 50-seat planes with larger aircraft.
Emplanements up 22 percent in Williston

Subsequent to the linked posts above and a comment from a reader to the first linked post, I received the following from a reader who is much more knowledgeable than I am regarding the shale revolution, particularly with regard to natural gas and the northeast US. From that reader:


The points you raised regarding existing wells/new wells/ wide ranging impacts on company finances are precisely in line with what the new CEO of the country's biggest gas producer has been saying.

A big motivation for Toby Rice to take over the running of EQT was Rice's strident claims (validated by operational data) that a MUCH higher degree of skill was required to juggle SO many interconnected factors in unconventional production.

This has come to pass as wells became closer, product prices hit rock bottom, technological advances - especially in completions - continue apace, capital allocation (and revenue stream) will become "lumpy" as long delays are required to plan/drill/complete/bring to market the hydrocarbons.

You are 100% correct in framing the situation as you have, with the added note being the Bakken operators are somewhat farther along compared to the now-in-the-limelight Permian boys.

I didn't really know much about Toby Rice and EQT. RBN Energy has talked about EQT on many occasions.

So, time to take a look at Mr Rice and EQT.

Unfortunately this is behind a paywall but I'm sure one can find other articles on Rice Energy.


Eighteen months ago, the Rice family was pressured to sell shares in their family gas company at all-time-low prices as the natural gas market tanked.

Now the Rice family is selling again. But this time, it is the entire company, and under much more favorable circumstances. On Monday, rival Appalachian gas producer EQT Corp. said it would buy Rice Energy Inc. for $6.7 billion in a deal that is poised to deliver more than $1 billion to the family, whose members make up much of Rice’s management and control roughly 18% of the company’s shares, according to securities filings.

The merger, which will create one of country’s largest natural gas producers, shows how the shale boom continues to mint great fortunes even after the bounty of oil and gas around the world depressed energy prices.

With gas in particular, timing is everything. Prices for the fuel, which is used in heating and to generate electricity, is prone to wild swings as unpredictable as the weather.

In late 2015, the warmest winter on record pulled down gas futures to all-time, inflation-adjusted lows, dragging down Rice’s stock. To avoid a margin call, the family sold a slug of shares they had borrowed against. Had they been able to hang on to those five million shares, the family would now be nearly $100 million richer.

Under terms of the EQT deal, Rice shareholders are due $5.30 in cash and about one-third of an EQT share. Based on EQT’s closing stock price the day before the deal was announced, that equates to about $27.05 for every Rice share.

Still, the family is likely one of the gas boom’s biggest winners just a decade after Daniel Rice III and his sons created the company from scratch. Their expertise in oil and coal helped them scout land in the early days of the shale-gas boom in Pennsylvania.

Mr. Rice honed his expertise at BlackRock Inc., where he was a mutual-fund manager specializing in energy when his family started the gas company. One early move was a deal to drill in areas controlled by a coal company that Mr. Rice’s BlackRock fund invested in.

Much, much more at the link if one can get to it.

Did the Rice family do the right thing?

Share price of EQT:
Many, many observations but I'm sure everyone has there own observations. But it's an incredible article over at the WSJ on this family. What a great country. Absolutely amazing what an individual can do in this country.
Posted by Bruce Oksol at 6:51 AM No comments:

Perhaps the most interesting "development" coming out of the Bakken yesterday: the 320-acre spacing for these PetroShale wells:

Seven producing wells (DUCs) reported as completed:
I expected this in Clarks Creek, but never expected it in McGregory Buttes. Obviously it was in the monthly dockets but I had completely forgotten.

PetroShale: I finally had to look up the website to make sure I was spelling "PetroShale" correctly.

Back to McGregory Buttes and the graphics. There are very, very few 320-acre units in the Bakken. Also, at this point, none of these 320-acre spacing units are part of any large drilling unit.

In the graphics below, the 320-acre spacing units are shaded in light purple.

Posted by Bruce Oksol at 6:09 AM No comments:


The Western Canadian natural gas market remains a challenging environment from every angle: rising supplies, lack of available pipeline export capacity, and demand that can’t seem to rise fast enough. This has resulted in a price environment which, of late, has become the weakest in North America. The long-term solution to anemic prices and future supply growth is to increase pipeline export capacity from the region and ensure that demand continues to grow. We conclude this series today with a look at how forecasted supply and demand growth will stack up against planned export pipeline capacity additions to determine if the embattled region’s prospects can turn around in the next few years.

Posted by Bruce Oksol at 5:52 AM No comments:

First things first: the EF-3 tornado that hit Dallas Monday night was all over the national news last night. The devastation was much worse than most imagined. There were several tornadoes in that 24-hour period from Texas to Arkansas. This particular tornado followed a major thoroughfare, on a 17-mile track from the southwest to the northeast, covering that length in about 30 minutes. The swath appears to have been about a half-mile wide. A category 4 hurricane has wind speeds of 130 - 156 mph; this tornado, and EF-3, had wind speeds of 140 mph.

EVs: we have a huge new sprawling "outdoor" retail area going up in the area just to the south of where we live -- about five minutes away on my bicycle. Name a  retail outlet and one can probably find it in this area. Generally, the one retail outlet we don't see in these developments is a service station. Interestingly enough, my favorite service station brand just opened this past month: QT. Quick Trip. Least expensive gasoline in the area, generally speaking. Also, largest selection of different coffee choices and huge, huge selection of one's favorite breakfast items and snacks. I'm not seeing new EV charging stations going in. Anywhere. With a Tesla dealership just a few miles to the northwest (in Southlake, TX) this region of the US must have one of the highest concentrations of Teslas per capita -- and to the best of my knowledge, only one Tesla charging station -- about ten units in a parking lot in a shopping mall in Southlake.

Posted by Bruce Oksol at 5:49 AM No comments: