Who owns what: this was published in 2017; since then there may have been some minor changes. Luxury automobiles.

Spotify: I don't "have" Spotify. Our granddaughters do. We have "Alexa." Spotify" is probably the better bet based on what my granddaughters tell me. But if you don't subscribe to a "streaming music service," you have one task tonight: subscribe to something. Truly awesome.


The modernist milieu was small enough to be shaped by the haphazard connections that place an old book in a new reader's hands or bring a bright-eyed editor to an unforgettable lecture. One of the small connections that brought cultural and political individualists together -- and put the first pages of Ulysses in to print -- came in the form of a personal response to an offensive magazine article.

In 1915, Ezra Pound received a letter from a piqued subscriber to The New Age who happened to be a prominent New York art collector.

John Quinn was a finance lawyer with connections to Wall Street, Tammany Hall and Washington, DC. He started his own law firm when he was thirty-six, and he worked tirelessly.

He dictated letters and memoranda to stenographers arranged around his desk in his Nassau Street office, and at the end of the day an assistant would lug a leather briefcase filled with unfinished business to Quinn's apartment overlooking Central Park so he could work through the evening. In the morning, another stenographer would arrive and take dictation while Quinn dressed and shaved.

John Quinn used his clout for modernism. He spent his precious spare time collecting art and manuscripts, sometimes at above-market prices. In 1912, Quinn legally incorporated a group of dissident New York artists who split from the fusty National Academy of Design and helped them secure a space for the most ambitious art show anyone had seen in decades. The exhibition was housed in the new armory of the New York National Guard's 69th Regiment (Quinn liked the fact that the regiment was known as "The Fighting Irish").

They divided up the cavernous space into eighteen rooms, covered the partitions in burlap and squeezed in as many artworks as they could. Next to established masters like Monet and Renoir they hung the work of radical artists like Kandinsky, Matisse, Munch, Duchamp and two young artists who called themselves Cubists, Braque and Picasso.

It became know as the Armory Show, and John Quinn was its biggest single contributor. He loaned seventy-seven artworks from his collection, including a Gauguin, a Van Gogh self-portrait, and of of Cézanne's portraits of his wife. At the unveiling, Quinn declared the show "epoch making in the history of American art ... the most complete art exhibition that has been held in the world during the last quarter century."

It was probably an understatement. The Post-Impressionist show that rocked London in 1910 included fewer than 250 artworks from twenty-five artists. The Armory Show displayed about 1,300 artworks from more than three hundred artists, and its sheer size was enough to grab headlines. Four thousand people saw the show on opening night, and by the time it finished touring Boston and Chicago  (where Matisse and Brancusi were burned in effigy), three hundred thousand people beheld the monumental survey of established and experimental art.

Teddy Roosevelt, John Quinn's friend, said he detected a "lunatic fringe" in the exhibition and worried that the country was being infiltrated by "European extremists."

Nevertheless, the Armory Show marked the New York art world's coming of age, and it changed the American art market forever. Before 1913, Quinn had had somewhat conservative tastes, but the show fired his enthusiasm for more audacious artwork, and his purchases were substantial enough to create a ripple effect in the market. When one Chicago collector heard about Quinn's early buying spree, he rushed to New York and nearly matched his expenditures. In 1914, Quinn bought more art than anyone else in the United States, and he moved to a larger apartment on Central Park West just to store it all (displaying it all was impossible).

As everyone knows, Sophia's closest friend is Corky, a "porky-little pig" stuffed animal. Corky has a long back story; her parents died when Corky was just a baby (Corky is either five or six years old; the age seems to change on a random basis); Corky's parents had lived in Wyoming. Corky's grandparents are still alive and live in Michigan, or maybe Wisconsin, I forget.

Corky goes wherever Sophia goes and heaven forbid Corky gets lost. She was "lost" for several weeks last year, but then miraculously showed up again. Sophia was never worried. She said that Corky often leaves to go traveling, perhaps to visit her grandparents.

For those who have not met Corky, here she is -- in the arms of Sophia with Arianna in the pool: 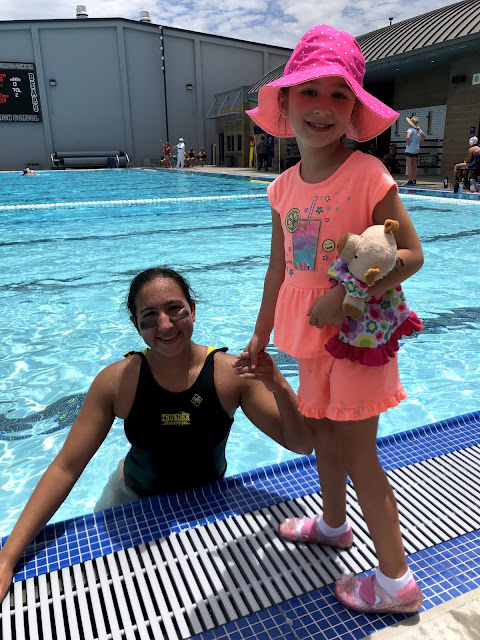 I was reminded of all that when I saw this cartoon: 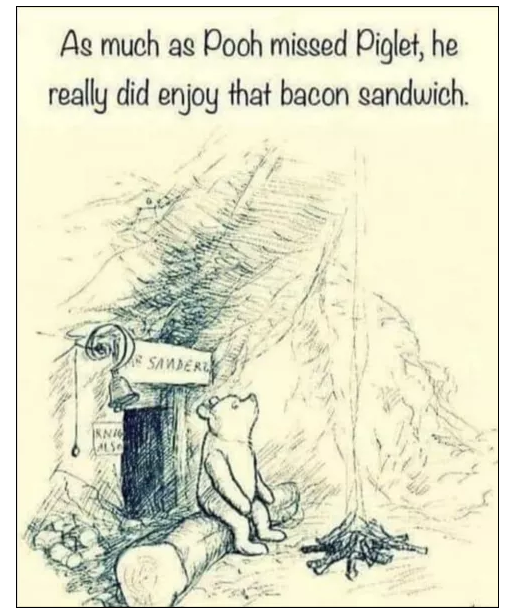 
That’s awful!!! 🤣 Sophia did try giving Corky a piece of bacon at breakfast the other day. But Corky turned up her nose and turned the other way while Sophie enjoyed ALL the bacon 🤣.

Ah, to be a five-year-old again.