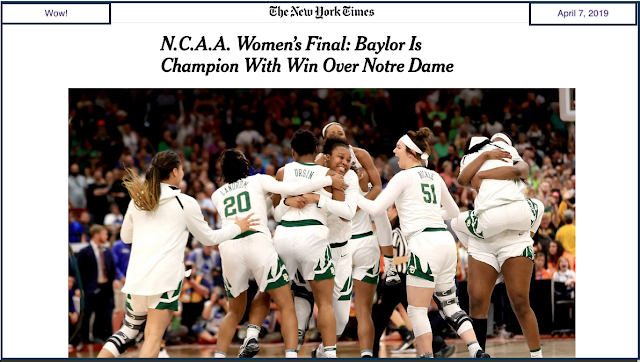 
TAMPA, Fla. -- At this time last year, Chloe Jackson was not on the Baylor women's basketball team. Today, she is its national championship savior and most outstanding player.

Jackson hit a driving layup with 3.9 seconds remaining, lifting Baylor to an 82-81 win over Notre Dame on Sunday night.

Baylor coach Kim Mulkey joins Geno Auriemma and Pat Summitt as the only coaches in women's Division I history with three or more national titles. As the final buzzer sounded, Mul

key broke down in tears as she received a full embrace from her entire staff.

Mulkey and the Lady Bears would not have gotten it without Jackson, who saved her best basketball for the Women's Final Four. Jackson hit a driving layup against Oregon with less than a minute remaining to get Baylor to the national championship game. The graduate transfer from LSU was sensational the entire game against Notre Dame, scoring a team-high 26 points as the key difference maker on both teams.


How does he do it? Kyle Busch just won again. And earlier it looked like he would not win. Hamlin lost a lap due to speeding penalty entering pit.

Involved in a (minor) wreck the first second lap.


The race winner was involved in a multi-car crash on the second lap of the 500-lap affair, sustaining damage to the rear of his car. But he patiently worked his way back through the field. He took his first lead at lap 384.

The key to the win came late – Busch collected his third win of the season in the Monster Energy NASCAR Cup Series and his eighth overall at Bristol Motor Speedway when he chose track position over fresh tires during the 11th and final caution of the race.

I was born very, very early in the boomer generation.

I will start taking RMDs from IRAs soon -- not this year, not next year, but soon. Once we start taking RMDs, we will take RMDs for 26 years. And I'm at the beginning of that bow wave of those taking RMDs; I was among the early boomers.

I will most likely re-invest those RMDs.

But Uncle Sam will start to collect taxes on those RMDs.

We don't hear much talk about that, but my hunch is that by the time the peak of that bow wave hits, let's say ten years from now, the amount of money Uncle Sam collects from taxes on RMDs will not be trivial.

I thought about that (RMDs) when I read the Barron's headline and part of the story: the bull market could last another decade.