January 31, 2019: Elon must have been unhappy with how the earnings call was handled. LOL. From Bloomberg this morning: Tesla's bombshell CFO exit spoils pivot to more sober Musk.


Elon Musk appeared to be putting the days of unpredictability in the rearview mirror. Then he spooked Tesla Inc. investors with another surprise executive exit.

The chief executive officer vowed on an earnings call to cut costs and manage Tesla’s cash as it enters a slower-growth period. Instead of madcap Musk, investors heard from a more measured CEO who had just missed analysts’ estimates for quarterly profit. He even made multiple mentions of the possibility there could be a recession.

But after all the talk of tougher times and tightening the wallet, Musk’s penchant for blindsiding shareholders reemerged. With mere minutes left on the call, he revealed Chief Financial Officer Deepak Ahuja will retire a second time, reinforcing Tesla’s reputation for having an active revolving door of top executives.

The electric-car maker’s shares dropped as much as 2.8 percent shortly after the open of regular trading Thursday.
“The CFO’s surprise retirement just adds to a wave” of recent departures, said Michael Dean, an analyst with Bloomberg Intelligence.

Link here.
See graphics from November 22, 2017 to put the numbers above in some context. Compare the earlier EPS losses with those most recently:
Free cash flow through 2Q18. 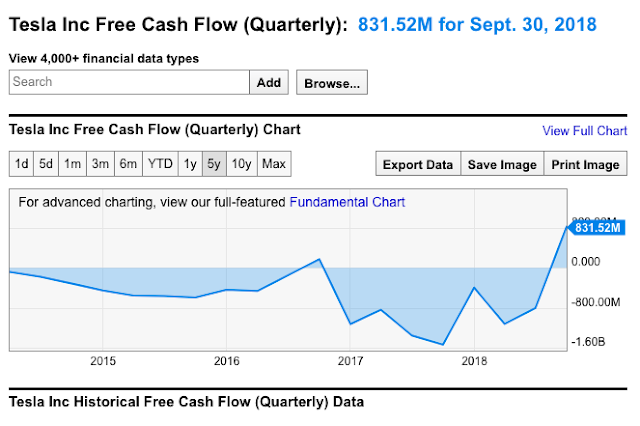 We should know later the free cash flow as of the end of December, 2018, later this evening.

Disclaimer: this is not an investment site. Do not make any investment, financial, job, travel, or relationship decisions based on anything you read here or think you may have read here.
Posted by Bruce Oksol at 4:56 PM