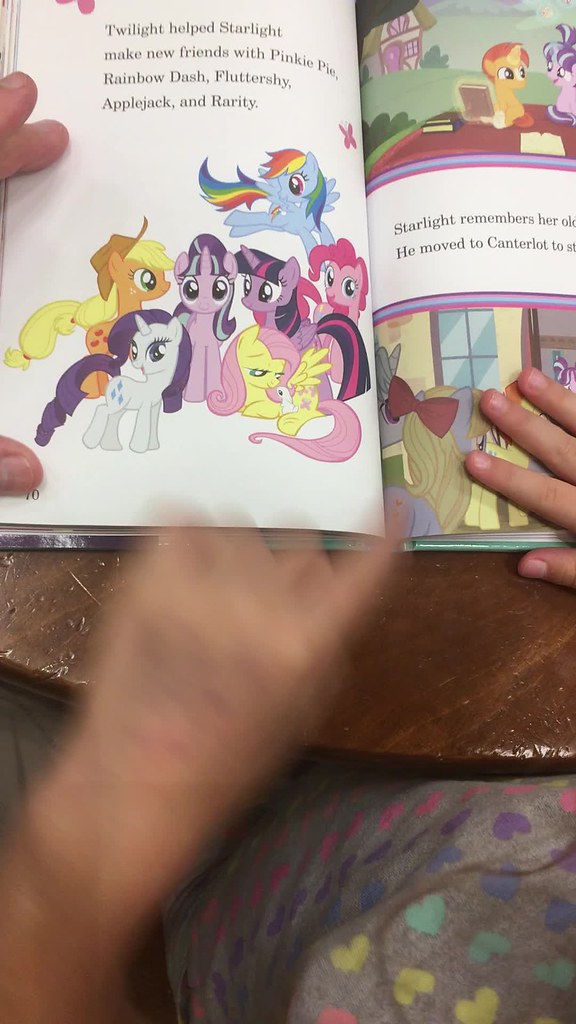 Posted by Bruce Oksol at 10:34 AM No comments: Links to this post

When I first started blogging about the Bakken over a decade ago, I said that if "you had one well," you would eventually have four, maybe eight, possibly twelve, and possibly many more than that." I never even thought about the life cycle of the Bakken well at that time, but that adds a whole new dimension for mineral owners.

Statoil bringing wells back on line that have been off line for up to two years of more. Two examples, so far:
A 14-well pad: 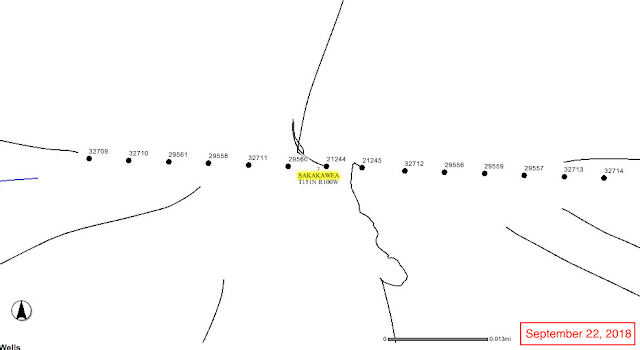 The wells:
One example:


Posted by Bruce Oksol at 9:33 AM No comments: Links to this post

Flashback from 2012 (production data updated, as I always do):

Posted by Bruce Oksol at 9:16 AM No comments: Links to this post

Mark Perry: Another Economist That Does Not Support Free Trade -- September 22, 2018

Re: your blog bit about shopping at Walmart.
In our area, the impact of the tariffs on shopping volumes seems to be…….zero. Nada. On Thursday shopping trip to Wenatchee, Costco, Walmart, Fred Meyers. The stores were packed. Checkout lines full. If the tariffs are having an impact on shopping volume. Thank God. The lines would otherwise be impossible.
Just thought you would like to know.

Another reader noted that milk at Walmart costs less than bottled water.

Of all people, I would have expected Mark Perry to be a "free trader," but apparently he supports: 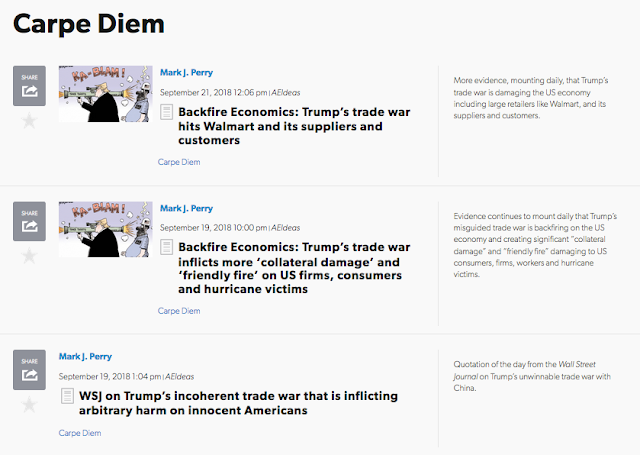 On another note, I have not noticed any price increases of consequence at Walmart. I wonder if Mark shops at Walmart? I can't imagine. "Innocent" Americans ... whatever that means. 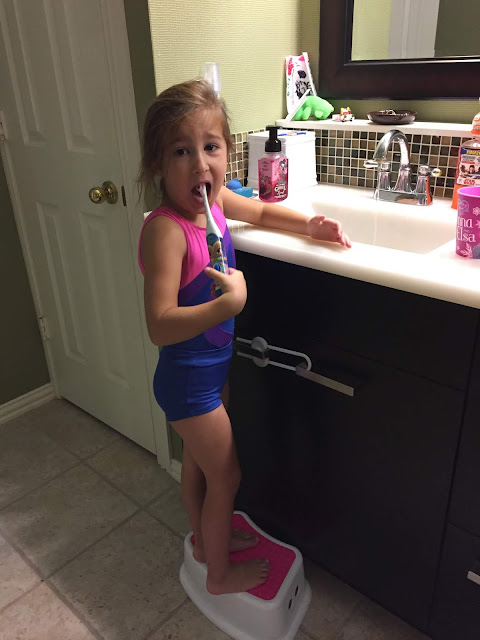 Posted by Bruce Oksol at 8:57 AM No comments: Links to this post

Peak oil? Maybe. Two stories coming out this past week. Russia may be facing peak oil production. Then the second story: Saudi Arabia -- Saudi Arabia worries that it may not be able to supply enough of the "right type" of oil.

The Saudi Arabia story is an interesting story. First, we've talked about this before. I said that if there is a shortage of oil with the Iranian sanctions it will be a shortage of the "right" kind of oil and because the story is too complicated to sort out for most traders, it seems, if the price of the "right oil" increases, it will pull the price of "all" oil higher.

The second reason the Saudi story is interesting: it gives the lie to Saudi's claims that it has inexhaustible spare capacity. Hardly. And look at the current production number: 10.4 million bopd -- that's basically where Saudi has been for years.10.4. And the US: easily at 11 million bopd, link here. I guess the all-time record was set last June at 10.7 million bopd. From Forbes, more recently:


We also know that weekly U.S. crude production has averaged an all-time record 11 million b/d for the past two weeks, a 16% boom since early-January. We've passed Russia to become the largest crude oil producer in the world, yet at over 13 million b/d, we have been the "largest oil producer" for years now. Although a very large one, "crude" is only a subset of "oil."

Indeed, the future shines even brighter for the U.S. oil industry: the International Energy Agency just reported: "the shale sector as a whole is on track to achieve, for the first time in its history, positive free cash flow in 2018." Investments were up 60% last year and are expected to be up another 20-25% in 2018. 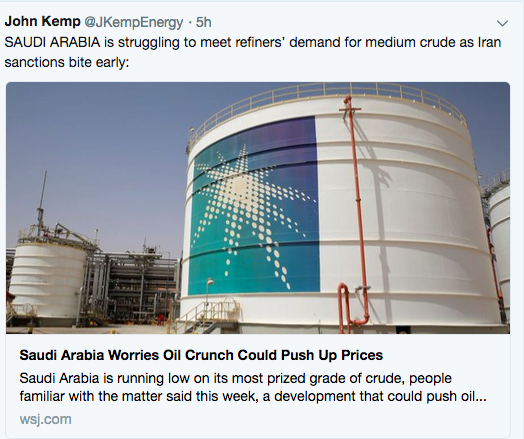 US household net worth: exceeds $100 trillion. Specifically, $107 trillion in 2Q18. But look at this, two quarters earlier, 4Q18: "only 98.7 trillion." I assume we are comparing apples to apples. If we are, that's incredible -- from less than $99 trillion to almost $107 trillion in six months. Inflation has been tame; inflation does not account for this increase. Home values do not account for this increase.

On another note, I guess it depends which movie you are watching, even if both movies are on the same (CNBC) network:
So, what's the story?

The $30 trillion is accurate. But some argue that those with the $30 trillion are living longer and will spend it on themselves. Mostly for healthcare, I assume. And perhaps a trip around the moon. But does it matter whether $30 trillion is spent by the generation that "built it" or their heirs. It's still $30 trillion going into (mostly) the US economy.

Having said that, I attended a Schwab luncheon this past week and the financial advisors are all over this $30 trillion "wealth transfer."

My hunch: US congressmen and women are aware of the $30 trillion and anxious to get their hands on it. Under the next administration, regardless of party, things to watch:
From dqydj.com. I don't know about you, but a jump from $8 million in 2013 to over $10 million in 2016 seems significant. 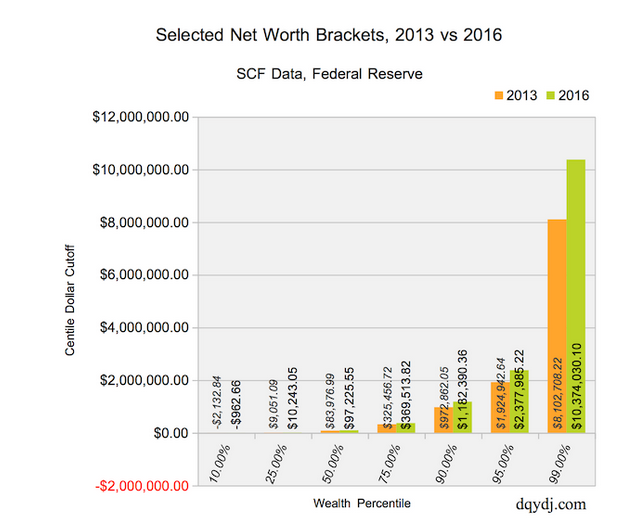 My expectations every time I visit the "north unit": 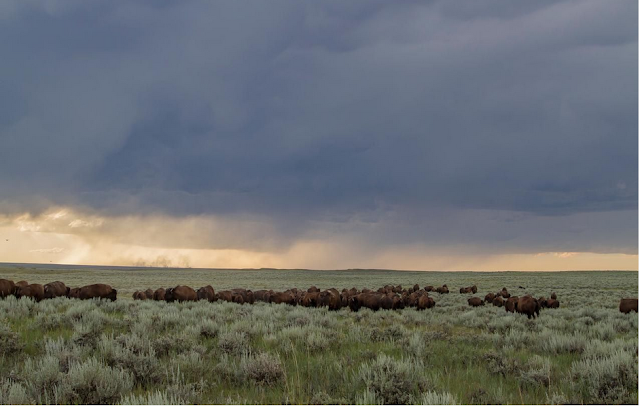 The largest buffalo herd I've seen at the park's "north unit" was about twenty head.

I paged through this book very, very quickly last night at Barnes and Noble. For some inexplicable reason it was shelved near the dinosaur books.

The author used examples from all over the world, and then settled on the idea that the ideal universal basic income (UBI) for the United States would be ..... drum roll ... $1,000 for each adult.

So, we have four 21-year-old milleninals living in a $1,000-rental unit with untaxed income of $48,000 / year. And legalized marijuana. What could possibly go wrong?

Of course, those on UBI would get free healthcare, so the UBI will be significantly "more valuable" than $1,000 / month.

Whether the writer addressed the issue of cost of living in NYC vs Jamestown, ND, I don't know, but I doubt it. 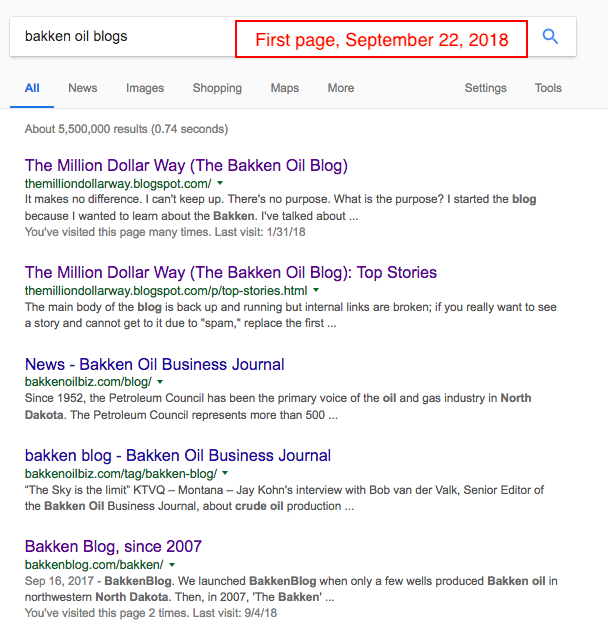 International
TransMountain: Canada orders new environmental impact study; study due in 22 weeks (one-half year); then a half-year to debate; and then back in court
KMI to sell all Canadian assets; Canada is closed to new business;
Peak oil? Perhaps in Russia

Bakken 2.5
Eighteen new permits -- including a QEP 12-well pad -- and MRO reports six incredible DUCs
One example of many: an XTO Fenton Federal will with high jump in production
North Dakota flaring getting worse

Operations
EOG fracking in the Parshall; and, here; and, here;
EOG's monster wells in Clarks Creek
Coming out of nowhere: Oasis now the 4th largest producer in North Dakota
Life-cycle of a Bakken well
Bear Creek moves to the top of the list: crude oil production / well; and, here;
Update on MRO's Lars well
Update on CLR's Buelingo

Miscellaneous
Final Missouri River Study to be released next week

Commentary
The dreaded Bakken decline; and here;
Why the EU advocated for renewable energy; they had little choice
MRO likely to be names "North Dakota's operator of the year"; and, here;
Filloon on MRO
MRO corporate update
Posted by Bruce Oksol at 7:16 AM No comments: Links to this post