US Crude Oil Production Drops Two Weeks In A Row After Hitting A Record High -- August 13 , 2018

After hitting a record crude oil production of 11 million bbls/day a few weeks ago, I had not really paid much attention to recent data.

A reader noted that during the past two consecutive weeks, US crude oil production has dropped. It's a bit irritating that the EIA starting rounding this data a few months ago, but it is what it. After hitting 11 million bopd, US crude oil production dropped by 100,000 bopd the next week (to 10.9 million bbls) and then dropped another 100,000 bodp in the most recent reporting period to 10.8 million bbls. 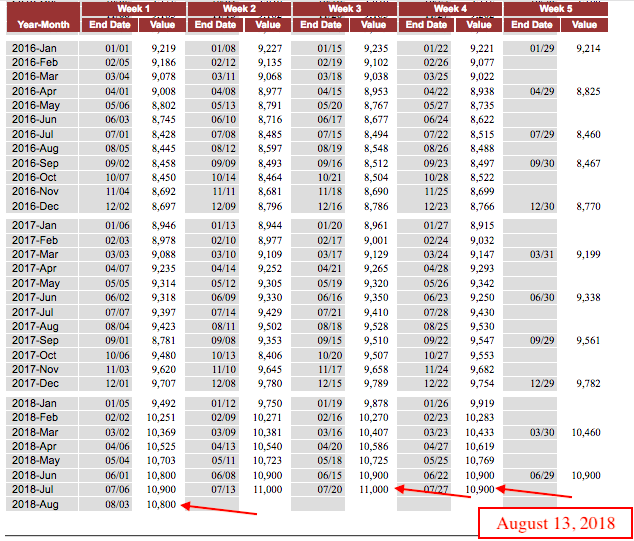 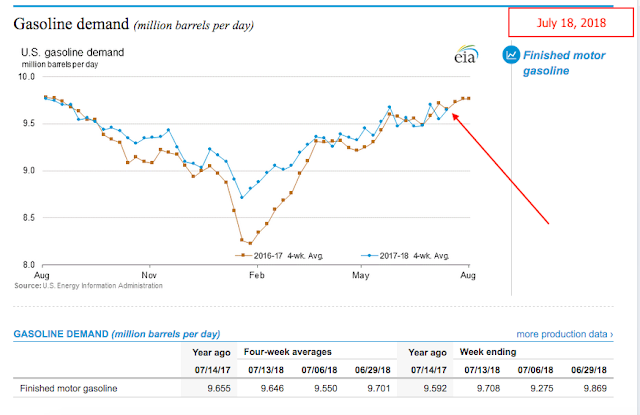 For the past several weeks, the #1 story coming out of the US oil patch is the Permian takeaway story: and that story is pretty "bad." I assume about a month ago, publicly traded companies starting putting together their quarterly reports together. A number of Permian operators are cutting back. Most notable, to me, was the announcement that COP was "existing" the Permian for the time being, and that during the earnings call seemed to have to explain why why still had rigs there (to keep their leases).

See this post on Noble and its challenges in the Permian; will shift well completions from the Permian Basin to their other oil assets , August 6, 2018.

COP temporarily exits the Permian; will focus on the Eagle Ford/Bakken, Juy 5, 2018.

Bottom line: all that to say this -- the drop in US crude oil production probably reflects the reality of takeaway capacity in the Permian, and how operators there are responding. I assume after August 15, 2018, when the NDIC reports monthly production, we may see some stories on production coming out of the various shale pales in the US.

Email ThisBlogThis!Share to TwitterShare to FacebookShare to Pinterest
Labels: Production_US

It seems the preponderance of energy headlines for the past two weeks has been that the oil situation will get tighter, and by implication, the price of oil will rise.

But here we are, after another week and another weekend in which movers and shakers tried to talk up the price of oil, WTI has fallen 2.4%, has dropped $1.62 since this morning, and is now trading at barely above $66.

Both Goldman Sachs and the IEA have talked of oil prices going higher by the end of the year.

What do you do when you:
You do something that tells the world that you:
You buy Tesla. Not just 5% of the company but the entire company.

And Erdogan knows Russia doesn't have the rubles to bail him out.
Posted by Bruce Oksol at 12:01 PM No comments:

Frackers burn cash to sustain US oil boom: from The WSJ.  Sub-heading -- many U.S. drillers have increased spending, but not production forecasts, pointing to possible slowdown. I


Two-thirds of U.S. oil producers failed to live within their means in the second quarter, even as oil rose above $70 a barrel. Collectively, 50 major U.S. oil companies reported in their second-quarter results that they have spent $2 billion more than they took in.

Pioneer Natural Resources Co. , one of the biggest operators in the Permian Basin of West Texas and New Mexico, told investors a year ago it expected to largely make up for rising operating costs with “efficiency gains” such as producing more from each well. Last week , Pioneer reversed course and raised its annual spending forecast to $3.3 to $3.4 billion, from $2.9 billion, to produce roughly the same amount of oil.

“We’ve had a more significant increase in cost issue than we would have assumed,” Pioneer Chief Executive Tim Dove told investors. Some of the new spending will push up output next year.

[Where the rigs are going: see below.]

In his comments, Stuart Baxter pretty much summarizes my sentiment regarding the article:

What a stupid article.  I expect to lose a bunch tomorrow because of these witless journalists who thinks they have a clue.  What are they trying to accomplish with this trash?

But, look at this: forget about the verbiage in the article -- look at the graph that was embedded in that article linked above -- look at that incredible fall from $70 - $100 all the way down to $35 in the Bakken -- what did the writer expect? That the break-even price would drop to zero dollars? Wow, another doofus. This graphic is incredible: 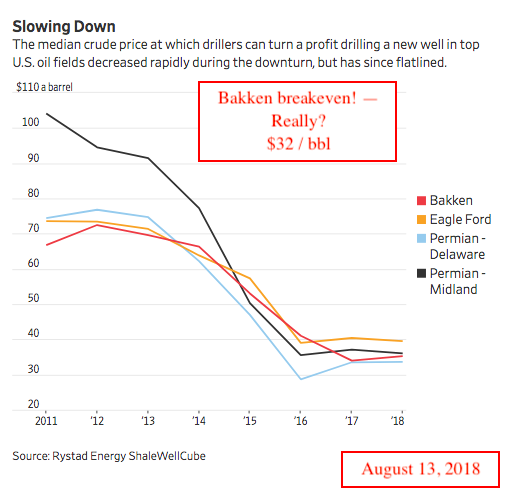 Turkey: imploding ... from Argus -- A total of six Turkish gas-fired power plants with a combined capacity of 5.3GW have stopped generation, as a result of the domestic currency's record-low against the US dollar.

Trucking: wow, how many times have we talked about this in the blog in the past year? Trucking's tight capacity squeezes US businesses. From The WSJ.


Empty trucks are so hard to come by right now that Dean Foods Co., one of North America’s largest milk suppliers, cut its full-year earnings outlook in part because it simply can’t move its goods for anything close to what it expected to pay this year.

“Industry capacity for truck drivers remains extremely tight. This is driving third-party hauling rates to record levels, up 26% versus prior year,” Chief Executive Ralph Scozzafava said in a Tuesday call with investors.

The warning from the Dallas-based dairy processor puts Dean in a growing line of U.S. businesses struggling with the tightest freight market in recent memory. Distribution channels that carry goods to retailers, factories and consumers are struggling to keep up with the fast-growing U.S. economy as more companies caution that the strains in the transport sector are holding back their ability to grow.

Director's Cut is scheduled to be released Wednesday, August 15, 2018.


RBN Energy: CITCO's future in the wake of a key US court ruling. 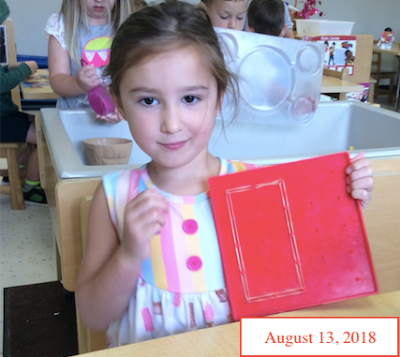