I have no clue how to read these charts, but back on June 28, 2018, John Kemp posted this over at Twitter saying that WTI is "in steep backwardation": 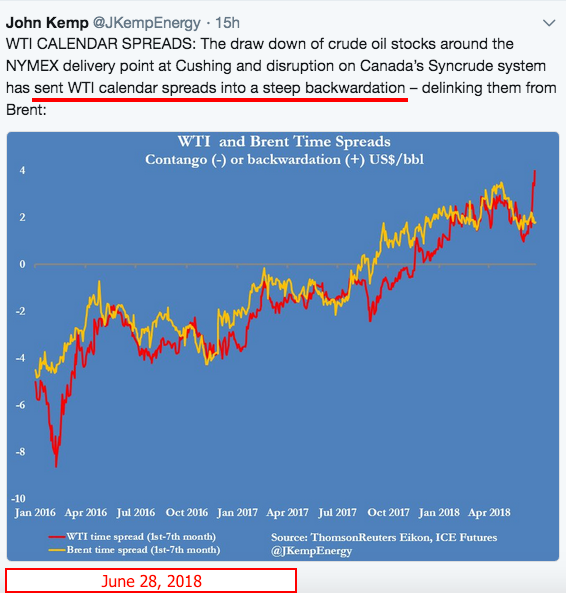 Severe backwardation: prices of WTI to be going down going forward.

Now this from oilprice today.


Those hedges were likely secured last year, when oil traded at lower levels. The shale companies locked in those positions as a risk management strategy, guarding against the possibility of a meltdown in prices. If the economy had crashed or OPEC decided to flood the market once again for some reason, and oil prices fell back below $50 per barrel this year, those companies would have been protected.

As it happened, however, prices surged in the first half of this year.

WTI surpassed $70 per barrel in the second quarter, rising to its highest point in more than three years.

Some shale drillers were stuck selling their oil for prices in the mid-$50s. Anadarko said that it missed out on nearly $300 million in pre-tax revenue because it was locked into hedges.

Posted by Bruce Oksol at 9:42 PM No comments: 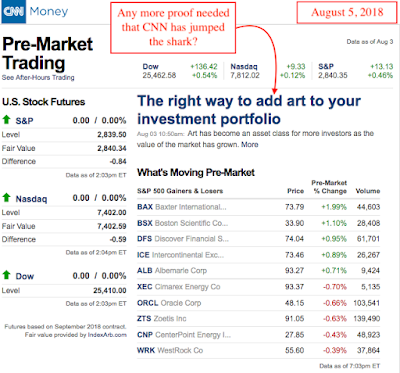 Another great well that appears not to have been refracked.
Selected production data: 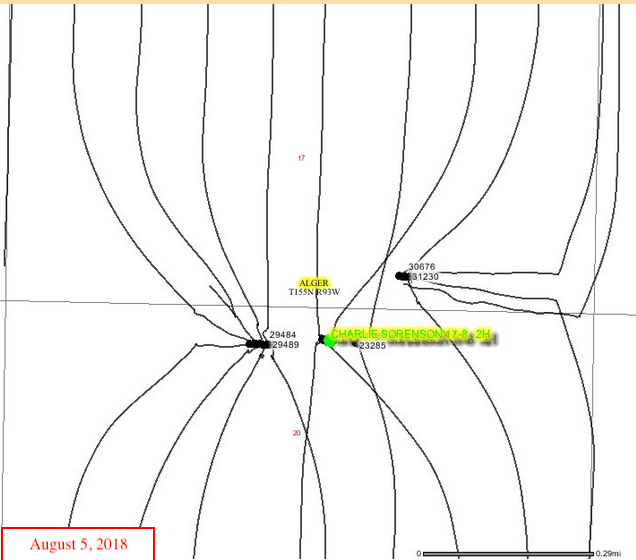 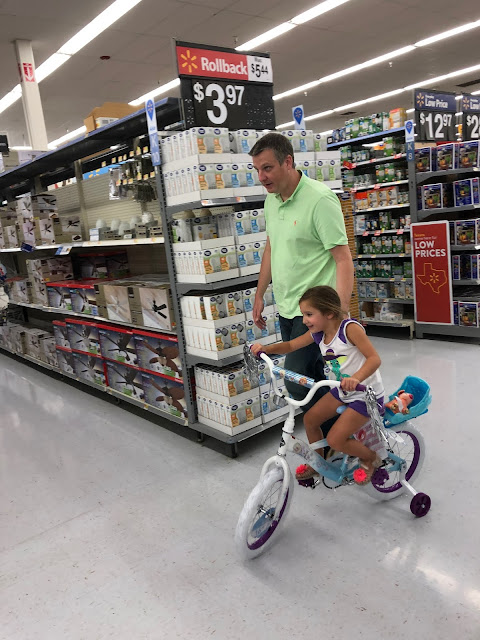 This neighboring well has not been re-fracked:

Repeating, this well was taken off-line 9/17:
The neighboring MRO 3XXXX wells in the section to the east have not yet been fracked according to FracFocus -- no data yet.

The neighboring wells farther west were more recently fracked and explain #16778 above.
Posted by Bruce Oksol at 4:30 PM No comments:

Random Look At Airport And Lougheed Wells On North Side Of Williston -- August 5, 2018

This should be interest to all Willistonites. This well has not been re-fracked:
The graphics: 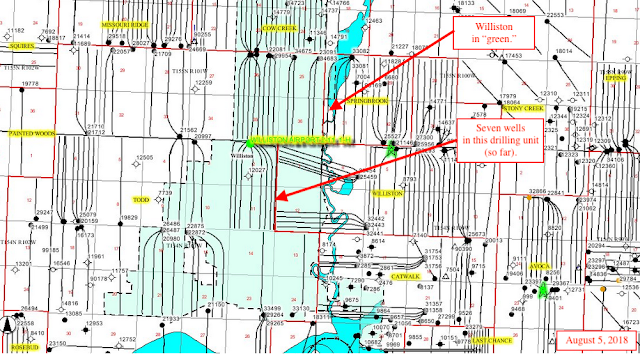 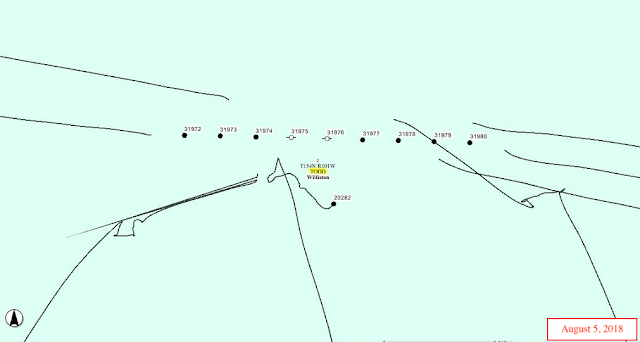 Off The Net -- Biking Home -- Then NASCAR

Later, 3:01 p.m. CDT: This may be the most fascinating non-energy western North Dakota story so far this year. Over at The Bismarck Tribune.


The Bureau of Land Management is seeking public input on what action to take after a Dunn County rancher built a bridge across the Little Missouri River that the agency says trespasses on public land.

The east end of the single-lane bridge northwest of Killdeer is on land owned by rancher Wylie Bice. But the west end of the bridge is on an isolated 76-acre tract of land managed by the BLM.

In addition, the BLM says an unpaved access road, a water settling pond and portions of two alfalfa fields are on public lands without permission. In all, nearly 13 acres of public land are affected.

One has to read deep into the article learn that this bridge was built in 2013, sustained some damage in 2014 due to flooding/high waters, but was repaired and raise.

All the rancher's own expense.

I forgot my safari hat -- it's going to be a hot bike ride home.

Something to get me ready for the bike ride:


Yes, Sir, I Can Boogie, Baccara

Wow, there's a lot of good stuff on the blog today. Enjoy.

Oh, one last look, what's going on at oilprice and Yahoo!Finance? 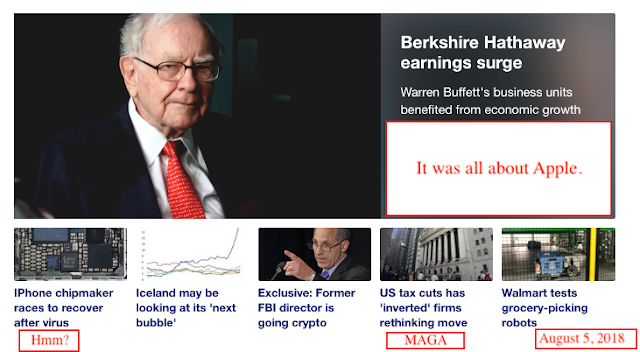 I have no idea how well Tiger Woods is playing relative to his history.

I do know that the PGA and the networks hope that Tiger Woods continues to play well enough to keep making the cuts.

First stage: first stage just completed. Joey Logano, who finished at the same race track yesterday, crashed and DNF'd -- only the second time he has finished dead last while racing for NASCAR.

Later: I am really, really thrilled for Chase Elliott. Good for him.


If I had all the money in the world, I would be at Fenway Park tonight watching the New York Yankess playing the Boston Red Sox. But I don't and I'm not.

February 25, 2019: more of these wells are coming off the confidential list.

Most recent:
I believe the chronological number is 31. I could be wrong.


Cat's in the Cradle, Henry Chapin
**********************************
A Note To The Granddaughters
I received a nice note from a reader who sent me photos and comments about attending a donnieandmarieosmond concert in Las Vegas. It was a very, very good note and brought back a lot of memories. Perhaps out of context this note won't make sense, but this was my reply, unedited, and not ready for prime time:

1. When I saw the first photo of the gentleman with Marie Osborn, I thought that Donnie had really changed. LOL.

2. You and your wife really get around; good for you.

3. I've gone to very few live shows in Las Vegas -- and that was decades ago. They really put on incredible shows out there. When I went decades ago, the shows were much less expensive, much more intimate, and a lot less commercial (of course, I'm quite naive) but now, I no can longer handle crowds, so I don't go to shows. I was spoiled by my last years in the USAF when as a commander, I always had reserved seats and escorts to take me where I needed to go.

4. Interestingly, I am less interested in live shows these days, and much more interested in the back story. Thus, one reason why I find three movies/television series so compelling: Mulholland Drive, Twin Peaks, and Birdman (The Unexpected Virtue of Ignorance).

5. I was assigned to the premier fighter squadron in the USAF at the time "Top Gun" came out. The fighter pilots talked a lot about the movie. They might not admit it, but USAF pilots do have great respect for US Navy pilots. There is no question in my mind the gap between a US Navy pilot and a USAF pilot.

6. I took my dad to see "Top Gun" figuring it was the best way to let him know of my experiences with the fighter squadron, the 22nd Tactical Fighter Squadron, an F-15 squadron, Bitburg (Germany) Air Base. 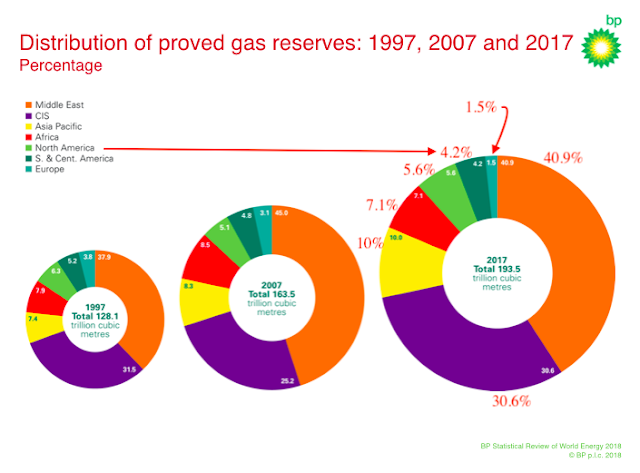