It would be crazy to make any conclusions based on a single month of data, but this is quite staggering. 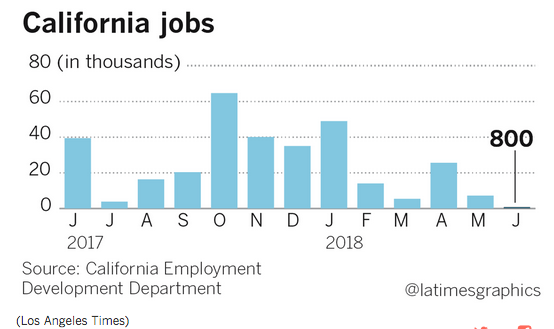 
Note: the oilprice.com reports WTI at $68.11; the crawler at CNBC says WTI closed at a bit over $70 (perhaps different contracts)


It’s been a stifling summer of disappointment for investors in the UK’s wind farms, which a heatwave has put at a standstill that’s seen a major drop in power generation eat away at millions of pounds in profits.

The dismal numbers from the company’s first fiscal quarter indicated to investors that the full-year results may also take a hit, prompting share prices to plunge more than percent to £13.50 on Thursday.

I just posted an entry in which all agree: renewable energy is one of the least efficient ways to go about replacing coal consumption in a short period of time.

The article did not say what the least efficient way to go. Most likely that's nuclear power. It takes ten years to get the permits, and then another ten years to build the damn thing. Assuming all goes well.

So, here we have a most interesting story.

Apparently, those living in the United Kingdom are learning that:


a) the wind doesn't blow all the time (except over Menwith Hill);
b) wind power is not dispatchable; and,
c) their Kingdom does not have a good answer for energy when the wind quits blowing

Here's the story. Huge thanks to Don; I would have missed it.
So, the Kingdom's answer? I can't make this up:
Great graphics, by the way, as usual, at the linked Bloomberg article.

By the way, one more thing: this wind-thing won't happen during the winter. Had it happened during the winter it would be a catastrophe for England. In the summer, not so bad. Just higher prices.

Politics: wow, I love this president. The first one since Teddy Roosevelt, I think, who actually seems to be very, very comfortable "in his skin," as they say. He doesn't seem to have a need to have speech writers write everything for him. He remains spontaneous, speaks his mind, gives folks "something to talk about." Never a dull moment. I don't know. It seems better that we have the leaders of the two countries with the largest nuclear arsenals to actually be talking face-to-face. Sometimes I think folks have forgotten the Cold War of the 1950s. Just rambling. 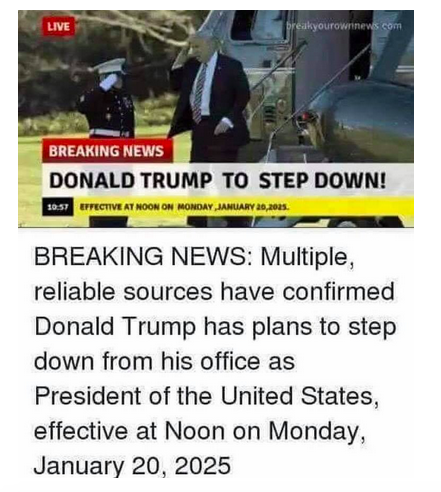 Natural gas. I don't know what others are thinking, but I think this graphic is incredibly remarkable. If this was under a different administration and/or if it was a snapshot taken a decade ago, one would think the problem is lack of production, but today, the US has record amounts of production, and record amount of reserves, and yet, the EIA forecasts the natural gas "injection" will hit a new low this autumn. Absolutely amazing. Maybe I'm missing something. Maybe it's that third potline that Alcoa will be re-starting later this summer. I don't know. Just rambling. 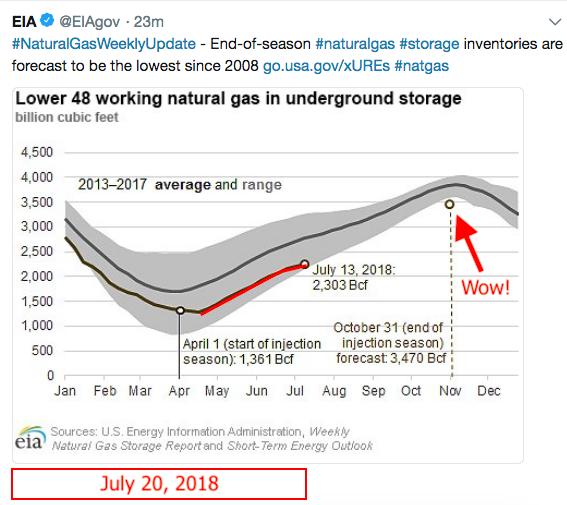 Thought experiment: one of the things I enjoy most when driving the granddaughters to various events, is to try to "step out of my body," and look at the world from a distance, our "place in the universe" as it were. I find it absolutely remarkable all the life forms and all the color compared to the rest of the universe. There seems to be a huge jump from what we see on Mars or Venus or Pluto to what we see on earth. And there doesn't seem to be any examples of anything "in between." It's almost an "all or nothing" phenomenon.
Posted by Bruce Oksol at 9:03 AM 4 comments: 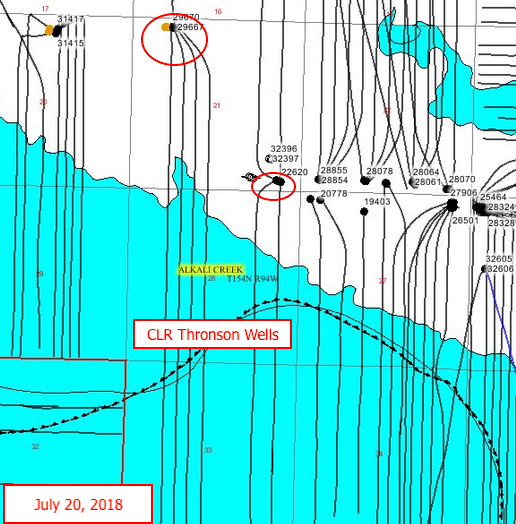 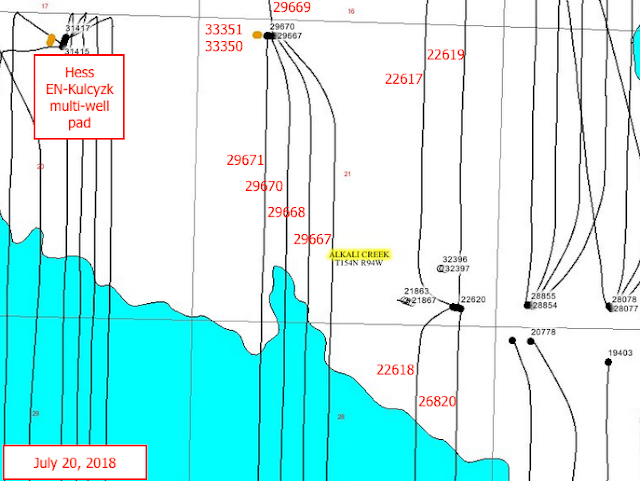 New Jersey: on July 1, 2018 -- less than three weeks ago -- it was reported that New Jersey was going to rely on internet "on-line" sales tax to make up a huge budget deficit. Hold that thought. LOL.

Do you know who's not worried about the trade war? The chairman of the Federal Reserve.


Two data points: his testimony suggests he feel the economy is accelerating; and, his testimony suggests there it is not likely that planned interest rates will not be taken off the table, confirming that he thinks the Fed needs to "cool the economy." Unless he did not get the memo on tariffs and the trade war, one would think the Fed would consider that before raising rates. And as long as the Fed feels comfortable raising rates, that tells me they're not worried about the trade war.

Wow, look at all the wells coming off the confidential list today (reporting these may be delayed: family commitments from now until 9:30 a.m.):


Despite intensifying competition from U.S. natural gas producers — or because of it — Western Canadian gas producers are ramping up their long-term commitments for intra-basin takeaway capacity from the Montney Shale, as well as for capacity at both intra-provincial and export delivery points. Not only has there been a slew of new project announcements in the region, but in some cases, commitments reportedly have exceeded proposed capacity during open seasons. Today, we provide an update of gas pipeline expansion projects in Western Canada.

We’ve talked quite a bit in recent months about the worsening gas supply congestion along U.S.-Canadian border regions, which is heating up the competition between U.S. and Canadian natural gas producers. Natural gas production growth on both sides of the border has been outpacing demand growth.

Western Canadian producers have been contending with gas transportation constraints right where production is growing the most, in northwestern Alberta and eastern British Columbia (BC). Last fall, the Alberta gas market experienced extreme bottlenecks that left production stranded and sent area gas prices spiraling to negative territory. The ramp-up of winter heating demand helped ease the constraints, but the negative pricing briefly returned this past spring.

Part of the problem is that production growth is increasingly concentrated in the eastern BC and northwestern Alberta areas of the Montney, and pipeline gathering and takeaway capacity has been playing catch-up, especially as plans for LNG exports from the region have faced continual delays or have gotten derailed entirely. The other factor is that while intra-provincial demand is also growing — from gas-fired power generation and oil sands projects — the connectivity between the supply and delivery areas has lagged as well. Over the past few years, regional pipeline operators have responded with expansion plans to debottleneck the supply areas and connect producers to downstream markets. These expansions will shape how Canadian producers navigate the increasingly competitive North American gas market over the next few years. So, next, we take a closer look at recently built and planned projects.

Tonight I see the city of Burnaby ordered the eviction of the Trans Mountain pipeline protest camp. The city says Camp Cloud has violated multiple bylaws; protesters have no plans to leave. Those living in the camp have 72 hours to close it down, or the city will do it for them.
Posted by Bruce Oksol at 12:46 AM No comments: