Link here.
EIA data will be out tomorrow about 10:30 a.m.
Posted by Bruce Oksol at 8:02 PM No comments: Links to this post 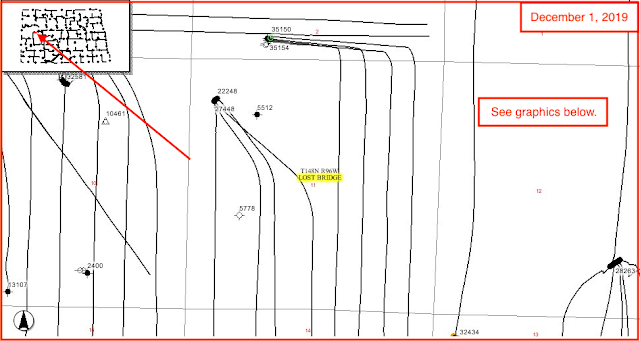 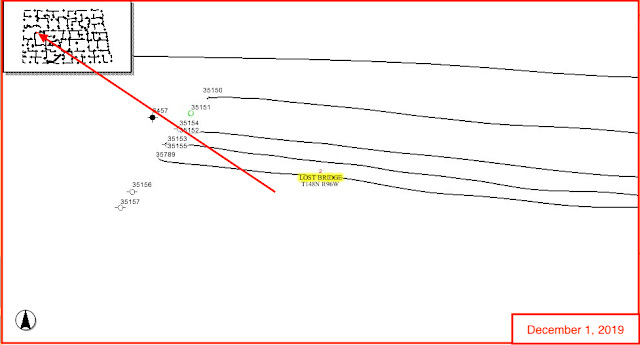 Permits issued July 17, 2018. I believe the wells will run from the north to the south, a stand-up 1280 with an overlapping 2560-acre well or two or three -- just a hunch. The wells are already on the confidential list. 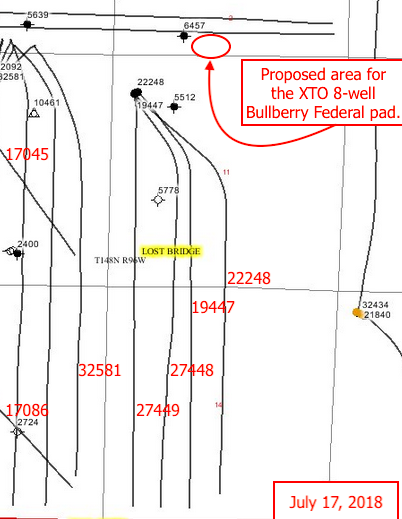 Posted by Bruce Oksol at 7:35 PM No comments: Links to this post

Posted by Bruce Oksol at 5:33 PM No comments: Links to this post

Lost in translation. I assume I'm among the many who are happy with the new Fed chairperson, now that the Fed has become more transparent. From CNBC today, the Federal Reserve Chairman Jerome Powell clarified his views on the economy:

So, the economy is either going to fall off a cliff, or to continue growing. Okay.

And knowing the risk of the economy falling off a cliff is about the same likelihood as the economy growing faster, the chairperson says the Fed will continue to raise rates, maybe even more than previously anticipated.

The former chairperson, .... quickly, does anyone remember his/her name? -- Janet Yellen, was so much less transparent.
Posted by Bruce Oksol at 12:51 PM No comments: Links to this post

I never did "finish" this (see earlier post). Better late than never, I suppose.

We are now well into our third calendar quarter and in a month or two we will get taxable sales data for the second quarter.

In anticipation of that data, here are the numbers for select cities and counties for the first calendar quarter, 2018.

Posted by Bruce Oksol at 10:21 AM No comments: Links to this post

About that soaring price of gasoline? It's falling fast. Down to $2.52 here in north Texas. Possibly slightly lower in some areas. Higher along the major highways.

Wow -- UH-Haul maxed out! On way into work today, I noted that the U-Haul Rental lot was completely full of trucks. Absolutely full. I've never this lot so full. Reminds me of the Bakken boom when the U-Haul Rental lot in Williston was overwhelmed by all the trucks and trailers pulling into Williston. There is a boom going on in west Texas (Midland/Odessa); north central Texas (north of DFW airport); along the I-35 corridor between/including Austin to San Antonio; and east Texas (Houston/Galveston).

he second-quarter profit reached $1.37 per share compared with 88 cents per share, or $97.9 million, in the same quarter a year ago. Analysts polled by Thomson Reuters estimated J.B. Hunt would earn $1.28 a share for the quarter.

Disclaimer: this is not an investment site. Do not make any investment, financial, job, trucking, travel, or relationship decisions based on what you read here or think you may have read here.

Coyote blog: if you haven't visited the Coyote blog in a long time, highly recommend visiting the site and simply scroll down through the past few pages of postings. A very, very good blog.

Tesla: if you don't have time to scroll through the Coyote blog, at least take a look at this post regarding Tesla. It was posted about a month ago. We discussed it on this blog a few days ago. At least we know where Tesla shipped the "missing" cars.

Libya: apparently not that big a deal. LOL. Brent falls 4% to 3-month low after supply concerns ease. LOL. Saudi said it could make up the difference; Russia said it could pump more; there's such a backlog of oil in this country, that the Midland / WTI spread is as much as $16 (see below).

BNSF maxed out with grain cars in the Bakken. Link here. Imagine the backlog if the Bakken did not have the DAPL. What the article failed to mention was all the additional track that was laid during the Bakken boom to accommodate CBR. BNSF says the backlog is normal for this time of year. It's mid-July; seems early. Maybe global warming is moving the growing season to the left in North Dakota.


Since early this year, the Midland crude differential has continued to widen, trading one day last week at a discount of $15.75/bbl to West Texas Intermediate (WTI) at Cushing, the widest spread since August 2014 before settling back to $11.25/bbl on Monday.

The wide price differential is a result of fast-growing production in the Permian and bottlenecked takeaway pipelines. But the trajectory of this increasing price spread has been anything but smooth. Lately, we have seen a blip in the price differentials right around the 19th or the 20th of each month.

In each of the last three months, for a short-lived 24 to 48 hours, the Midland-Cushing price differential has narrowed by $2/bbl or more as Permian shippers have gone on feeding frenzies. Today, we look at these brief upticks in pricing and the pipeline and trader mechanics behind them.

Posted by Bruce Oksol at 8:23 AM No comments: Links to this post