So I don't forget, an early birthday wish, to Cedar Creek Unit 8B 14X-2A-8 -- celebrating its 57th birthday next  month:

Henry Every, described as the most notorious pirate of the late 17th century, was probably born in the village of Newton Ferrers.

John Oxenham (1536–1580) was a lieutenant of Drake but considered a pirate by the Spanish.

Thomas Morton (1576–1647?) was an avid Elizabethan outdoorsman probably born in Devon who became an attorney for The Council For New England, and built the New England fur-trading-plantation called Ma-Re Mount or Merrymount around a West Country-style Maypole, much to the displeasure of Pilgrim and Puritan colonists. Morton wrote a 1637 book New English Canaan about his experiences, partly in verse, and may have thereby become America's first poet to write in English.

Another famous mariner and Devonian was Robert Falcon Scott, the leader of the unfortunate Terra Nova Expedition to reach the geographical South Pole.

The poet Samuel Taylor Coleridge, the crime writer Agatha Christie and the poet Ted Hughes lived in Devon (his funeral and cremation were held there).

The painter and founder of the Royal Academy, Sir Joshua Reynolds, was born in Devon. Chris Dawson, the billionaire owner of retailer The Range was born in Devon, where his business retains its head office in Plymouth.

I've just finished reading The Island That Disappeared, the biography of Providence, an island off the coast of Nicaragua. From that book I finally understand the evolution of piracy, privateering, the Opium Wars (two, China, 19th century), Hong Kong.

I'm not going to live long enough to read all the books that need to be read. Insert "sad face" emoji here.
Posted by Bruce Oksol at 8:40 PM No comments:

I certainly don't get it.

At the sidebar at the right, an app tracks the top ten (10) trending posts.

Whenever I have a question I cannot answer, I a) follow the money; or, b) google it.

So I googled it. I had no idea, but this probably explains it (and it's a pretty good post, in addition).

And, interestingly enough, there's an easy fix for the lack of EpiPens for less than $10.
Posted by Bruce Oksol at 6:11 PM No comments:

This is an incredibly good article. I will archive it and come back to it later.

The article is from The Williston Herald.

I have been talking about DUCs for quite some time. There is a data point in this article that supports my thesis that operators have found that DUCs are a very useful way for ND shale operators to manage their assets.

See if you can spot the data point. But don't write me. It's a rhetorical point. One hint: the data point is a temporary phenomenon.

This is a pretty cool story. Forget all the stuff about the tariffs. Look at the other stuff regarding lobster.

I started "following" the lobster story about ten years ago when we were spending a lot of time in Boston for several years. The lobster industry had been dying but researchers discovered the cause -- related to "fishing practices," and nothing to do with the environment. Once changes were made, the US lobster industry came back very strongly. Any doubts? Have you had any trouble finding lobster in your local supermarket? Down here in Texas, about as far away from Maine as one can get, there seems to be a glut of lobster in our supermarkets.

Anyway, from The WSJ:

And China represents a hungry new market. The post-molt lobsters Maine harvests from July through November have softer shells than Canadian lobsters, so they’re lower quality. But they also sell for several dollars less a pound. In the price-sensitive Chinese market, that has given the U.S. industry a competitive advantage over its Canadian counterparts. In 2017 the U.S. exported more than $137 million in lobsters to China, up from $52 million in 2015.

To be fair, others argue that global warming has been the reason for the resurgence in Maine lobster to the detriment of Connecticut and New York. From NOAA.com:


The lobster industry in New York and southern New England has nearly collapsed. From 1996 to 2014, New York’s registered lobster landings dropped 97.7%—from 9.4 million pounds in 1996 (the state’s most profitable year) to 215,980 pounds in 2014 (the latest data available). The story is much the same in Connecticut, where landings fell 96.6% from the most profitable year, and in Rhode Island, which saw a 70.3% drop from its most profitable year.

“Former lobstermen in Connecticut, many of whom were formerly fishermen, had to switch to clam and oyster farming. A few are also farming seaweed as a second crop,” Margaret van Patten, Connecticut Sea Grant communications director, said in an email. “They have to be really flexible in adapting to available species.”

This doesn’t mean the actual lobster population is disappearing. In fact, populations are relatively steady; it’s the location that’s changed. While southern New England lobstermen have found increasingly empty traps since the mid-90s, Maine’s lobster fishery has boomed. From 1994 to 2014, Maine’s landings surged 219% to more than 124 million pounds.

But it gets back to a question I've asked often, do the benefits outweigh the risks of global warming, assuming it even exists?

The Secret Life of Lobsters: How Fishermen and Scientists Are Unraveling The Mysteries Of Our Favorite Crustacean, Trevor Corson, paperback, 2005

The Last Lobster, Boom or Bust for Maine's Greatest Fishery? Christopher White, 2018 (not recommended unless one wants to read a lot about global warming)


Maine lobstermen have happened upon a bonanza along their rugged, picturesque coast. For the past five years, the lobster population along the coast of Maine has boomed, resulting in a lobster harvest six times the size of the record catch from the 1980s―an event unheard of in fisheries. In a detective story, scientists and fishermen explore various theories for the glut. Leading contenders are a sudden lack of predators and a recent wedge of warming waters, which may disrupt the reproductive cycle, a consequence of climate change.

Christopher White's The Last Lobster follows three lobster captains―Frank, Jason, and Julie (one the few female skippers in Maine)―as they haul and set thousands of traps. Unexpectedly, boom may turn to bust, as the captains must fight a warming ocean, volatile prices, and rough weather to keep their livelihood afloat. The three captains work longer hours, trying to make up in volume what they lack in price. As a result, there are 3 million lobster traps on the bottom of the Gulf of Maine, while Frank, Jason, and others call for a reduction of traps. This may boost prices.

The Maine lobstering towns are among the first American communities to confront global warming, and the survival of the Maine Coast depends upon their efforts.

July 3, 2018: flashback, March 15, 2012, Obama considered releasing oil from the SPR, and at that time, WTI/Brent prices were a whole lot higher, and threatening to go higher.

So, SPR + exports: would easily make up the difference.

OPEC+: says it will increase production by about 600,000 bopd

Had President Obama not killed the Keystone XL it would now be delivering upwards of 830,000 bopd and it would be the "right" kind of oil for US refineries along the west coast.

US supply of crude oil: about 24 days 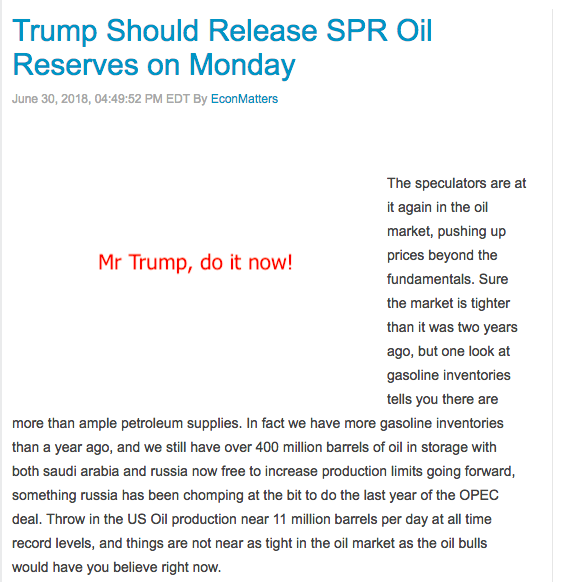 Congress lifted the ban on crude oil exports in December, 2015, after a 40-year ban.

If President Trump is so concerned about the price of gasoline, and now "begging" Saudi Arabia to increase production (as most previous US presidents have done in modern history -- some bowing, some not), wouldn't it be a whole lot easier to simply put a temporary ban on US oil exports?

Meanwhile, he could:
Just saying.

Yup. Apparently. The state legislature is scheduled to vote on the budget Sunday morning (today).

The fix? They caved. Increased taxes all around, including the "millionaire's tax." One exception, a sales-tax increase.


Under the agreement, New Jersey’s top income-tax rate will increase to 10.75% on filers earning $5 million and above, up from 8.97%. The tax is expected to raise an additional $280 million a year in revenue, Mr. Murphy said.

The governor and lawmakers also agreed to a four-year surcharge on businesses earning more than $1 million. These companies would see their income-tax rate increase to 11.5% from 9% for the next two years, before lowering to 10.5% in the two years after that, Mr. Murphy said. The surcharge is expected to raise $425 million for the fiscal year that begins Sunday.

The deal doesn’t include a sales-tax increase, which Mr. Murphy had said was necessary—along with a millionaire’s tax—to establish “sustainable, recurring” revenue streams for the state budget. On Saturday, Mr. Murphy said the sales-tax increase was no longer needed due to a June decision by the Supreme Court allowing states to tax online sales, along with the recent repatriation of money from overseas.

Add all this to the new federal tax on the wealthy in high cost blue states and New Jersey is getting to be a really, really expensive state in which to live. Look at that business tax. Amazing.

They are counting on the online sales tax to make up the difference? Okay.

114 comments at the article so far. Let's see what the trend is: about what one would expect. Comment with which I agree most: a lot of wealthy NJ residents are going to finally put off relocating to Florida after all these years. I disagree with those who suggest they will move to Texas; not likely.

New Jersey: one multi-billionaire does his part to help New Jersey get back to income equality. He left. May 7, 2016.

Yesterday I mentioned that we were going to start seeing a lot of stories on increased crude oil production by Saudi Arabia. In anticipation of that, I posted part 1 of a 2-part series on this subject. This is part 2.

I'm not in the mood to blog quite yet, so I'm going to cut to the chase -- post a few data points/observations and then a few links, and then move on.


Although Saudi production typically rises in the summer due to higher domestic crude oil demand for power plants, OPEC’s leader has also been boosting exports this month, according to the Reuters survey. Saudi Arabia’s crude oil exports rose to around 8 million bpd in June, according to a Reuters industry source. This export volume compares to 7.3 million bpd for April, the latest month for which official figures are available.

Lost in translation: all we know for sure is that President Trump called Prince Salman, and that Prince Salman took the call. Trump's version: we have a commitment from Saudi Arabia that they will increase production by 2 million bbls of oil/day. Saudi's version: we will do what we can to meet global demand, and oh, by the way, our same story that hasn't changed for years: we have spare capacity of 2 million bopd; Reuters has their take on the story.

Spare capacity or BS? Reuters has this story also.


Either way, the kingdom, OPEC’s biggest member, can barely raise output by 1 million bpd to 11 million bpd and even that would be difficult, according to industry analysts who forecast a further oil price rally due to a lack of new supply.

Reuters then has quotes from a seemingly endless number of analysts who suggest Saudi will have trouble coming close to any significant sustained increase in production, and it won't happen overnight.

Black swan? One successful missile launch from Yemen on any part of the Saudi crude oil supply chain will change things overnight.

From statista.com, not inflation-adjusted: 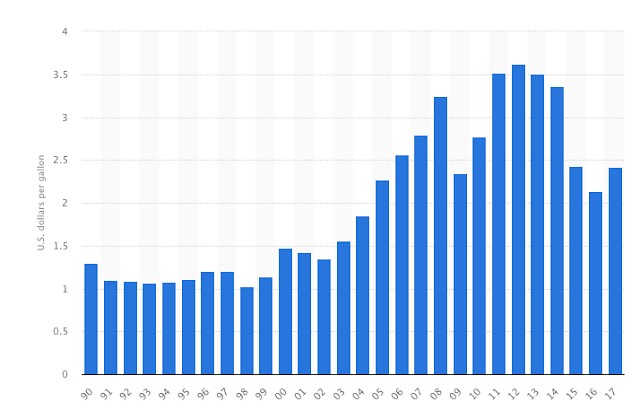 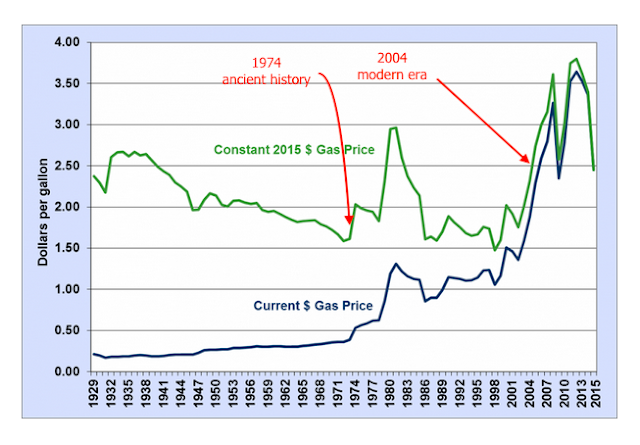 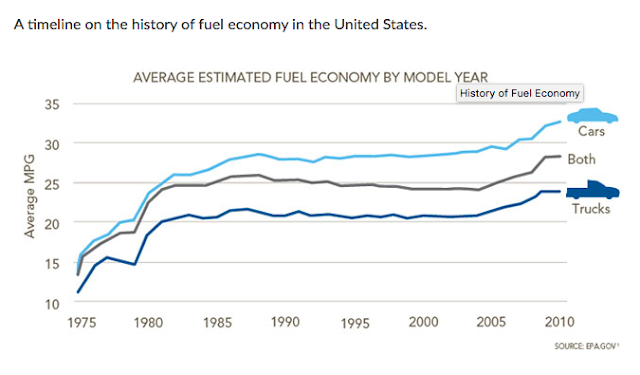 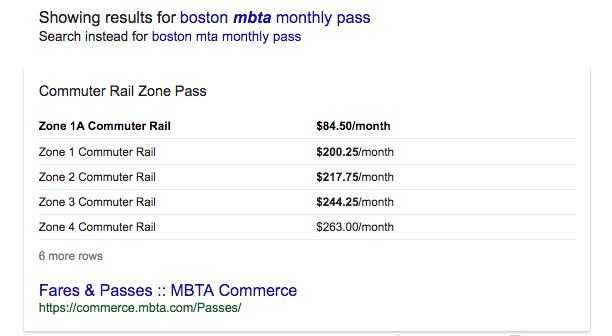 So, for about $100/month, I can pretty much drive anywhere I want, whenever I want (this is just gasoline costs; does not cover maintenance and insurance; or cost of vehicle) or I can take mass transportation (if if even exists in my area) for prices that are likely to be in the same range as above.

Wow, I have gotten far afield.