Posted by Bruce Oksol at 4:37 PM No comments: 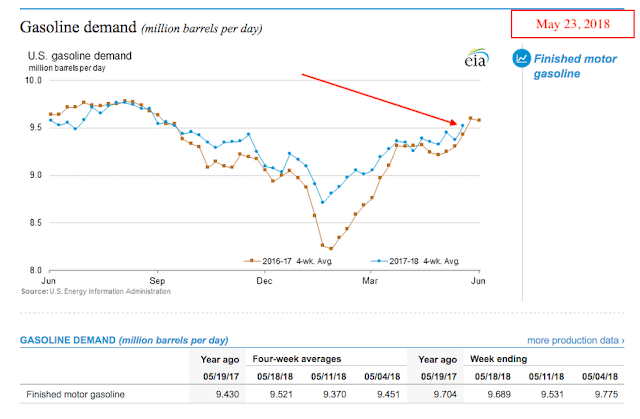 US crude oil days of supply, link here: ever so slightly, the days of US crude oil supply have inched up very, very sightly, maybe from 25.3 days to 26.4 days, but a year ago we were up to 30 days of supply.
Posted by Bruce Oksol at 4:27 PM No comments:

Cheniere Energy has approved the construction of a third liquefaction unit (a train) at its Corpus Christi export terminal in Texas. Data points:
Note: this is as good a time as ever to take another look at "Making America Great Again." Does anyone really think we would have seen a similar list had President Obama been elected to a third term?


Production of natural gas liquids in the Permian has been increasing rapidly, especially in the Delaware Basin, challenging the region’s existing NGL pipelines and other infrastructure and accelerating the development of new capacity.

The Permian already had a substantial amount of NGL pipeline capacity in place before the region’s production of crude oil and associated gas took off, and more has been added since.

But a number of the NGL pipes out of the Permian also move barrels from other basins, either inbound flows from the Rockies or volumes added downstream of the Permian in the Eagle Ford and Barnett shales. In addition, the vast majority of the Permian’s incremental NGL production is occurring in the Delaware, which had only a limited number of pipes and suddenly needs more.

And one more thing: fast-rising ethane demand from new petrochemical plants along the Gulf Coast will reduce the share of ethane that is “rejected” into Permian natural gas. In today’s blog we discuss the NGL takeaway challenges facing producers and processors in cowboy country.

Posted by Bruce Oksol at 5:30 AM No comments: