The NBA sports page: I've now watched most of the NBA conference final games. I know very, very little about NBA basketball; I seldom watch it. But having seen these four teams, the Cleveland Cavaliers seem like the best team. Three of the four teams -- Houston, Golden State, Boston look like typical NBA teams. Cleveland looks like a team that wants to win. Or at least it has the franchise player that wants to win.

The sports page: for the NHL, we're in a holding pattern right now. Waiting for the final conference game (Capitals vs Lightning) before we get to the Stanley Cup championship.


Barbara Ann, The Regents
Posted by Bruce Oksol at 11:10 PM No comments:

On another note, from a press release -

Posted by Bruce Oksol at 8:14 PM No comments:

Off The Net Later This Morning -- Don't Bother To Check The Site Until Later This Afternoon / Evening -- May 22, 2018

I'll be reading about China history and touring the local area in my undisclosed location.

I assume there are some "national" initiatives but they are being worked at the Cabinet level. Trump is now focused on the Korean peninsula; China; and, the Mideast.

Shallowest story of the day so far, from SwimSwam: 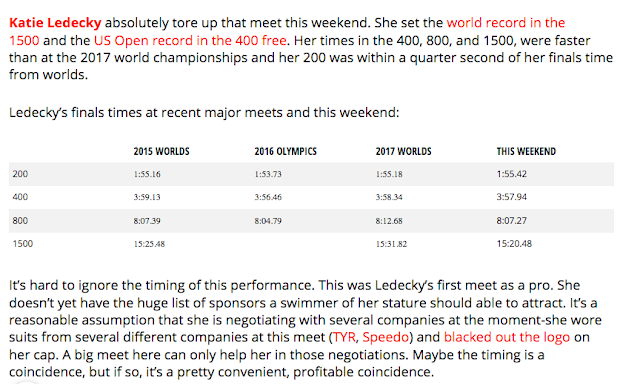 I posted the above for the archives and to remind me how incredible her times are. However, the writer's opinion regarding "why" Katie is doing so well now is incredibly shallow and shows the lack of understanding of human behavior. What a doofus. Yes, I'm sure during the 1,450th meter of the 1500-meter freestyle, Katies was thinking, "If I can just beat the 15:20 time, my bargaining position will be 23% better. Need to swim faster." What a doofus. Not Kaite. The writer. 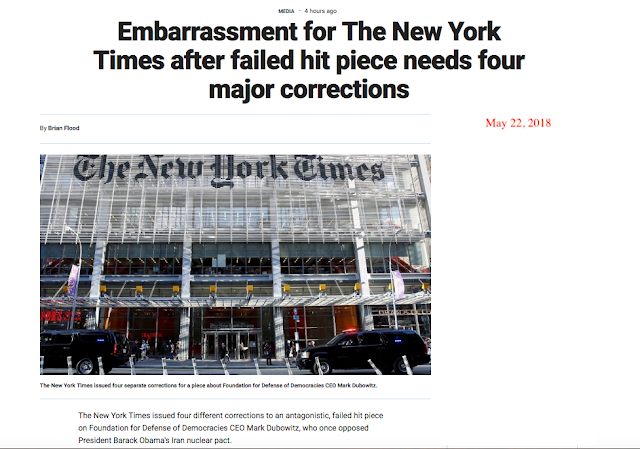 
RBN Energy: steps toward making Louisiana a crude-exporting powerhouse, part 2. After reading the "Goldmoney" article, one wonders if Louisiana is "over-building."


TransCanada Corporation TRP recently announced that the construction of its Coastal GasLink pipeline is likely to commence in early 2019.

The partners in the project have proposed to design and operate an LNG export terminal in Kitimat, British Columbia. The project will likely cost around $32.7 billion and is meant for exporting cheap natural gas from Canada to Asia. Post construction, this project will be able to export up to 24 million tons of liquefied natural gas per year.

The Coastal GasLink pipeline project worth $3.8 billion will consist of a 415-mile pipeline, with transportation capacity of 5 billion cubic feet per day.

Once it comes online, it will be a game changer for the Canadian natural gas producers, transporting natural gas from shale fields in Alberta and northeast British Columbia to the LNG Canada export facility.


May 9, 2018, T+1: first full day since President Trump walked away from the Iran deal hammered out by President Obama with $400 million in cash.

So, this is T+14 -- fourteen full days since President Trump walked away from the Iran deal.

Observations:
Pet peeve #4: all those stories about lack of investment in the oil sector. Today, from the Rigzone staff -- "CAPEX among Asia's O&G companies set to reach #102 billion this year (2018)." For newbies:
Trans Mountain Pipeline news today: none. My hunch: the Canadian federal government has supplied so much pressure to KMI Canada to complete this program, there will have to be some fake news by the deadline (May 31, 2018) that discussions are on-going, that the deadline has been extended, that progress is being made, that yada, yada, yada, but the tea leaves suggest the Trans Mountain Pipeline has less chance than the Keystone XL and both of those have less chance than the Enbridge Line 3, and the latter is not a sure thing either.

Immigration: speaking of Canada, the country has said "enough is enough." I guess all that talk about inviting refugees to their country who found the US unwelcoming was a bit much for even Justin Trudeau. Most likely his constituents have discovered that the "other people's money" paying for these immigrants is coming from their wallets. And, by the way, the immigrants don't speak French. From Reuters:

WTI, "lower for longer" is dead. Now it's the Financial Times. Wow, "lower for longer" didn't last long. The writer says it's the end of an era. Wow, "eras" are now lasting less than five years.
No wonder millennials are panicked about global temperatures rising 2 degrees over the next 100 years -- that's like tomorrow.

Climate change: BP paid $65 billion in lawsuits for the Deepwater Horizon mishap. That will be peanuts compared to what oil companies will pay when juries start awarding "global warming" damages against the oil companies. I'm glad my investing days will be over by then. It woudl behoove oil companies to get out in front of this sooner than later.

Hell freezing over. Wow, wow, wow. I never, never, expected to see this from the EIA. Wow. The EIA says EVs see "less use" than conventional vehicles -- wow, what an understatement -- 99% vs 1%? Later, 9:44 a.m. CDT: right on cue.  I remember being taken to task several years ago suggesting we would be seeing $5 gasoline. Well, here it is, and crude oil is at even lower prices than it was when I first talked about $5 gasoline. Scary, huh? 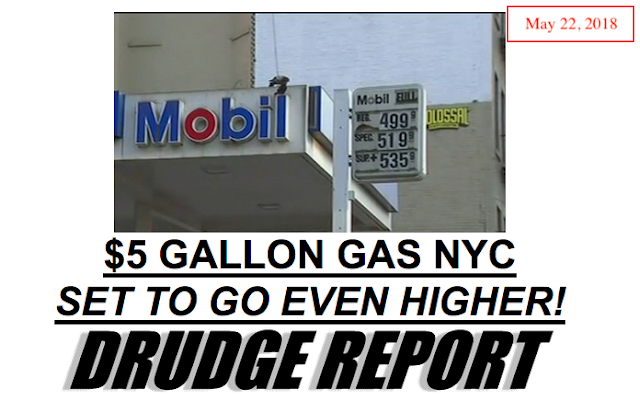 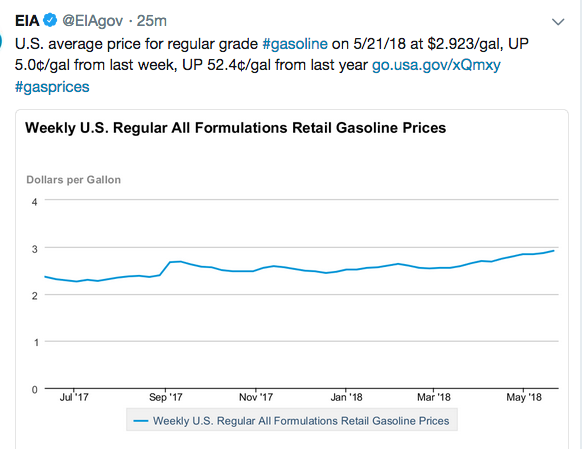 Fake news: the stories about "high-priced crude oil" and "high-priced gasoline" are starting to increase by and by this time should be the #3 story next week, with the Mueller investigation #2 and the Stormy Daniels-lawyer story #1. I would assume the Hillary "war room"; Obama's "deep state"; and, the George Soros-Bernie Sanders-Pocahontas axis will pour gasoline on the fire to keep it going. We already have an oilprice headline that "farmers are reeling from high oil prices" and are ready to lock in current diesel prices. Okay. Whatever.

WTI: a slow newsday? Speaking of oilprice, there "front page" has not changed since last night. Usually it changes every 35 minutes.

Equity markets: insane. Unfortunately I am in an undisclosed location that has no television so i cannot watch CNBC. But with regard to the equity markets, one word: insane. There's an old adage in investing: keep one's powder dry. This says that folks should keep some money in cash to be ready to invest when the market drop significantly (or when a particular stock, for whatever reason, becomes "attractive"). I wonder if anyone has ever done any studies on that advice. Another piece of advice, "sell in May, go away." I wonder "when" in May  one should sell. This year, it appears that "late" May will turn out a lot different than "early" May. Right now, the Dow, after rising almost 300 points yesterday, could open as much as another 300 points higher.

Back to WTI: over at Bloomberg via Rigzone -- "forget $80-oil The big rally is in forward prices." What a great time to re-read this post on "crude oil -- the next five years." This post is already, based on page views, one of my most popular posts. It remains "free" to subscribers. The subject line says it is still "in progress." I had planned to add some comments. Not sure if I will. Everything moves so quickly, anything I post now will look like "Monday morning quarterbacking.

But if I read that article correctly, the writer, "Goldmoney" (in Yiddish, "geltgelt" or "Hanukkah gelt" or just plain, "gelt." In Norske, "lefselefse." And in the pizza world, "pizzapizza") -- now I forget where I was going.


Brent crude oil grabbed all the attention after spot prices hit $80 a barrel last week. And yet, almost unnoticed, a perhaps more important rally has occurred in the obscure world of forward prices, with some investors betting the "lower for longer" price mantra is all but over.

The five-year Brent forward price, which has been largely anchored in a tight $55-to-$60 a barrel range for the past year and a half, has jumped over the last month, outpacing the gains in spot prices. It closed at $63.50 on Friday (May 18, 2018).

"For the first time since December 2015, the back end of the curve has been leading the complex higher," said Yasser Elguindi, a market strategist at Energy Aspects Ltd. in New York. "It seems that the investor community is finally calling into question the 'lower for longer' thesis."

Bob Dudley, the chief executive of oil giant BP Plc, coined the "lower for longer" mantra in early 2015, warning of a protracted period of cheap crude. He later clarified that he meant "lower for longer, but not for ever."

Early in the article, this line:


Over the past three years, long-dated prices had been weighed down by the belief the growth in U.S. shale production, combined with the adoption of electric vehicles, would keep prices under control.

My two pet peeves:
Oh, yes, a third pet peeve,
Again, I digress. Back to the Bloomberg article. Actually nothing more to say. As soon as I saw "electric vehicles" in the article I knew it was time to move on. And that's too bad, I was on a roll. LOL.


Anyone Who Had A Heart, Cilla Black