This is for newbies and for me, just for the fun of it. Seriously, I am just passing some time -- no need to really spend any time on this well. Maybe this would be a great time for a music video:


When I Get Low, I Get High, The Speakeasy Three

This is just an interesting example of a Bakken well. As far as I can tell it was fracked only once, back in 2010 with 17 stages, and using slightly less than 2 million lbs of sand. It is a short lateral. Look at the production profile. Fracked once but probably a number of "work-overs," pumps, neighboring wells, etc., which all affected production. The jump in production in 2017 was probably due to a neighboring well (#31206) being fracked. The continued good production in 2013 was probably due to another neighboring well (#24855) being fracked. This tells me this well (#18825) is a great candidate for a re-frack.

And the Bakken is filled with these kinds of wells, and that's why it's so difficult to predict how all this will play out.
Posted by Bruce Oksol at 9:11 PM No comments:

There are many, many story lines and the implications are profound. 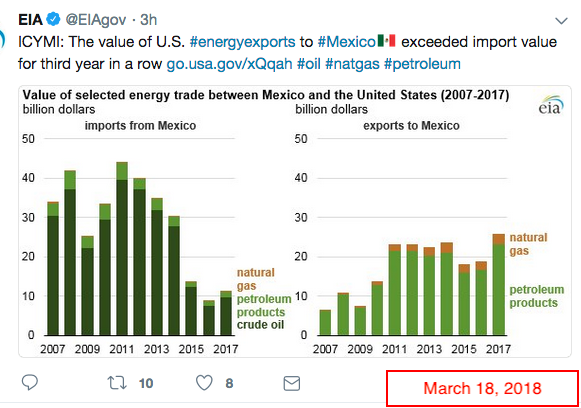 Some initial comments (beware: these are dollar amounts -- not volume):
Clearly, one of the big stories this decade will be Mexico, the US, and energy.
Posted by Bruce Oksol at 5:11 PM No comments:


Steffes, one of Dickinson's largest employers, will be expanding its manufacturing facility located four miles north of Dickinson on North Dakota Highway 22, the company announced in a recent press release.


The 36,000 square foot expansion will provide space for additional manufacturing, new product development and offices to allow Steffes to better serve growing customer needs," the company said in a statement. "Committed to creating jobs and positive local economic impacts, Steffes hired GT Architecture of Dickinson to design a state of the art facility."

The structure will have 42-foot sidewalls, high capacity crane hoists and incorporate a modern three story office, conference and employee breakroom structure, the release stated. Local contractors Tooz Construction and Winn Construction will participate in the project which is estimated to take eight months.

Steffes will be making investments in the building infrastructure, equipment and personnel with an estimated completion date of November 2018. The company said the expansion will create more than 30 new jobs over the next two years.

From this weekend's edition of The WSJ: David Byrne on traveling the world by bicycle -- and getting lost.


The former Talking Heads frontman, who’s touring the world for his album ’American Utopia,’ on his penchant for two-wheeled exploration, losing his way in a Swedish forest and his devotion to leftovers.

This spring summer, you may notice a familiar-looking figure pedaling along your local cycling path, and you may ask yourself: “Is that David Byrne, the former frontman of Talking Heads?”

It could well be. Mr. Byrne has just embarked on a world tour—taking him to more than 90 cities, from Santiago, Chile, this Friday, to Brooklyn, N.Y., on Sept. 17—to promote his new album, “American Utopia,” and he’s bringing his bike.

Though this is his first solo record since 2004, these last 14 years haven’t been idle ones. Mr. Byrne has racked up countless miles, and he has the projects to show for it. His cycling habit led to his 2009 book “Bicycle Diaries,” a collection of essays drawn from his two-wheeled excursions in cities such as Istanbul, Buenos Aires, Pittsburgh and New York, where he lives, as well as Manila, in the Philippines, where he found inspiration for “Here Lies Love,” the 2010 disco-musical about Imelda Marcos he created in collaboration with Fatboy Slim.

Mr. Byrne’s worldly expeditions informed another recent project, called “Reasons to be Cheerful,” a collection of pioneering initiatives in wide-ranging fields, from transportation to energy production, all cataloged on a website of the same name. His observations on these initiatives gave rise to a TED Talk-like presentation, which he’s given recently in New York, London, Amsterdam and Berlin.

Posted by Bruce Oksol at 3:33 PM No comments:

Note: I'm not sure if this is ready for prime time. I will post it anyway. Don't quote me on any of this. I'm still working through it. The reason for doing this was the developing meme that North Dakota has to add 157 net new wells month-over-month to maintain production at 1.2 million bopd.  It was my impression that North Dakota has not come close to 157 wells/month (1,884 per year) and yet the state has increased production year-over-year in the past eight months.


The screenshot from the "Bakken Reality Check" linked above: 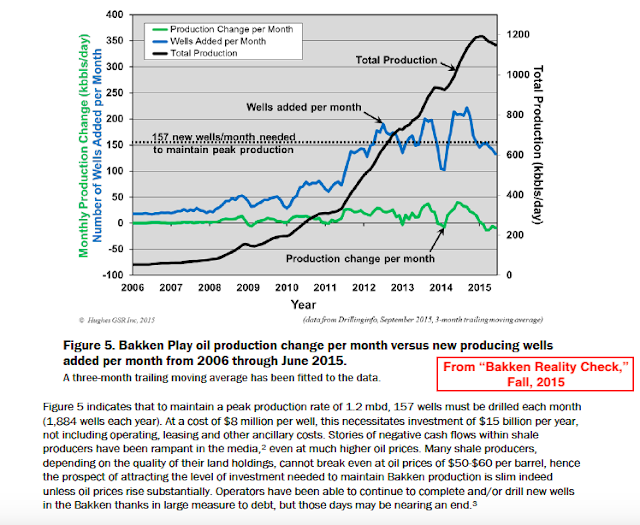 "Bakken Reality Check" suggests that operators need to add 157 wells each month (1,884 per year) to maintain peak production at 1.2 million.

Between the autumn of 2015, when the Bakken Reality Check was published, and January, 2018, the most recent month for which data has been released:
Again, I did this very quickly, and there are likely to be errors in my numbers, and my methodology, but I wanted to take a quick look at the "Bakken Reality Check" projections back in 2015 to what has happened since.

This is very much in line with an increasing number of analysts noting that there seems to be a "negative decline rate" developing in shale plays.

See the article by oilprice.com editor Nick Cunningham: "Can the oil industry continue to lower decline rates at mature fields?"


“I cannot remember ever in my career having seen a negative decline rate,” the British oil-giant’s chief executive officer said in an interview on the sidelines of the CERAWeek by IHS Markit energy conference in Houston.