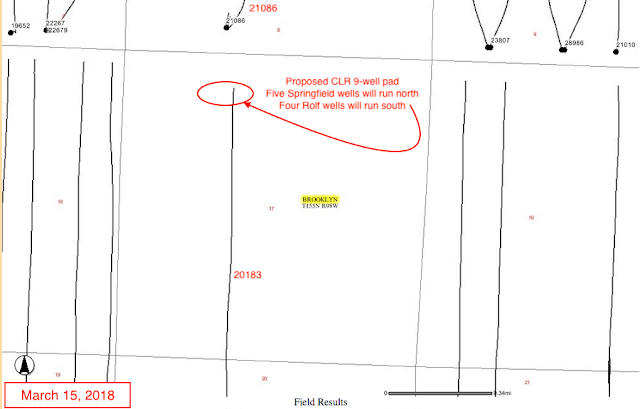 The 9-well pad:
Existing well, running north from the south

Only one book today.

Understanding The Lord of the Rings: The Best of Tolkien Criticism, editors Rose A. Zimbardo and Neil D. Isaacs, c. 2004.


At the very moment that such champions of modernism as Philip Toynbee and Edmund Wilson were mocking and maligning The Lord of the Rings as "dull, ill written, whimsical, and childish," coarse fodder for those readers who have "a life-long appetite for juvenile trash," Auden, among the great modernist poets, wrote this admiring and penetrating analysis of Tolkien's great epic.

Auden considered The Lord of the Rings to be the kind of work that shapes an enduring, universal mythic and psychological pattern in human culture and consciousness. It is, he says, a "literary mimesis of the subjective experience of becoming." Dismissing the left-wing paper warriors who  attached Tolkien as a fascist and a racist, Auden calls attention to the political and social ideals the novel upholds: a "benevolent monarchy," within which the Shire exists as "a kind of small-town democracy." It is Sauron's kingdom, which all the free peoples of Middle-earth abhor, that is "a totalitarian and slave-owning dictatorship."


The Detective Story: the goal is not an object or a person but the answer to a question -- who committed the murder?

The Adventure Story: here the journey and the goal are identical.

Moby Dick: here the Precious Object and the Malevolent Guardian are combined and the object of the Quest is not possession but destruction. Another example of a Quest which should not have been undertaken, but it is tragic rather than evil. Captain Ahab belongs in the company of Othello, not of Iago.

The Kafka Novels: in these the hero fails to achieve his goal, in The Trial either to prove himself innocent or learn of what he is guilt, in The Castle to obtain official recognition as a land surveyor; and he fails, not because he is unworthy, but because success is humanly impossible. The Guardians are too strong and, though Kafka avoids saying so I think one can add, too malevolent. What makes K a hero is that, despite the evidence that Evil is more powerful than Good in the world, he never gives up the struggle to worship the Prince of this world. By all rules he ought to despair; yet he does not.

My first thought after reading that paragraph by WH Auden on the Kafka novels? Trump.


To indicate the magnitude of the task Tolkien set himself, let me give a few figures. The area of his world measures some thirteen hundred miles from east (the Gulf of Lune) to the west (the Iron Hills) and twelve hundred miles from north (the Bay of Forochel) to south (the mouth of the River Anduin).

In our world there is only one species, man, who is capable of speech and has a real history; in Tolkien's there are at least seven.

The actual events of the story cover the last twenty years of the Third Historical Epoch of this world. The First Age is treated as legendary so that its duration is unknown, and its history is only vaguely recalled, but for the 3,441 years of the Second Age and the 3,021 years of the Third he has to provide a continuous and credible history.

My first thought after reading those paragraphs: George Lucas and Star Wars.


One has to say that there is, probably inevitably a certain degree of bowing to popular taste in Jackson. Tolkien's perceived lack of strong female characters leads to the insertion of Arwen as Frodo's rescuer in the first movie, but the heroic role she is given rings a little hollow ... But it perhaps offers a moment for female viewers to place themselves in the story.

If you've seen the movies (and who hasn't?), Tom Shippey's essay is a must-read.

I did not care for CS Lewis' essay -- CS Lewis was Tolkien's closest friend -- but the essay appeared to have been dashed off in one afternoon.

If one has time to read just two selections from this anthology, I recommend WH Auden's and Tom Shippey's.

Wow. EOG has 40% upside -- Fitzsimmons over at SeekingAlpha.


A couple of years on, the IPO hasn't yet happened, and there are now signs it could be pushed into 2019. The figure looks like it resulted from a highly scientific process of multiplying Saudi Arabia's roughly quarter-trillion barrels of proved oil reserves by a multiple of $8. But the fact that Aramco is being privatized in the first place undercuts such simple valuation by reserves, because the IPO acts as a hedge against weaker long-term oil demand. It makes little sense to apply such blanket valuations against 60 years' worth of production (companies usually carry about 10 - 15 years of proved reserves on the books).

Rule number one with an IPO: Don't announce a target value years ahead of the actual sale -- especially if one is tempted to use the word "trillion."

That rule was broken way back with Saudi Arabian Oil Co., or Saudi Aramco. In early 2016, when Prince Mohammed bin Salman first unveiled plans to list shares in the oil behemoth, he boasted about a price tag of $2 trillion. A couple of years on, the IPO hasn't yet happened, and there are now signs it could be pushed into 2019.

The problem: cash flow. Saudi Arabia can't get there from here. 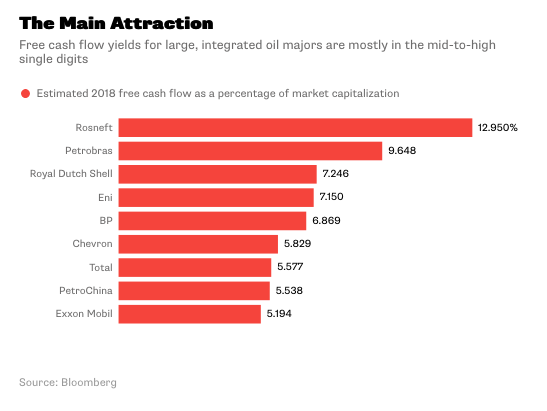 How Saudi gets there (hint: it won't, unless there's a huge geopolitical event): 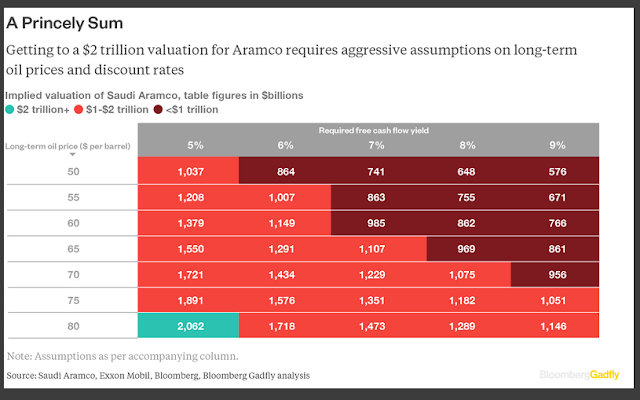 One big problem: when it comes to some offerings, cash flow does not matter at all. It's all about the mojo. If cash flow mattered, Tesla would have gone away a long, long time ago.

How could Bloomberg's gadfly miss that?

"Everyone" will want a piece of the Saudi Aramco pie. Or not. But cash flow is not the driver.

... I wouldn't post links to oilprice.com, but sometimes it's almost impossible not to link some articles. We've talked about this for quite some time. This is why I suggested the other day that the biggest oil story of the year might be ExxonMobil's decision to move to light oil at its Gulf Coast refineries. RBN Energy has talked about this more than once. From oilprice.com:


"2020 is going to usher in a mammoth sea change for the global petroleum market. On January 1, 2020, the International Maritime Organization - the agency that regulates the global shipping market - will enforce a global sulfur cap of 0.5 percent on marine fuels.

While this is this going to have the biggest impact on fuel oil and middle distillates, it is also going to influence the crude flows of heavy sweet barrels. In fact, it already is.

Heavy sweet crude is going to be increasingly in demand in 2020, as refiners look to pivot towards producing low sulfur fuel oil.

The challenge for the global market is going to be getting its hands on heavy sweet crude. According to our ClipperData, heavy sweet crude exports make up just over 1 percent (!) of total waterborne exports, and have been on the wane in recent years. Of these exports, nearly two-thirds come from West Africa.

Paragraph 6: Angolan Dalia is the leading grade, but there are also exports of Lokele from Cameroon, Baobab from the Ivory Coast, Yombo from Congo and Ebok from Nigeria. Doba, which is produced in landlocked Chad, is the second-largest export, and hits the global market via loadings from Cameroon.

In terms of the destination of these grades, three countries account for a half of all barrels: the U.S., India and China. An interesting trend is emerging, as illustrated in the chart below. China has surpassed the U.S. in just the last year to become the largest recipient.

For newbies: there are two huge things I've learned from the blog over the years regarding heavy oil vs light oil
The coolest thing about the story above: while reading paragraph six (6) above, a 2 x 4 hit me on the head, and a light bulb went off: quick -- name the one country in the world that is investing heavily in African heavy oil.

As I said to my son-in-law last night, things are moving very, very fast. My only regret: I won't live long enough to see many of these "sea-changes" -- pun intended.

Not enough arrows in her quiver?

Pocahontas: "I don't see how any senator can vote for Wall Street deregualation. 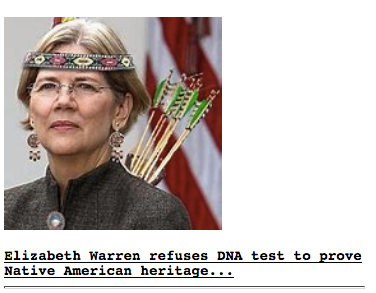 
Under the radar/connecting the dots:

Season two has barely begun. In the first episode, Rex Tillerson was fired.

Now, looking to episodes 2, 3, 4, and 5. From CBS this morning. The never-Trumpers see this as chaos. The Trumpers see this as moving best folks into right positions, cutting losses, keeping folks on their toes. In the bottom photo, I agree: three of the four, and perhaps all four, need to go, sooner than later. There's one face in the crowd that unfortunately does not show up in either photo below: 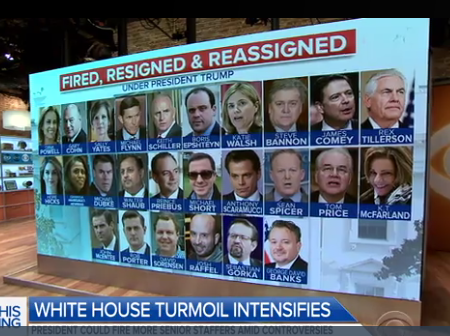 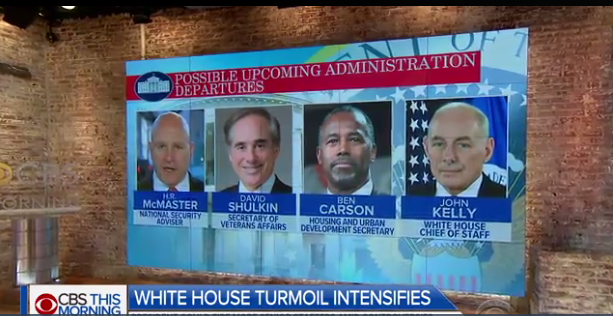 If nothing else, this will keep the US Senate busy with confirmation hearings.
Posted by Bruce Oksol at 8:30 AM No comments:

March Madness: "First Four" completed, and now to the tournament. Huge day today as the first round begins. Sixteen (16) games today. The game to watch: Alabama vs Virginia Tech.

Iditarod: after conquering the Winter Olympics, a Norwegian wins the Iditarod.

Statoil name change: to Equinor. Removes "oil" from name. Embraces renewable energy. My hunch: under duress they made the decision -- a political necessity.

Chart of the day: look at the decline of US - Saudi oil imports year-over-year, via Twitter: 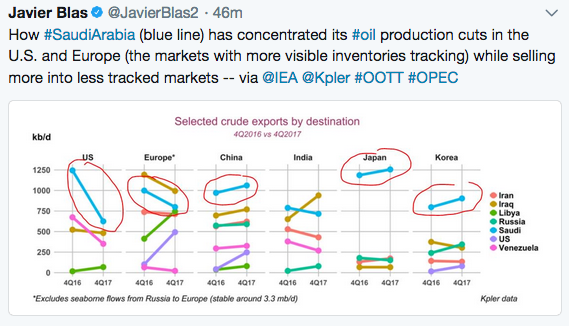 
The worst of this winter’s cold has passed, but the impact of structural changes in U.S. power generation will be felt in natural gas markets for years to come. The generation mix has been changing rapidly in recent years, and the switch from coal to gas is happening at an even faster pace on the East Coast than in the country overall.

This switch reflects both coal-plant retirements and ongoing competition between remaining coal plants and gas plants. But low-cost gas supplies in the Marcellus and Utica plays don’t always have ready access to the biggest consuming markets, and this winter, we saw how the increasing call on gas for Eastern power generation can stress the gas pipeline grid and cause price blowouts. Today, we continue a series on Eastern power generation and prices by untangling the sources and drivers of gas-fired generation growth in the region.