The Bakken is back! North Dakota led the nation in real GDP growth as the oil and natural gas industry rebounded.

Vern Whitten saw that -- he sent a portfolio of "before and after" photos of six years of the Bakken.

But perhaps the best Bakken story of the week was buried in the Oasis, January, 2017, presentation:
The best non-Bakken story all week: faux environmentalists starting to walk back AGW.

Other non-energy story:
Among energy stories this past week, this might have been one of the least-reported among the big stories:
Other general energy story:
Operations
MDU transports a record volume of natural gas; up almost 10% year-over-year
Tight oil wells showing massive improvement -- an industry-wide phenomenon
Random update of an XTO wildcat; what a difference a work over makes
MRO's oil type curves best in North Dakota (beats those in the Permian)

Miscellaneous
How big was the Bakken revolution? Pretty big 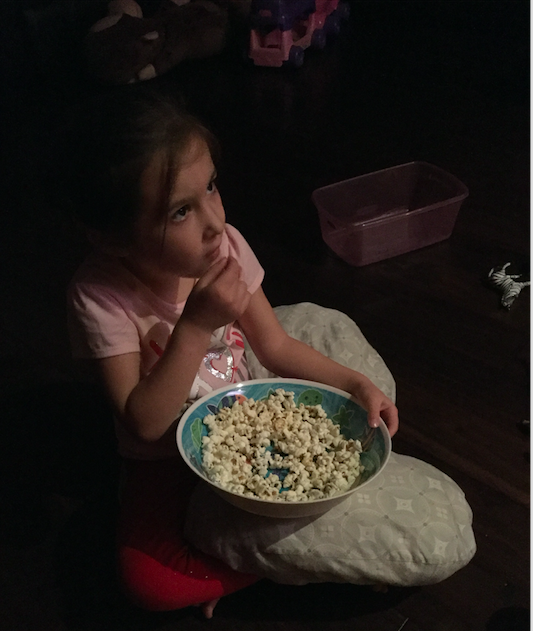 Posted by Bruce Oksol at 8:03 PM No comments:

The Bakken Is Dead! Remember All Those Stories Back In 2017? Now This: Oil Retakes Top Spot In State GDP As Bakken Economy Rebounds -- DAWA -- February 10, 2018 -- Never Saw This Headline In Mainstream Media -- North Dakota Led The Nation In Real GDP Growth 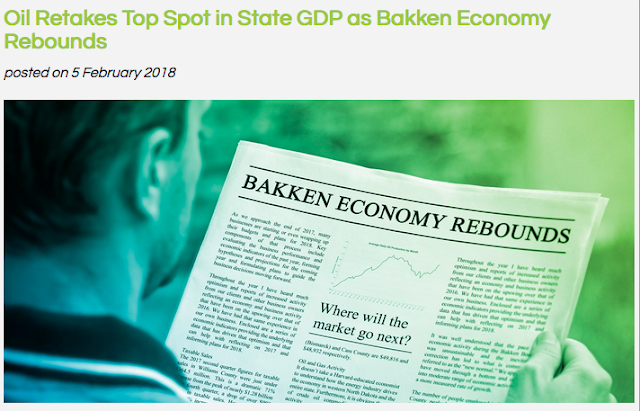 If I were in the mood, I would link all those stories from 2017 suggesting the end of the Bakken, starting with Art Berman's article, and posting the Atlantic Monthly story, but I'm not in the mood. Maybe later.

As I wrote that, this song flashed in front of me:


But I digress. Look at this from DAWA Solutions Group. DAWA has an office right down the street from where my father's agency was. From the linked article:

A deeper dive into state GDP by industry shows that mining, including the oil and gas industry, attributed for the lion’s share of growth since the beginning of 2016. Mining grew from $4.4 billion  in the first quarter of 2016, to $7.5 billion in the third quarter of 2017, a 75.5% increase in less than two years and once again leads the state. 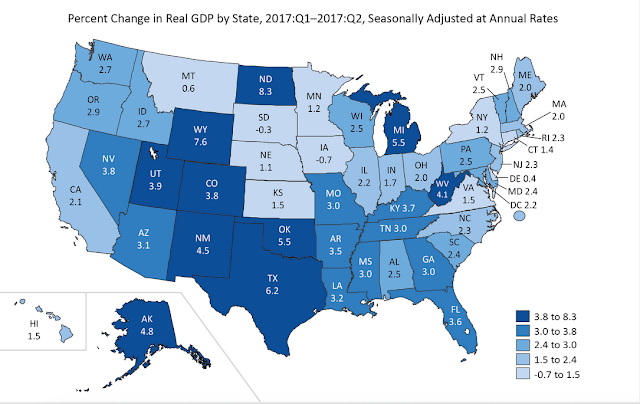 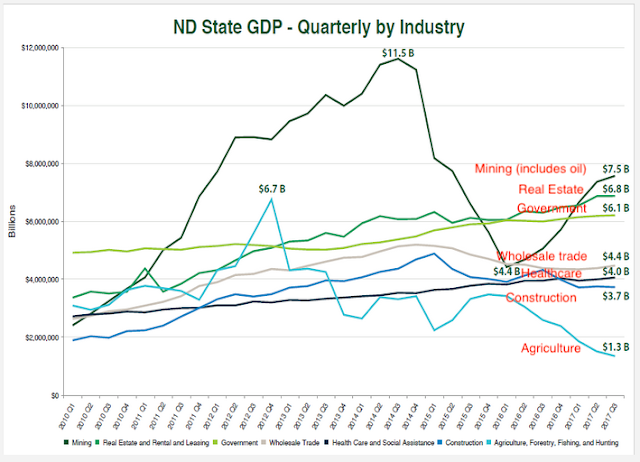 Our oldest granddaughter has recently taken up an interest in poetry. I went through that phase not too many years ago, mostly through Sylvia Plath, but many others.

I was looking for one of my "understanding poetry" books here in the house but was unable to find it. Most likely it is packed away and, unfortunately, I did not inventory it apparently.

Be that as it may.

I went to Amazon to see if I could fine the book I'm looking for. This book, in the screenshot below, is not the book I was looking for but the book intrigued me enough to consider buying it.

Buy new: $99.95. I about fell off the couch. A hundred dollars for a paperback book. Certainly I could do better if I bought a used copy. Look at these prices -- again, remember -- these are used copies and I did not see any in "excellent" condition.

Two screenshots. In case you miss it, look at the price of this used paperback at the bottom of the second screen shot: 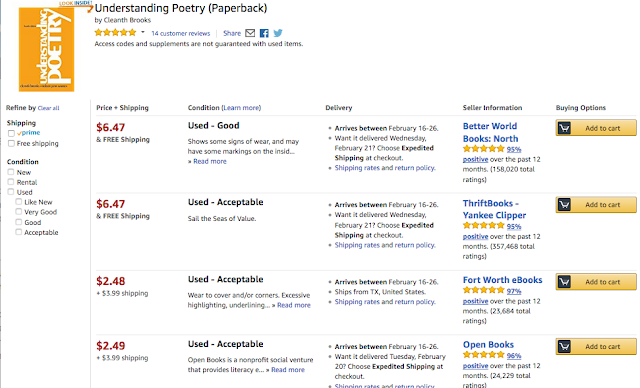 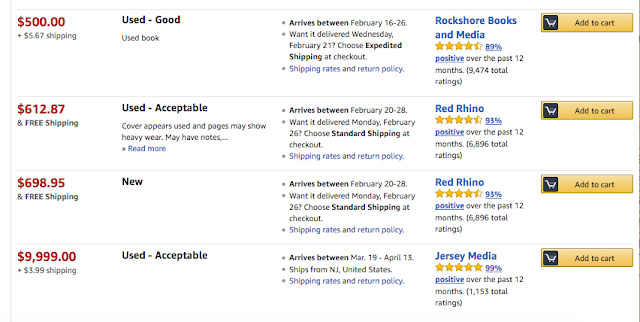 Note, that the shipper from New Jersey selling a copy for $9,999.00 won't even give you a break on shipping. LOL.
Posted by Bruce Oksol at 6:20 PM No comments:

The new pipeline comes as Bismarck, ND-based MDU transported a record volume of natural gas -- up 9.6% year/year -- through its system in 2017, partly because of completing two expansion projects that increased pipeline capacity by 62 Mcf/d.

The multi-state utility holding company expects to further boost its natural gas transportation capacity in 2018 to more than 1.8 Bcf/d after completing the 38-mile, 16-inch Valley Expansion project and the 13-mile, 24-inch Line Section 27 expansion project. Construction on both projects, which are headed up by MDU’s WBI Energy subsidiary, is expected to begin this spring.

“This business segment continues to seek additional growth projects to increase transportation capacity, including a continued focus on the Bakken, which is currently producing record volumes of natural gas,” Goodin said.

Much, much more at the link, including an update on their wind farm activity (FWIW). 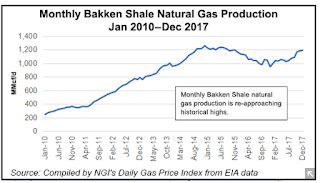 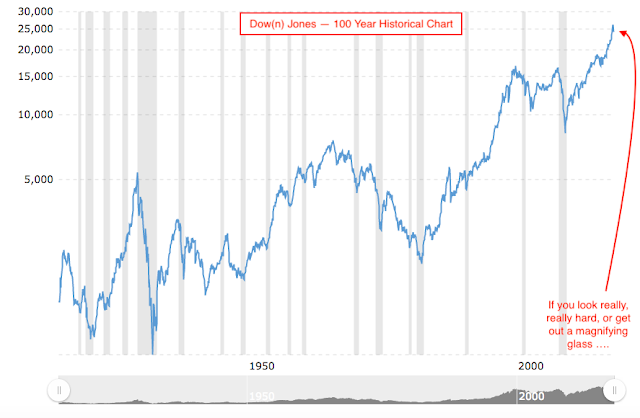 There has been so much good economic news for the country this past week, it's impossible to keep up.


From the linked story above, a couple of quotes, data points.

National Grid’s New York customers will see first-year increases of only 1.7% for electric and 2.4% for gas rates, as opposed to the 13% and 14% originally proposed, said James Denn, a spokesman for the New York State Department of Public Service, the state’s utility regulator.

“It’s the right thing to do for our customers,” Ms. Smyth said. “We view that as a pass-through cost and to the extent that the tax rate is going down, we are going to build that into the new rates.”

It's the right thing to do for our customers. LOL.

Other great stories to savor over the weekend -- scanning the weekend edition of The Wall Street Journal:

Speaking of William and Mary, from wm.edu:


William & Mary is the second-oldest college in America. The original plans for W&M date back to 1618 — decades before Harvard — ....

On February 8, 1693, King William III and Queen Mary II of England signed the charter for a "perpetual College of Divinity, Philosophy, Languages, and other good Arts and Sciences" to be founded in the Virginia Colony. And William & Mary was born.

Comey will follow in a long line of distinguished William and Mary educators and supporters:


William & Mary has been called the Alma Mater of the Nation because of its close ties to America's founding fathers. A 17-year-old George Washington received his surveyor's license through W&M and would return as its first American chancellor. Thomas Jefferson received his undergraduate education here, as did presidents John Tyler and James Monroe.

How big is big? Today the AP has this headline -- farthest photos ever taken, from nearly 4 billion miles away.


The NASA spacecraft that gave us close-ups of Pluto has set a record for the farthest photos ever taken.

In December — while 3.79 billion miles (6.12 billion kilometers) from Earth — the New Horizons spacecraft snapped a picture of a star cluster. The photo surpassed the "Pale Blue Dot" images of Earth taken in 1990 by NASA's Voyager 1.

Nasdaq to relocate headquarters from downtown Manhattan to Times Square