Random Update Of A BR Jerome Well With An Increase In Production -- January 20, 2018

In an NDIC letter dated July 19, 2016, this well was designated a "stripper well." There is no evidence that it was ever re-fracked:
Note jump in production in mid- to late-2016. With such a jump in production, I would assume that the well has been re-fracked. I don't know. No sundry form and nothing in FracFocus to suggest it was re-fracked (though I could have missed something): 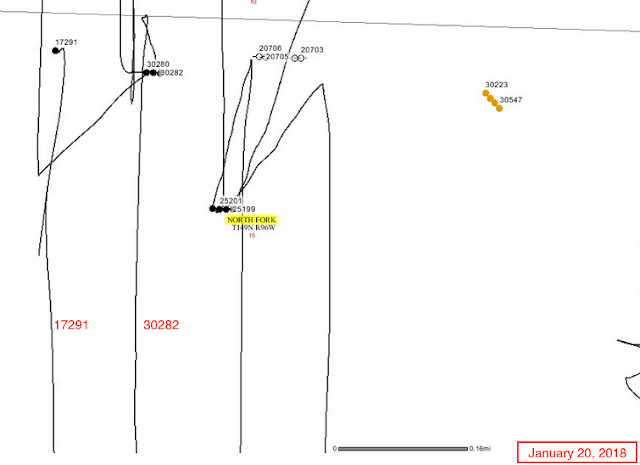 A few months ago I started tracking wells that produced in excess of 50,000 bbls in a single month, a phenomenon that was occurring more often in 2017 with higher intensity fracks (more stages; more proppant).

But as it turns out, there was an occasional well in the early days that produced in excess of 50,000 bbls in one month. Look at this one. EOG drilled a short lateral that produced 50,042 bbls in its first month of production:

Note again, this was a short lateral. Extrapolated to a long lateral, this well produced 100,000 bbls of crude oil in the first month back in 2008; a open hole frack using about 2 million lbs sand.
Posted by Bruce Oksol at 10:22 PM No comments: 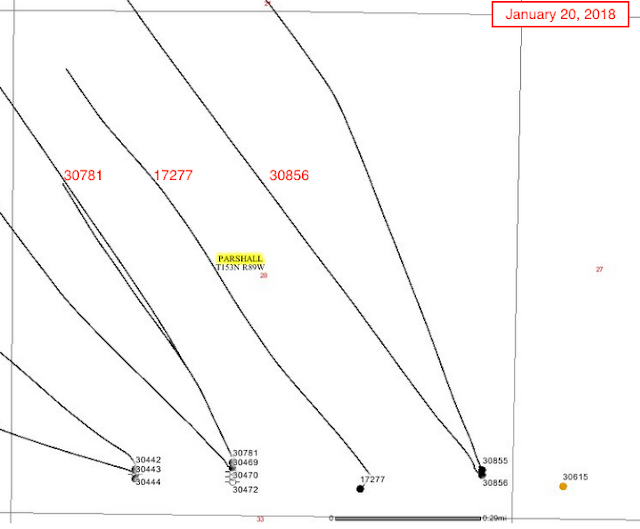 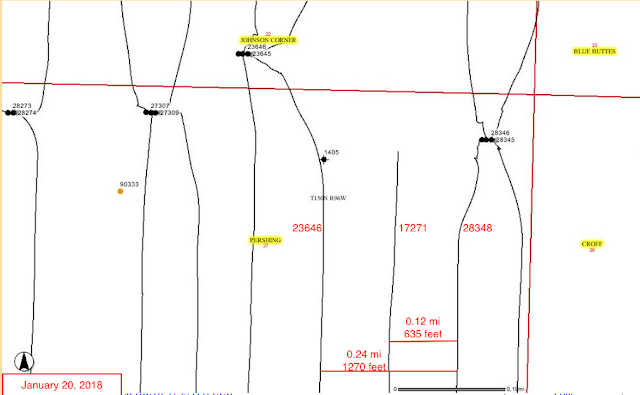 No big deal.
Posted by Bruce Oksol at 9:46 PM No comments:

Miscellaneous
Random update of EOG activity in North Dakota in calendar year 2017
Posted by Bruce Oksol at 2:55 PM No comments:

Trucking: trucking companies race to add capacity, drivers as market heats up -- WSJ. This seems like the third or fourth post on this subject in the last six months. And again,

Posted by Bruce Oksol at 2:39 PM No comments:

February 16, 2018: in the note below I came up with a "target price" of $193/share for AAPL. That was January 20, 2018, almost a month ago. Now, today, Business Insider says Wall Street analysts polled by Bloomberg have an average price target of $191, nearly 12% greater than the current price.

From the weekend print edition of the WSJ, Saturday, January 20 - 21, 2018, doing the math, analysts suggest that AAPL will declare a special dividend of $2.35/share once the repatriation dust settles. In addition, the analyst suggests Apple will target $71 billion in share buybacks, and increase the dividend by $1.00/share over two years. The current (annual) dividend is $2.52. I can't post the electronic link because I'm reading this in the print edition. But I'm sure the story is easy to find for those interested.

Disclaimer: this is not an investment site. Do not make any investment, financial, job, travel, or relationship decisions based on what you read here or what you think you may have read here. If this is important to you, go to the source. And get your own cocktail napkin.

Disclaimer: I make a lot of simple arithmetic errors, but no algebra is required in accomplishing the the math above. A lot of assumptions were made, and a lot of data was taken from unnamed analysts, so the likelihood of any of this being accurate is pretty remote. On the other hand, the law of large numbers often holds, and the numbers themselves look very, very realistic.

Wow, it's hard to keep ahead of all this fake news. One has to always be on one's toes, as they say in the midwest.

It turns out it was fake news anyway. Whatever.

From a screenshot taken yesterday on a story reported the day before by CNBC. If it's a business story on CNBC, it has to be true. The screenshot: 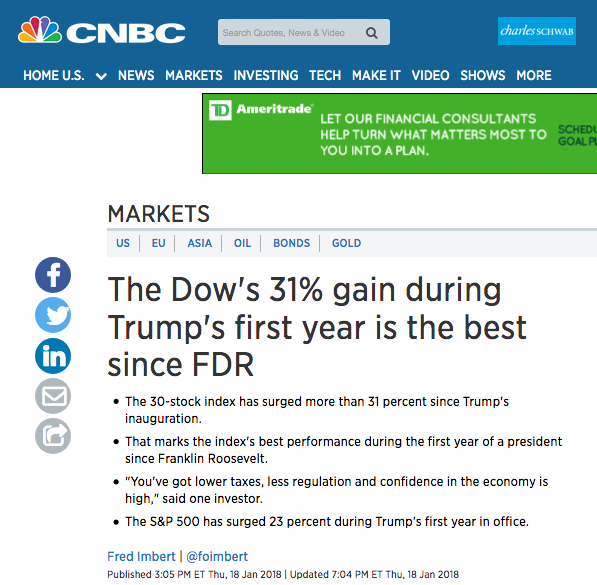 So many story lines, but I have to move along.

By the way, the Dow went from solidly negative to solidly positive at 2:23 p.m. Friday afternoon (yesterday) immediately after it was reported that Senator Charles Schumer had left the White House with no budget deal in hand, and by implication, the US was headed for a government shutdown.

That tells me the market was very, very happy with that outcome.

Idle Rambling On A Saturday Morning -- Something To Take One's Mind Off The Crushing Government Shutdown -- January 20, 2018

Wow, I'm in a good mood. A reader told me that one of the things he likes about the blog: the links to other sites, found on the sidebar at the right. I don't know if he's talking about links to other Bakken-related sites; other shale oil sites in general; other energy sites;, or the sites that have nothing to do with the Bakken or energy.

I've always said one cannot fully understand the Bakken without putting it in perspective. I don't often go to all the other linked sites -- there is simply not enough time -- but last night I went through the links of "non-Bakken featured blogs." I continue to be impressed by all of them, including:
At wind energy watch, I was particularly stuck by the situation in Hawaii. It turns out that the wind farms are killing bats. From the link:


Decades after the Hawaiian hoary bat was labeled an endangered species, its population remains a mystery to scientists – which is why Maui conservation groups are hesitant over one wind farm’s request to increase the number of bats it’s allowed to incidentally kill.

Kaheawa Wind Power II, a 21-megawatt wind energy facility on the slopes of the West Maui Mountains, wants to increase the number of permitted bat fatalities from 11 to 62 adults and nene fatalities from 30 to 48 adults over the next 15 years.

But this is how the wind developer responded to those concerned about the bats:


“Just because we’re killing more than we thought we would kill doesn’t mean we should get a permit to kill more,” Albert Perez, executive director of Maui Tomorrow, said during a public hearing Monday. “We may be undermining the recovery of the species. We have no idea because we don’t know the true population.”

“Just because we’re killing more than we thought we would kill doesn’t mean we should get a permit to kill more,”

The other sites had similarly interesting articles that I would otherwise miss.

I plead guilty. I've always said nuclear energy, along with coal, is/are the least expensive forms of energy. Maybe not.

It's a long, long story, but bottom line is this: when one factors int he cost of cleaning up a nuclear plant mishap/accident/disaster, those cost savings/cheap energy arguments disappear fairly quickly.

A reader alerted me to an update on the clean-up costs of the Fukushima nuclear power plant:


The government has said that it expects total costs for decommissioning, decontamination and compensation to reach 21.5 trillion yen ($194 billion).

I don't know what "$194 billion" means to the Japanese. But this puts it in perspective:


The national budget of Japan, a record-high, is somewhere north of $800 billion.  So, this cleanup will cost the equivalent of 1/4 of the nation's entire current budget.


According to Wiki, that number in 2012 was only $100 billion.  So, that number has doubled in 5 years. The bankers' convenient "Rule of 72" would work out to a 14 percent annual increase.  If I'm still around in 2022, I'll check, and will expect that cleanup number to be increased to $400 billion (roughly half of this year's budget for the entire nation of Japan)  What a crushing weight on that economy.

So, put that in your nuclear pipe and smoke it the next time someone, like me, tells you that nculear energy is inexpensive. Or better yet, tell it to the Japanese.

This is pretty cool. A couple of days ago I  posted my thoughts on where Jeff Bezos would site Amazon HQ2: Raleigh, NC. [Of course, running a close second would be northern Virginia due to the proximity of his Washington Post headquarters.] But I digress.

So, it was quite coincidental/timely that I came across United Van Lines annual "2017 United Movers Study"and the "North American Moving Services 2017 US Migration Report."

At the link to the United Van Lines, note the map is interactive.

The data appears very similar but I prefer the red/blue/grey map that North American has.

Glad you asked. A screenshot of a google search earlier this morning: 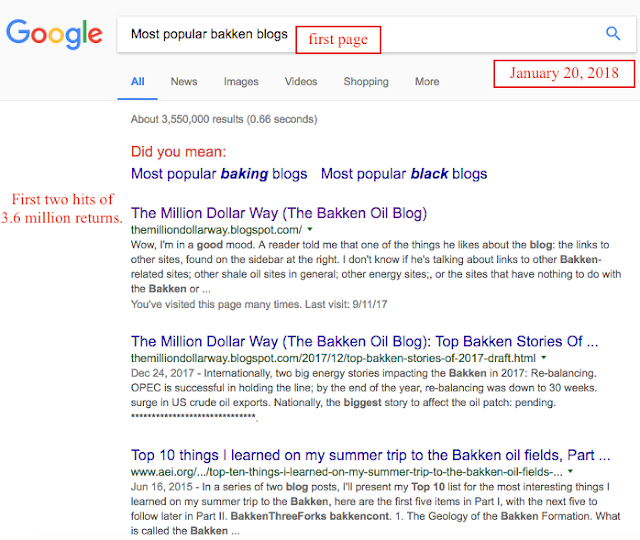